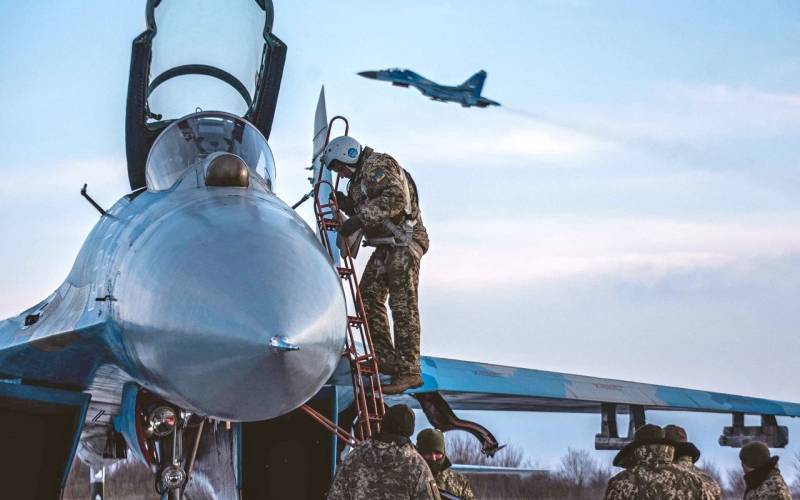 While in Brussels (according to the official statement made personally by the NATO Secretary General) they are scratching their feathers, drawing up “Russia’s written response to its security proposals,” things are happening in Ukraine that indicate that our country cannot count on any understanding from the Alliance account for. The process of “military development” by its members of the territory of the “nezalezhnaya” has not only not been stopped, or at least “paused” - its pace has been sharply accelerated, and the volumes have increased significantly. The outrageous “warnings” about the coming “invasion” do not subside, in the performance of the West they have already reached the level of some kind of mass psychosis. Simply put, if we consider the situation in the context of Moscow's demands, then they are carried out by those to whom they were addressed, exactly the opposite.


It should be noted that everything that is happening does not in any way look like “resolute support for Ukraine”, which its “partners” trumpet from every iron, but, again, is a set of actions leading to directly opposite results. Destabilization of the country economic, social, политическаяare growing literally every day. It is impossible to get rid of the feeling that the "collective West" takes all its steps towards Kiev solely on the basis of the principle "the worse, the better." Let's try to figure out why this happens and how it can end.

British lion off the chain

Despite the fact that one of the main points in the security proposals put forward by our country to the North Atlantic Alliance is precisely the complete refusal of both this organization as a whole and individual countries included in this military bloc to deploy their weapons and military contingents in Ukraine, Before our eyes, another stage of “pumping up” the Armed Forces of Ukraine with Western military supplies is taking place. As it became known, the other day in Lvov, near which the Yavorovsky training ground is located, officially considered the main storage place for the “allied military aid” imported into the country all these years, the An-124 heavy transport aircraft landed. Tellingly, he arrived there after making a flight to the American Huntsville - the very one near which the Pentagon's Redstone Arsenal is stationed. Another batch of Javelins? Or is this time something more serious?

The carrying capacity of the “board” that was dangling across the ocean leaves enough room for very bad guesses and assumptions. At the same time, the British lion, again, apparently determined to show his teeth to Russia, seemed to have broken the chain. The English warriors, who until recently were mostly preoccupied with drawing up plans for the fastest possible “drape” from the “non-inflatable”, are driving there one transporter with weapons after another. In just one day, at least five heavy cargo aircraft C-17A Globemaster III of the Royal Air Force of Britain landed in Kiev. They all had to go around German airspace - Berlin categorically denies the fact of its official closure for the "allies" carrying deadly cargo to Ukraine, but the fact that smart Germans are trying to the last to distance themselves from the madness that is happening now is obvious.

Gentlemen from the banks of the Thames, in fact, do not hide at all that they are massively transferring all new batches of lethal weapons to the "non-supplied" - NLAW anti-tank systems, which are, so to speak, "Javelin" on minimal wages. Moreover, their RC-135W Rivet Joint reconnaissance aircraft are working almost continuously over the territory of Donbass. Also, the reconnaissance "board" of the US Air Force Boeing E-8C has recently been once again seen in the Ukrainian sky. It is worth remembering that this aircraft is, among other things, a machine that serves for combat control and target designation. And what should he do in the area of ​​the Russian-Ukrainian border, where, as a rule, he carries out his flights? The question, however, is rhetorical, so let's get back to the topic of anti-tank systems.

Watching how many of them are brought into the “non-independence” of its “benefactors” from NATO, it is impossible to get rid of the question: “Are there really only idiots sitting in the Pentagon, as well as in the British General Staff?” That is, those who firmly believe that in the event of a hypothetical operation to "enforce peace" in Kiev, our army will attack exclusively with tank and motorized columns, and will attack "head on", regardless of possible losses? In principle, given the nonsense from Washington about “warm weather, which stopped the Kremlin’s invasion due to the inability to use heavy machinery", then yes. However, no matter how attractive the version of the idiocy that struck the generals of the Alliance, the answer is most likely different. No, if NATO really decided to prepare the Armed Forces of Ukraine for a serious confrontation, as they say, at any cost, the range of supplies would be completely different. First of all, these would be air defense systems - and not MANPADS like the Stinger, but something much more serious. Well, and military aviation, of course - at least its samples of Soviet production, available to the Ukrainian "aces".

However, nothing of the kind is even in question. The Armed Forces of Ukraine continue to supply anti-tank systems, which in the conditions of modern warfare (with the alleged "most likely enemy") will help them like dead poultices. Let me guess for what purpose all this is being done. Neither the Americans nor the British absolutely need the "indestructible defense" of Ukraine. And what do they need? Yes, the “correct picture” for numerous television reports, in which everything will be extremely clear even for the average Western viewer, who has recently become pretty dumb due to the current “standards” of local, pardon the expression, journalism. Look - these, on tanks, are definitely "aggressors". But those others who are trying to stop the steel monsters with hand grenade launchers and man-portable missile systems (our systems, ladies and gentlemen, ours!) are without a doubt “courageous defenders of Ukrainian sovereignty and democratic values.” Here, no one will confuse!

Again - the tanks on both sides of the "front" are approximately the same (well, certainly not the "Abrams"!) - at least in the eyes of Europeans or Americans. So the necessary scenes can be filmed somewhere at the training ground. In the same Yavoriv, ​​by the way... At least cut me, but I personally am not able to find any other acceptable explanation for such a strange “military assistance” that NATO is providing to Kiev today. If you want, offer better. The transfer to the country of very specific types of weapons, as well as foreign special forces in scanty quantities (in this matter, Canada was noted after the United States and Britain) terribly looks like preparing for another “television war”, the main battlefield of which will be CNN broadcasts and them similar "main calibers" of the shameless propaganda of the West. It is to such a war, which will inevitably turn into a catastrophe for it, that the "allies" are trying to send Ukraine.

However, the matter, as they say, smells of "kerosene" for Kiev already now - and very, very clearly. The incessant irresponsible chatter of the State Department, the White House and others like them about the fact that "Putin is about to attack" played a cruel joke, first of all, with the Ukrainian economy. Money, as you know, loves silence - this is an axiom. Foreign investors, who were not particularly eager to invest in the “non-debt”, having heard about the “imminent invasion”, unanimously pricked up the way out, out of harm's way. Now they are massively buying up foreign currency on the Ukrainian interbank market, withdrawing their capital from a country in which, even without any war, the devil knows what was going on, and now it is completely unknown what to expect.

The Ukrainian hryvnia went into "free flight" - however, along the trajectory of a heavy brick that fell off the roof. It has been falling for several days in a row, and the bottom has clearly not been reached. From issued by Kiev as a "means of last resort" in large quantities of domestic government bonds, non-residents get rid of, like plague bacilli. Since the beginning of this year, they have “dumped” them by more than 5 billion hryvnias (13.5 billion rubles). By the way, the “nezalezhnoy” Ministry of Finance was just about to place new OVZGs on the market, but there is a strong suspicion that buyers for them are unlikely to be found. Adds negative and one more factor - a rise in price in the world oil markets. Goldman Sachs has been threatening $100 per barrel for a long time, and the exchange dynamics fully confirms these forecasts. For the “nezalezhnaya”, the remnants of the economy of which are already suffocating from expensive gas, a sharp increase in fuel prices with an equally sharp fall in the national currency can become a “finishing blow”. Do they understand it in the West? Without a doubt. However, who cares!

Literally today, a "dear guest" - US Secretary of State Anthony Blinken - is expected to visit Kiev. At the same time, it cannot be said that the Zelensky administration is ready to welcome him with open arms. They are frankly afraid that an overseas emissary will come in order to carry out "coercion to Minsk." And in general, “it will try to force Ukraine to kneel before the aggressor,” acting within the framework of some “secret agreements” reached by Moscow and Washington, either during recent talks in Geneva, or in the process of communication between the leaders of the two states “by direct wire.” It sounds very optimistic (for the residents of Donbass, at least), but very little seems to be true. Not so long ago, the director of the CIA, William Burns, already visited the capital of the "nezalezhnaya", who would have had enough authority to "set the brains" of Zelensky and the company.

Nevertheless, there are no signs that this brotherhood intends to take at least some steps to reduce tension in relations between our countries. Rather the opposite. And the hypothetical "peacekeeping" goals of Blinken's visit to Kiev do not fit in with the actions of Washington and London to whip up military psychosis around Ukraine and within it. Alas, much more the current events look like the final act of preparation for the very “war with Russia to the last Ukrainian”, which the West has been clearly targeting since 2014.
Ctrl Enter
Noticed oshЫbku Highlight text and press. Ctrl + Enter
Reporterin Yandex News
Reporterin Yandex Zen
36 comments
Information
Dear reader, to leave comments on the publication, you must sign in.