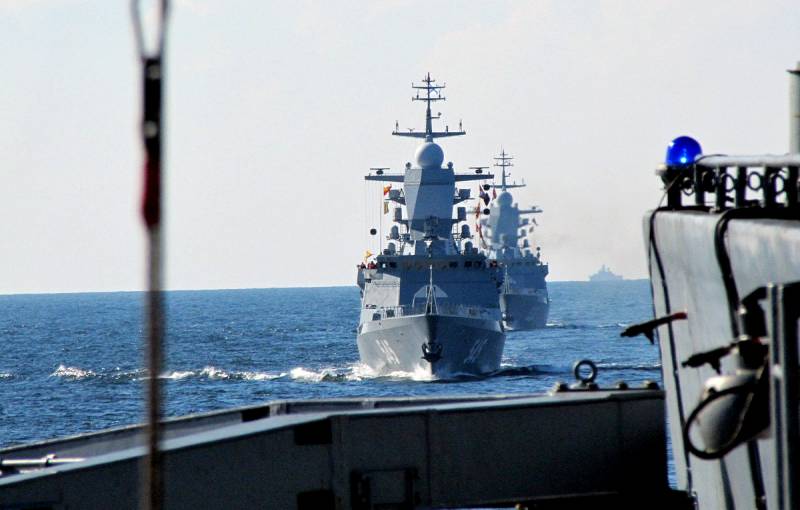 Negotiations between Russia and NATO on non-expansion of the bloc to the East have reached an impasse. Since "Putin's ultimatum" was not taken seriously by our Western partners, the question arose about the promised response of a military-technical nature, for which there is no specifics yet. From the lips of the Deputy Foreign Minister of the Russian Federation, Sergei Ryabkov, it was said that he, the answer, could be "through the Russian Navy." What are the options here?

Initially, when there were hints from above about the possibility of a repeat of the Caribbean Crisis, it was assumed that Russia could once again deploy its nuclear missiles in Cuba, as well as in Venezuela. Career diplomat Sergei Ryabkov did not directly either confirm or deny this, leaving journalists, bloggers and the jingoistically minded public with a wide space for conjecturing all sorts of "cunning plans".

Alas, you cannot step into the same river twice. The Russian Federation is far from the USSR, too much water has flowed under the bridge, and the Cubans themselves no longer need Russian nuclear missiles in Cuba. Havana is objectively interested in building constructive relations with the neighboring United States, which is why it is contraindicated for it to provoke Washington so openly. Our medium-range missiles are also not needed by Venezuela, which is a party to the agreement on the non-proliferation of nuclear weapons in Latin America. Theoretically, it is possible for a Russian military base, air force or naval base, to appear there on the island of Orchila, but for this, Caracas will first have to make appropriate changes to its Constitution. In detail about all this, we reasoned earlier.

And what then remains? How can the Russian Defense Ministry designate the US nuclear threat in their underbelly? How to make it so that not only military experts, but also ordinary American inhabitants, tense up, and their worried public opinion shakes the external policies White House in a more peaceful and constructive direction?

The myth of the "great land power"

The above-mentioned Deputy Foreign Minister Ryabkov was forced to make a clarification that retaliatory measures may not be through the Strategic Missile Forces, but already the Russian Navy:

The President of Russia has repeatedly spoken out, including on this topic, what measures can be taken, for example, in the line of the Russian Navy, if things go completely in the direction of provoking Russia and further strengthening military pressure on us from the United States.
Unfortunately, we will have to state that the Russian Navy today is not able to effectively fulfill the task of intimidating the "hegemon". After the collapse of the USSR, they actively and stubbornly imposed on us an openly sabotaging installation that Russia is exclusively a “great land power”, and it simply does not need a powerful navy capable of operating in the far sea and ocean zone. Allegedly, SSBNs are enough for nuclear deterrence, SSBNs for "killing aircraft carriers", as well as a "mosquito" fleet, consisting of corvettes, RTOs and frigates, to protect their coast. Why do we need cruisers, or, even more so, these aircraft carriers of yours, fu, do not.

Let's now see how we approached the potential Caribbean Crisis 2.

Let's start with the strong side of the Russian Navy, which is traditionally considered a submarine. Indeed, we have submarines, and quite a few, nuclear and diesel-electric, capable of carrying cruise and intercontinental ballistic missiles. But there are also problems. All our nuclear submarines are continuously monitored by the naval forces of the NATO bloc. The Russian surface fleet is still unable to ensure the guaranteed safe deployment of SSBNs in combat patrol areas.

But let's say the Kremlin decides to demonstrate its determination to use nuclear weapons by arranging large-scale exercises with Borei and other SSBNs. It should be borne in mind that the effect may be the opposite. The simultaneous mass deployment of SSBNs in the Pentagon may be considered preparations for a preventive nuclear strike, to which the United States will respond symmetrically by withdrawing all of its submarine missile carriers, as well as raising the remaining components of the "nuclear triad" on combat alert.

The degree of pre-war tension will rise radically, and then the "Caribbean Crisis-2" will be ensured. The question is whether we need it, and how to get out of it later. Could it not turn out that the man-made crisis will end not with NATO's withdrawal from Ukraine, but, on the contrary, with the deployment of American nuclear missiles there to "deter the aggressiveness of the Kremlin"?

But, for example, the task will be set not to frighten Washington with the real prospect of a nuclear war, but to meaningfully portray the military presence of Russia in the underbelly of the United States so that there are many beautiful photographs, videos and a flurry of analytical articles in the American military and near-military publications. What do we have for this here and now?

Unfortunately, very few. What has been built for the Russian Navy in recent decades, except for submarines? Small missile ships, corvettes and "semi-frigates" of project 11356, which are actually modernized patrol ships. Of the really good ones, it is necessary to mention the Project 23500 frigates, which have great potential, but so far only 3 of them have been built. Only they have a decent air defense system "Polyment-Redut", and will be able to operate in the far sea zone, and those built according to the modernized project 23500M - in the ocean. But, alas, all this is not the most immediate prospect. This "mosquito" fleet cannot be sent anywhere in the Caribbean.

Large surface ships suitable for such a task can be counted on the fingers of each of our fleets. In the Northern Fleet, this is the Peter the Great TARKR, which has long been in need of modernization. Soon it will be replaced by a fellow project "Admiral Nakhimov", which will be the most combat-ready Russian ship. Also, this is the Marshal Ustinov missile cruiser, two project 1155 BODs Vice-Admiral Kulakov and Severomorsk, the project 956 destroyer Admiral Ushakov and 2 fresh project 22350 frigates - Admiral Gorshkov and Admiral Kasatonov. That is, only 7 ships.

In the Pacific Ocean there is a Varyag missile cruiser, 2 BODs of project 1155 Admiral Tributs and Admiral Panteleev, turned into a frigate from the BOD of project 1155 Marshal Shaposhnikov and the destroyer Fast. We counted 5 ships. On the Black Sea, one can mention the colleague of the Varyag and Marshal Ustinov under the project missile cruiser Moskva, as well as three satisfied new frigates of project 11356: Admiral Grigorovich, Admiral Makarov and Admiral Essen, plus 2 patrol ships project 1135 "Okay" and "Inquisitive". A total of 6 more ships capable of going to the far sea zone.

And what can we do with all this goodness? Send all 7 surface ships of the Northern Fleet to the Atlantic to the East Coast of the United States, and 5 KTOF ships to the West Coast to conduct naval exercises? If you send everything, then who will then perform combat missions at home, and if less, it will look completely undignified. Collect from the pine forest KUG (ship strike group) from all fleets and send it to conduct maneuvers somewhere in the Caribbean? It is possible, but such events require careful preparation and preferably their own naval base or at least a PMT in the region.

So, what is next? Well, our ships will shoot at training targets there, they will conduct exercises to hunt submarines. What exactly will be the threat? The US Navy is totally superior in strike power to anything that the Russian Navy can put up and send to the American coast. One of the main problems of Russian surface ships is a weak air defense system, and this despite the fact that in which case they will have to fight at sea not with other enemy surface ships, but with its carrier-based aircraft. The Admiral Nakhimov will last the longest, but in a real clash with the AUG, our KUG simply has no chance of surviving. By the way, almost all ships of the Russian "mosquito fleet" were built with very weak air defense. Considering that the US Navy is built around the "far arm" of aircraft carriers, it is generally unclear with whom and how they are supposed to fight.

In general, without an escort of an aircraft carrier capable of covering a ship group from fighter attacks from the air, poking somewhere into a distant sea and ocean zone is a suicidal adventure. The Russian Navy is simply unable to perform real combat missions there, and our Western partners are well aware of this.

It is possible that the frankly wrecking attitude about Russia as an exclusively “land power” initially came from them in order to completely nullify our potential in the oceans. And, it must be admitted, they succeeded. We are now counting on our fingers 40-year-old Soviet-built ships and massively building a "trifle" that is absolutely defenseless against American and NATO aviation, we pray for the hypersonic Zircons, which in battle have nothing to aim at the target due to the lack of deck-based AWACS aircraft, and our aircraft carriers in general anathematized. Sailed.
Ctrl Enter
Noticed oshЫbku Highlight text and press. Ctrl + Enter
Reporterin Yandex News
Reporterin Yandex Zen
34 comments
Information
Dear reader, to leave comments on the publication, you must sign in.