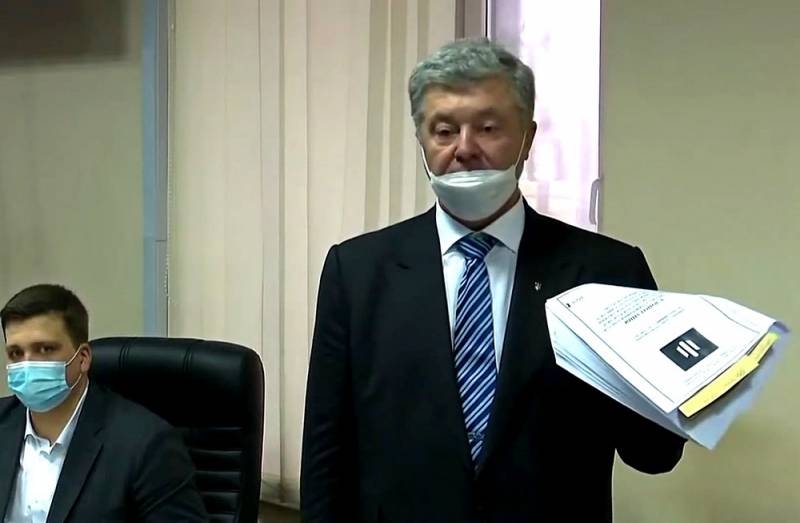 The plot, which began with the landing at the Kiev Zhuliany airport of a flight from Warsaw, on board of which was the ex-president of Ukraine Petro Poroshenko, could well have been a solid thriller - with political overtones, of course. Indeed, in this case, not only the liner of the low-cost airline Wizzair came in for a landing, but also its main passenger, who, immediately upon arrival in his native land, should, in theory, be met not with flowers, but with handcuffs. However, life has once again proved an indisputable truth: if the script is written by clowns, then we will not see, like our own ears, neither drama nor hard action.


The whole story with the return of the "prodigal president" and attempts to put him in a gloomy prison, as expected, resulted in an extremely miserable farce. True, the consequences of it may not be joking at all - and first of all, it is precisely for Vladimir Zelensky, who started this whole idea. At the same time, of course, he failed to bring his plans not only to victory, but at least to a loss with a minimal “loss of face”. Now he, most likely, will have to think hard about the essence of the well-known proverb about the one who sowed the wind and reaped the storm. Why did everything turn out the way it did, could it have happened differently, and what specific results should Ukraine and its “leader” now expect? Let's try to figure it out by analyzing the events of January 17 and their background.

Poroshenko is not Navalny, and Zelensky is definitely not Putin

The vast majority of those who carefully tracked the entire chronology of the arrival of the “sycho hetman” in the “nezalezhnaya”, where he was expected to be charged under more than solid articles of the Criminal Code (and this, for a moment, is “high treason”, “financing terrorism” and “creating a terrorist organization"), they agree on one thing - this show was staged in such a way as to evoke a maximum of associations with Alexei Navalny's arrival in Moscow exactly a year ago. At the same time, it should have been clear to everyone: Poroshenko in this scenario was assigned the role of “the leader of the opposition persecuted for political reasons”, and Zelensky – “an insidious and vicious tyrant and satrap”, trampling on freedom and “democratic values”. The fact that a self-respecting tyrant should be shod in forged boots, and not in clown shoes with pompoms, was somehow not taken into account. That's why everything went wrong.

At the airport, of course, there were employees of the “search” for the ex-president of the State Bureau of Investigation, who seemed to have made a timid attempt ... No, no, what are you! Do not even detain the “syvochol”, but at least give him a subpoena. Poroshenko, in his trademark manner, molested the nasty ones and simply fled - according to some reports, he also traditionally swore at them in the purest Russian. The lawyers of the “sufferer” categorically did not want to take the “kaku” in their hands, saying that he would appear in court anyway. Surprisingly, they didn't lie. However, there is nothing surprising here, of course. In the event that the authorities had really serious intentions regarding the runaway ex-president, he would have been harshly "received" by the same State Bureau of Investigation - moreover, at the gangway. Another question is what kind of trouble the Poroshenko fans who had gathered at the airport would have caused ahead of time. But nothing like that happened.

Having allowed the “traitor” to enter the country calmly and even somewhere almost triumphantly (to the heart-rending cries of “Ukraine needs Gunpowder!”), Zelensky lost not even the first round, but the whole fight. If the ex-president had any doubts about his own fate and the degree of danger that his opponent's actions might pose for him, now they have disappeared completely. Yes, Poroshenko is by no means a puppet of Navalny, who dutifully trudged along to play the role of a “sacred victim” at the behest of Western curators and shamefully burned even on it. On the “syvochol”, who survived and betrayed a lot of his own predecessors in the presidency, there is no place to put stigma for a long time - in the field of cynicism and the ability to “calculate moves”, he can give an inadequate jester not even a hundred, but a hundred thousand points ahead. Zelensky once again, one might say, blamed himself - for nothing and on his own idiotic initiative, having provided Poroshenko with such crazy PR, for which, perhaps, Petr Alekseevich's huge capital would not have been enough, had he taken it upon himself to buy with his hard-earned airtime and bands in various publications that he got for so.

Naturally, on his way to the Pechersk Court, which, in fact, was supposed to choose a preventive measure for the VIP accused who deigned to come home at 11 a.m. Kiev time, the ex-president held a number of rallies at which he mercilessly branded "green bastards ”, which are “only a causal place to play on the piano” much. Well, and another country to plunder. All this "green evil spirits", mentioning that it is typical not only for one Zelensky, but also for Kolomoisky to the heap, Poroshenko urged "to fight like Putin." Russophobia "hetman" remained at the same level. The greeters breathed a sigh of relief - it was definitely him, and not a double changeling!

"January 17 was the beginning of the end of green indecency..."

This phrase, uttered by the triumphant Poroshenko after the most disgraceful (for the current miserable Kiev authorities) court session, cannot be attributed to the field of empty boasting, which, let's be frank, the "hetman" sinned more than once. No one even tried to stop his motorcade (mercilessly violating all traffic rules) on the way to the capital. No one put up the slightest obstacle to the construction of stages and other structures for holding rallies of Poroshenko's supporters. All the actions of the "attacking side" - that is, Zelensky's office, from which the initiative to "send Poroshenko for landing" came from, were of a pronounced idiotic nature. For some reason, the defendant was appointed ... a free lawyer (this is with his financial and other possibilities!). At the same time, the bar association stated that they were following the instructions of the State Bureau of Investigation, and the State Bureau of Investigation stated that they had not asked for anything of the kind and that all this was a “provocation”.

The trial began almost an hour late, allowing Poroshenko's supporters to gather under the building in sufficient numbers to block or even capture it. Well, this is normal Ukrainian practice, and then the defendant filed a motion to transfer the hearing to another court, which was rejected. On the website of the Ministry of Internal Affairs of Ukraine, they suddenly “posted” the profile of the ex-president as “wanted”. At the same time, the prosecution filed a motion to select detention with a bail of 1 billion (!) hryvnias, which is equivalent to 35.7 million dollars, as a measure of restraint. If it is submitted, Poroshenko will be required to surrender all international passports, wear an electronic tracking bracelet without leaving the Kiev region, and appear at the investigating authorities on demand. For a person who has only officially declared a fortune of 50 million dollars and 420 million hryvnias (1.13 billion rubles) - the amount is feasible. But here it is a matter of principle.

Poroshenko’s defense insisted that the whole case against him (on charges of creating an artificial shortage of coal in the country in order to start buying it from the DNR and LNR) is nothing more than a “politically motivated fake”, with the help of which Zelensky and his associates are "trying to discredit the opposition and deprive it of its leader." Well, fake or not is debatable. On what only Pyotr Alekseevich did not "weld" during his own presidency ... But as for political motivation - here in the "top ten". The clown who has seized power in all seriousness imagines himself to be the one who is able to crush any dissent in the country - no matter the "pro-Russian" or "patriotic" sense. No wonder that Viktor Medvedchuk and Poroshenko are involved in the same case. However, Zelensky clearly overestimated his potential. Poroshenko, unlike him, a hard-core politician, made this very clear after just one event.

With a sharp condemnation of the actions of the current government, none other than the British Ambassador to Ukraine Melinda Simmons, who in a rather specific form advised Ukrainian politicians to "immediately unite against Russian aggression, and not be distracted by a showdown," came out. The West did not support Zelensky in his ridiculous attempts! And this is an unequivocal defeat in Ukrainian realities. That's why the "hetman" in court demanded that the prosecutors "repent", and advised the current president to "stop taking drugs." One step away from the abyss, they don’t behave like that – in any case, characters like Poroshenko. Already entering the building of the Pechersk Court, he would be sure of his victory. And, as it turned out - absolutely not in vain.

What happened in the “temple of justice” after the debate of the parties, when the judges retired to the deliberation room to deliver a verdict, can only be called clowning. The “thoughts” of the servants of Themis dragged on hour after hour, giving rise to rumors one more extravagant than the other. Then the version was put forward that the judge Alexei Sokolov, responsible for making the decision, fainted and was pumped out. Then they began to say that he simply ran away. On the rooftops, like Batman or Spider-Man. True, the dominant opinion was that all this time there were many hours and extremely tense negotiations with Zelensky’s office, from where the judge was tempted and intimidated, inclining to caulk Poroshenko “for bailiffs”, and he, cordially, fought back as best he could, referring to the fact that that he still wants to live. One way or another, but after exactly five hours (!) of silence, the representatives of the court said: no preventive measure would be chosen today. New hearings will take place in two days, on January 19. Poroshenko celebrates a complete and unconditional victory.

According to many observers and political experts, wanting to destroy his obvious competitor in the fight for a new presidential term, Zelensky not only “revived him as a politician,” but also raised him in one fell swoop to previously unattainable heights of ratings and popularity. Be that as it may, but hundreds of people were on trial for more than half a day - despite the most disgusting weather (in Kiev, piercing snow and rain charged like a sin) and, apparently, they were ready for the most radical actions for "salvation" and release "sychol hetman". The fact that it did not come to this is the main positive result of the alarming January 17th. Many people of Kiev, not looking up from the tape News, in all seriousness they prayed that by nightfall their city would not turn into a new Almaty. Taking into account the fact that all the action under the Pechersk Court was led by such characters as Alexander Turchinov, Andriy Parubiy, Yuriy Lutsenko - the most crazy and bloody figures of the "Euromaidan", the prospects for such a scenario were, and very serious. This time it has passed, but there is no doubt that Ukraine is on the verge of serious political upheavals.
Ctrl Enter
Noticed oshЫbku Highlight text and press. Ctrl + Enter
Reporterin Yandex News
Reporterin Yandex Zen
11 comments
Information
Dear reader, to leave comments on the publication, you must sign in.