"Fifth column". Will Russia be able to cope with its main misfortune? 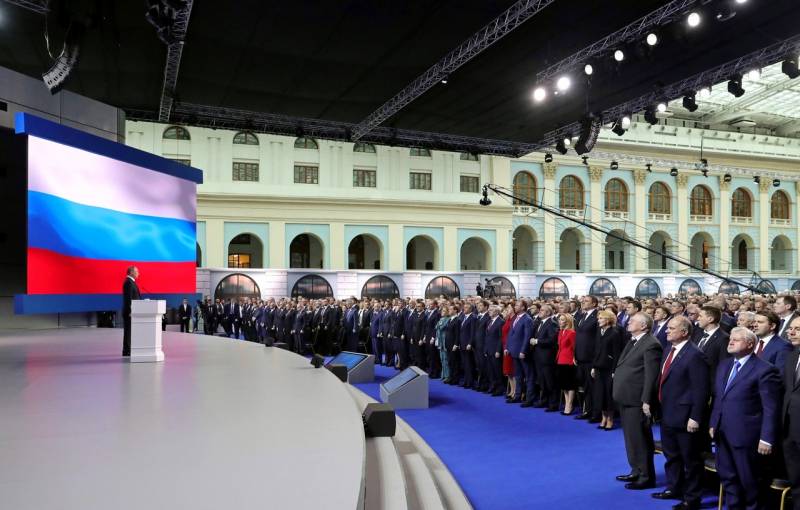 Recent events in and around Kazakhstan have given rise to a real storm of discussions around the prospects for the formation of Russia's influence in the so-called "post-Soviet space" and possible ways of transforming and developing this very space - both positive and not very good. At the same time, for some reason, one rather important and, at the same time, very unpleasant moment was overlooked: how the Russian-led CSTO peacekeeping operation in the former “fraternal republic” was reacted not even by the mediocre “world community”, but by our dear liberal- democratic party. The one that sane people with good reason call only the "fifth column" of the West.


It is clear that against the backdrop of fairly successful foreign policy actions of our country, there is no desire to talk about nasty and shameful things. And you can, of course, simply give up on the next performance of the “best representatives of the creative class”, stamped by someone with the very well-aimed word “demshiza”, spit and, as they say, grind. It's just not worth it to do so. And not even because this public once again, in front of everyone, allowed itself to defiantly blaspheme the country, which many of its representatives turn their tongues to call the Motherland. Ignoring such actors, and even indulging their ridiculous, at first glance, but in fact, extremely dangerous activities have more than once cost Russia too much. It is these mistakes that we must comprehend - so as not to repeat in the future.

Pathological hatred for the native state, its power (whatever it may be - monarchical, Soviet or elected in the most democratic way), the army, law enforcement agencies and special services has always been and is now the cornerstone of the life position of that group of our compatriots, swollen with self-conceit, that declared themselves "the brain and conscience of the nation". In other words - "intelligentsia". This ugly, contrived term (as well as against its bearers) was opposed by many of the best minds in Russia - philosophers, writers, scientists, not to mention statesmen. This, however, did not in the least prevent the self-proclaimed "rulers of thoughts" from judging everyone around and for everything, passing verdicts of "cosmic proportions and cosmic stupidity" that are not subject to appeal. It could not be otherwise, because most often this audience climbed into those matters in which they did not understand (and a priori could not understand) at all.

No, to sheer horror, when your "priceless" opinion about policy actors of various levels and pop singers are eager to express the state and the ways of its arrangement by mouth, it did not come right away. However, even during it, the things that the domestic “liberal intelligentsia” chipped away went far beyond common sense and the most ordinary sanity. The famous story with a congratulatory telegram, which they intended to send to the Emperor of Japan during the most difficult war between Russia and this country (after the defeat of our fleet in the Battle of Tsushima), St. Petersburg studiouses and, so to speak, "joined them" figures with the same brain dislocation, often try as a historical tale. And then - and the provocation of the "sinister tsarist secret police." Let me doubt - firstly, references to this shame are found in a fairly large number of sources (in particular, in Vladimir Purishkevich, who is not at all prone to fantasies), and secondly, this corresponds to the “spirit and letter” of the worldview of our “bright-skinned” all 100%.

However, here is another example, which certainly cannot be attributed to fiction or “police provocations”. If only because it is a quote from the famous work of Alexander Herzen "The Past and Thoughts": news, and with tears of sincere joy in his eyes, he handed them a newspaper ... Engelson, as usual, jumped, kissed everyone in the house, sang, danced ... three Poles rode from London to Twickham, without waiting for the railway train, to congratulate me. .. I ordered champagne to be served - no one thought that it all happened at eleven o'clock in the morning or earlier ... On Sunday my house was full in the morning; French, Polish refugiers, Germans, Italians, even English acquaintances came and left with a beaming face ... "What is it with such unrestrained scope, with such fury that this "outstanding Russian revolutionary publicist" is celebrating, as most encyclopedias and biographical directories represent him ? And the death of Russian Emperor Nicholas I! God bless them, with political views (although such jubilation pretty much smacks of cannibalism in any case). But here's the catch - it's 1855 in the yard.

The Crimean War rumbles with might and main, the heroic Sevastopol is about to fall, defending which many thousands of really best Russian people laid down their lives, foreign invaders are attacking our Motherland from the White Sea to the Black Sea, from the Far East to the Caucasus. And at the head of this horde are just the very British with whom the "Russian" Herzen kisses. Okay, dancing, as they say, on the grave of "Engelson", which is, as you might guess, one of the "classics" and "founders" - this one has always been a beacon of Russophobia. But you, dear sir Alexander Ivanovich, seem to write in Russian according to the patchport. Although ... What kind of Russian is he - if he is a liberal intellectual?!

The “Russian Congress of Intelligentsia”, which burst out with an angry statement about the entry of the CSTO peacekeeping contingent into Kazakhstan, is a direct and more than worthy successor of precisely these vile traditions. All the same transcendent pride, in which the signatories of this piece of paper consider themselves entitled to judge and broadcast "immutable truths." You see, they are “strongly against the suppression of protests in Kazakhstan” and consider the participation of Russia and its law enforcement agencies in the events there a “crime”. At the same time, gentlemen and ladies from the demshiza, of course, most sincerely wish the "Kazakh people" to "get rid of the corrupt dictatorship" and achieve "success in building democracy." Well, as in Ukraine, presumably. Shot and stabbed to death in the process of this very "deliverance" and "building" Kazakh soldiers, officers, police, of course, do not count. Yes, in fact, they are the way to go - in the opinion of our liberals. After all, they were miserable servants of the "corrupt dictatorship", and not people. There is nothing to say about burned buildings, shops and banks completely looted, houses and apartments of the most ordinary citizens demolished by marauders. These are “inevitable sacrifices on the shining altar of a great goal”! So, it seems, our Liberoids usually speak and write?

That's just very interesting, how would the same public howl, defeat the "peaceful protesters" of their favorite restaurant or boutique? Something tells me - they would squeal like cut ones. Everything in their false "conversion" is hypocrisy and lies - from the first to the last letter. “The citizens of Russia should not kill and die saving the corrupt regime” – this is after it has been said a hundred thousand times that peacekeepers will not be directly involved in suppressing the riots. “The participation of Russian soldiers in the suppression of protests in Kazakhstan will worsen the situation of the Russian-speaking citizens of this country”... Well, here it is, in general, a masterpiece!

The joke lies in the fact that the absolute majority of the signatories of the quoted "appeal" vehemently and consistently denies the idea of ​​protecting Russian (Russian-speaking) people outside our state. What "Russian world"?! From these words they are more purer than an unclean spirit from incense. Immediately start screaming about "imperial ambitions" and the like. And then suddenly the gentlemen of the liberals were concerned about the fate of the "Russian-speaking"? You can't imagine anything funnier. And, by the way, it’s not a sin to remind them of something else - something like those included in “economic bloc” of the domestic democratic party, figures admired the liberal market reforms in Kazakhstan. The very ones that became, albeit not the true cause, but gave rise to a protest "explosion". By the way, they were carried out by the same “corrupt dictatorship”, which they now stigmatize with “righteous” anger. Duplicity and impudent lies, designed to hide the main thing - burning "advocates of high ideals" insatiable thirst for power.

Here is another “unbending fighter against the regime” – Garry Kasparov, who is playing the fool from the “beautiful far away”. This one was also so excited by the introduction of the CSTO peacekeeping forces that he began to broadcast about the "actual occupation of Kazakhstan." At the same time, by the way, he did not fail to "dunk" Pashinyan properly, who, according to the "prominent oppositionist", committed a "shameful and especially cynical act" because he "came to power as a result of a peaceful revolution." “You are not my brother anymore, traitor to the ideals of the Maidan! - this is what Kasparov's angry, pompous and nauseatingly false "rebuke to a traitor and a Kremlin hireling" sounds like in the prime minister's chair. Well, the main thing in his “appeal to the liberal Russian public” is a reminder that every extra year a dictator stays in power leads to a significant increase in the number of victims when he is overthrown.” That's what he (and all the "public" to which he broadcasts) really want! "Overthrows"... Hell Almaty, but only opened up on the streets of Moscow and St. Petersburg. Blood, fire and death.

So the campaign launched in Russia to suppress the activities of especially active centers and "mouthpieces" of our beloved demos is not only justified, but is also an indispensable condition for the country's survival in the fiercest confrontation that is now imposed on it by the West. No other way. The public, capable of rejoicing at the military victories of our enemy and dancing with a glass of champagne in its paws at the news of the death of the head of state, has already ruined Great Russia twice. Under no circumstances should we give her another chance. As you can see, no Gulag and "repressions" are needed to fight this dirty trick in modern times. Only the efforts of the authorities were more than enough to make the activities of the “liberal public” become so “dangerous and difficult” for its personal well-being that the pieces of silver generously released by the curators ceased to cover the usual fear for their own satiety and the well-established aristocratic life. The “sad people” stretched out to distant overseas lands, like sad nosed cranes - one after another, they only manage to line up in a wedge. Look, even the "fiery" Shenderovich deigned to drive off, to be, as he put it, "outside the homeland, but without a muzzle." “Outside of the homeland” is an interesting definition, you know. Iconic.

Many sharashkin offices have been closed - the same Memorial recognized as a foreign agent (the terrible harm that its activities caused Russia, by the way, deserves a completely separate discussion), many others, which I don’t want to mention here out of disgust. Cleansing is going right, but, as practice shows, it seems to be slow. In the very near future, our country, most likely, will face trials much more serious than its participation in the Kazakh events. Do we need an active "fifth column" at this fateful time? The question is clearly rhetorical.
Ctrl Enter
Noticed oshЫbku Highlight text and press. Ctrl + Enter
Reporterin Yandex News
Reporterin Yandex Zen
38 comments
Information
Dear reader, to leave comments on the publication, you must sign in.