"90% of the inhabitants of Ukraine will be thrown into battle." What are the Kiev authorities preparing for? 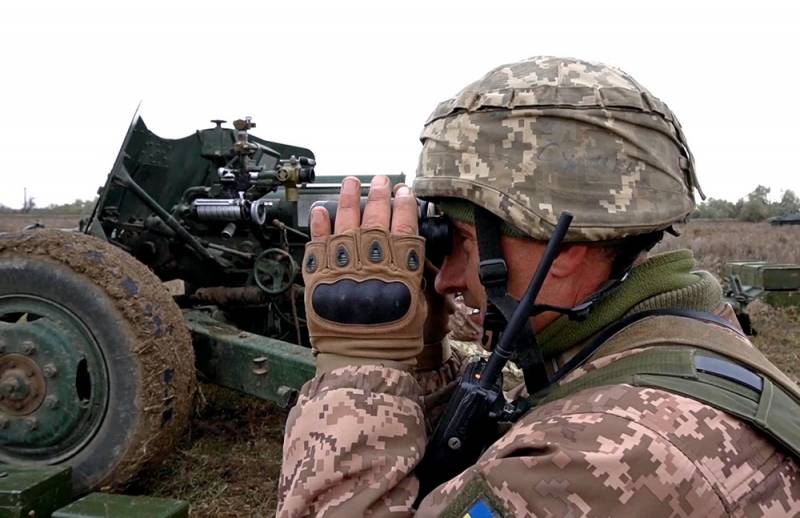 While tense negotiations are underway in Geneva and Brussels, during which, let's face it, the future fate of Ukraine is being decided, in this country itself, crazy ideas about the "impending Russian invasion" hysteria, which has recently become more and more unhealthy. With all this, those who today in Kiev (and not only there) are broadcasting about "the full determination of the Ukrainian people to breastfeed to defend sovereignty" and something else, it is well known that there is no "aggression" and is not expected. And, consequently, there is no need for massive hecatombs, which are seen in the inflamed imaginations of those in power "nezalezhnoy".


What is the interest of the "collective West", which in its conspiracy theories about the "sinister plans of the Kremlin" already reaches the level of frank absurdity, can be seen with the naked eye. Our "sworn friends" need reasons for introducing new sanctions and restrictions, with the help of which they seek to complicate and slow down the development of Russia as much as possible. Recently, this has been supplemented by the need to search for reasons in order to reject Moscow's legal demands for providing it with real security guarantees. All this, as they say, lies on the surface and does not need explanations. However, what kind of motives are driving official Kiev, which, playing along with its western "partners" in this matter, is being drawn into an increasingly dangerous game? Let's try to figure it out.

"More than 90% of Ukrainians will go into battle!"

Such a shocking statement was made in his interview to the British television channel Channel 4 news by the head of the office of the president of the “nezalezhnoy” Andrei Yermak a few days ago. Why shocking? First of all, due to the fact that (if, of course, such rhetoric is taken at face value), Kiev intends to send for slaughter not only every single woman and man aged 18 to 60, but also children with very old people. Yes, in fact, all Ukrainians without exception - with the exception of babies, hopeless invalids and non-ambulatory patients. A similar level of mobilization in the history of wars was attempted only in the Third Reich during the formation of the infamous Volkssturm. At the same time, the high-ranking official clarified that he was “absolutely sure” of his assessments.

True, he immediately quickly turned the conversation to what a "huge problem" and even a "verdict" it would be for NATO, the leaders of whose countries would have to "report to their citizens," why, after all, "the Russian invasion happened while they were negotiation". As if someone would actually do something similar and as if the residents of the Alliance member states do not give a damn about events outside their borders in the deepest way ... Let's return, however, to the loud statement of Pan Yermak and try to determine what it is based on and how much it can correspond to reality. Surely the head of the presidential office is counting on the law on “national resistance” that came into effect from the first day of this year in the “non-government”. In accordance with this, Ukrainians should move in orderly rows and thick columns to the military registration and enlistment offices in order to join the ranks of the so-called "territorial defense". There really is one in the country. However, what exactly is it?

In order to avoid accusations of “exaggerating colors” and other “propaganda tricks”, I will allow myself an extensive quote from the material “Civilians in Ambush. How the Kiev terrorist forces are preparing to meet the enemy ”, published on the RBK-Ukraine portal. Here is, perhaps, the most impressive moment in the story of the training of future “fighters against Russian aggression”: “The fighters ... do a strange thing: they get into a“ box ”as if they were sitting in a truck. Those who stand in front imitate the operation of the engine and set off along the road, as if in a column. Since the training is carried out independently, they do not yet have the required dimensions of trucks. Therefore, you have to work "on foot in a machine-like manner." The most important thing here is to remember the algorithm of actions during the shelling, to understand where each fighter who sits in such a car should move. And this part can be worked out on your feet ... "Here's another:" Who can - he trains with his weapon in order to get used to its dimensions. Those who do not have weapons receive wooden dummies, they are identical in size. After all, the main thing is to get used to them, to know how to hold the machine gun ... "," Everyone imitates shooting with a voice. "Puff-bang-bang" - this is a single shot machine guns. "Tra-ta-ta-ta-ta" - this is a conditional enemy crushed with fire by a machine gunner ... ".

You can endlessly enjoy the description of this schizophrenic parody of Zarnitsa, but the main thing in the article is different - its authors frankly admit: thousands of people "... A thousand! A metropolis with a population of three million, the capital, where the number of "patriots" after 2014, alas, is off the charts. And this is your 90%, Pan Yermak ?! Wouldn't be a disgrace already.

Cannon to the world ... But money is better!

It is clear that this kind of "preparation for war", during which unarmed and completely untrained "personnel" can only acquire the skills of onomatopoeia, is nothing more than a stupid farce. Yes, if such "warriors" were not 0.3% of the population (and this is the ratio for Kiev), but indeed 90%, there will be a little less sense from them in real military operations than none. Natural clownery - as, indeed, everything that is happening now in Ukraine. However, clownery with a very spiteful and selfish overtones. It is unlikely that Ermak and his patron, Vladimir Zelensky (behind whom the head of the office repeats "patriotic" nonsense almost word for word), are completely unaware of the realities of the country and by no means the warlike mood of its inhabitants. However, the main thing in their "messages" is that they sound 99 times out of a hundred in the process of communicating with journalists from Western media. The fact that not a single NATO serviceman will take part in the "battle with the Kremlin hordes" has been clearly and unambiguously explained to Kiev more than once. But what about throwing some money and weapons, military equipment and other material values ​​- these are Western "partners" with a dear soul.

Let's go over the messages that news The world's media tapes literally dazzled lately: “Estonian Defense Minister Kale Laanet has approved a package of military assistance to Ukraine. His department also intends to provide Kiev with anti-tank weapons, Javelin missiles and 122-mm howitzers ... " equipment... "" From the world on a thread, and to the naked - a shirt "- so do the Ukrainians themselves say?

Well, this, as they say, is a trifle, but something more serious: "The United States announced that, as part of the provision of military assistance in the amount of $ 200 million, it will transfer a radar system and some maritime equipment to Kiev ..." Also, the State Department clarified that some of the supplies within the framework of military assistance to Ukraine "have been carried out in the last few weeks." State Department officials said that the United States "will continue to provide this support in the coming weeks and months, using a number of mechanisms for this ..." This is already something! Of course, some kind of loan officer or other cash tranche would delight the clown president and his thieving entourage much more. However, the cunning characters who are now "driving" the "nezalezhnoy" will somehow find a way to use direct military supplies to their advantage. Do you think this is not understood in Washington? The fact that the natives-beggars need an eye and an eye there they realize in the most beautiful way.

Recently in the Ukrainian media there were reports that two “US advisers” - Chris Rizzo and Todd Brown - appeared out of nowhere in the country's Ministry of Defense. Interestingly, about which of the "offices" of the overseas "allies" these gentlemen represent, the "nezalezhnoy" Ministry of Defense is completely silent. However, they do not pull on regular military personnel, even in their appearance - their photos are published on the corresponding official website, and there are the most faces that are not accounting ones. Apparently, Washington has sent controllers to Kiev. The auditors, who must make sure that the handouts they receive from the Pentagon and the State Department are not taken away quite insolently. At least some part should still reach the local warriors - otherwise they will run around with wooden machine guns and yell "tra-ta-ta-ta".

With all this, Kiev, of course, needs to portray a certain semblance of "intensified preparations for war" that the "great strategists" from the United States, apparently, set out to lead to the last Ukrainian. Most surprisingly, the Americans never seem to have drawn any conclusions from their own Afghan failure. Local crooks fooled them for two decades, pulling out huge sums "for the needs of the army," which, as it turned out just last year, existed, for the most part exclusively on paper, and was simply surprisingly capable of fighting. Exactly the same thing is happening with Ukraine today. Having clearly understood what the overseas "benefactors" want from them, rogues like Zelensky, Yermak or the head of the military department Reznikov openly hang them on their ears and continue to do this exactly as long as their Russophobic-militaristic nonsense is encouraged by more and more handouts ...

However, this whole action has one more, not at all amusing aspect. I will end my story with one more quote from the same article that I referred to above. One of the participants in the “terrorist defense” told reporters the following: “We are ready in the first hours, if God forbid the war starts, to go out into the streets in our own outfit with our weapons. To quickly counter the "fifth column". For example, people who will try to blockade the troops, as it was in the Donbass at one time. " The militaristic psychosis fanned by Kiev is giving rise to monsters with might and main. "War games" may well end in very real blood - only the Ukrainians will kill other Ukrainians. Normal people who do not want war. And now this is already really scary.
Ctrl Enter
Noticed oshЫbku Highlight text and press. Ctrl + Enter
Reporterin Yandex News
Reporterin Yandex Zen
16 comments
Information
Dear reader, to leave comments on the publication, you must sign in.