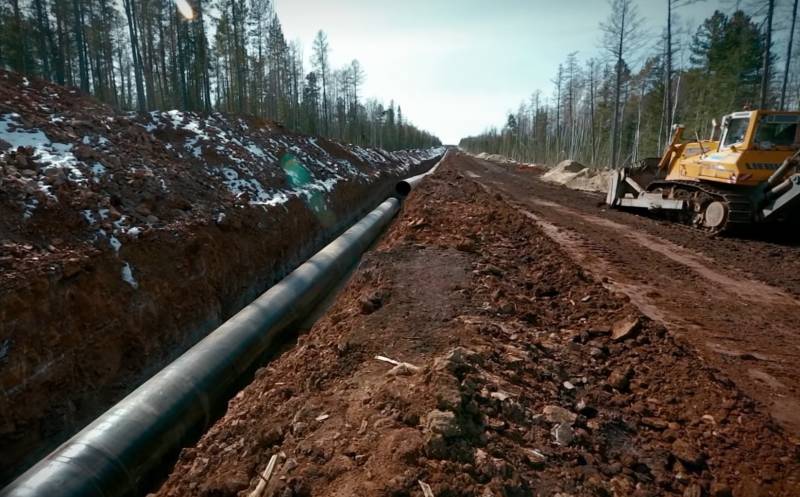 Russia is a huge country rich in natural resources. The critical dependence of the federal budget on the export of hydrocarbons abroad has been justly criticized, but objectively it will persist in the coming decades, which all our business partners use without a twinge of conscience. The Europeans have always talked with Gazprom across the lip from the position of “where are you going to get away from us,” while the Chinese are ready to take Russian gas, but only on their own terms. Things could change very soon.


As you know, the wealth of Russia is growing in Siberia and its gas fields. From the northern part of Western Siberia, "blue fuel" is traditionally exported to Europe, but for some reason it has not been favored there lately. Brussels decided to rely on renewable energy sources, systematically reducing gas consumption in the coming decades. To this day, the Nord Stream 2 pipeline cannot get out of the US sanctions. The Americans have long been threatening to squeeze Gazprom in the European market and fill it with their own LNG. True, against the background of the current energy crisis, all this looks rather amusing, but after all, none of the plans for "decarbonization" economics The EU and the US are not going to refuse.

Since our gas has fallen out of favor in Europe, logic dictates the need to find a new buyer for it, but which one?

The first step in an attempt to diversify export supplies was made with the launch of the Power of Siberia gas pipeline. Gazprom has pledged to supply China with up to 2159 billion cubic meters of gas a year via the new 38-kilometer pipeline. The total cost of the project was 1,1 trillion rubles. Power of Siberia began operating in 2019, but not at full capacity. The fact is that in the PRC all the infrastructure necessary for the project has not yet been completed, which is why the increase in exports is taking place gradually. Can Power of Siberia be considered a successful project?

This project is evaluated in different ways. The undoubted advantages, for example, can be attributed to the fact that thanks to him, the Amur gas processing plant, the largest in Russia and one of the largest in the world, will be completed and operational in the Far East. That is, there is no need to talk about the banal export of unprocessed raw materials. However, the big disadvantage of the gas pipeline, from the point of view of geopolitics, can be called the fact that it exploits fields in Eastern Siberia. Not Western.

In other words, Gazprom failed to create a certain threat to "cut off gas" to the European Union. They only managed to gain a foothold in the promising Chinese market. Quite different prospects open up in the event of the launch of Power of Siberia-2.

Before the EU authorities announced their plans for the total "decarbonization" of their economy in the coming decades, this project seemed wasteful pampering at the expense of the budget. In the new "carbon-free" reality, he received a new meaning of his existence. Gazprom will be able to supply China with up to 6700 billion cubic meters of gas a year via the main pipeline with a total length of 50 kilometers. From the fields of Western Siberia. From those from which the European Union is already supplied or may be supplied in the future. If necessary, the domestic monopolist will be able to redirect gas eastward from the Urengoi and Yamal fields.

And this has already caused real concern in the EU, where they are accustomed to their exclusive status as an uncontested buyer of "blue fuel" from Russia, who can turn up his nose at it and talk to Moscow through his lips. All the media vied with each other to quote the words of Dmitry Marinchenko, analyst at Fitch:

Gazprom will certainly continue to supply gas to Europe under long-term contracts, but the amount of gas sold on spot deals and in excess of the minimum contractual volumes may actually decrease. This may lead to the fact that Gazprom will cease to be a balancing supplier of the “last resort” in Europe, as part of the gas from the fields in Western Siberia will go to China. As a result, the gas market in Europe may indeed become more scarce, and peaks in consumption will be covered by LNG, which will have to compete with Asia.
50 billion cubic meters of gas per year is a lot.

The second step towards diversification of supplies was made with the development of domestic LNG projects. On the Yamal Peninsula, a consortium of companies NOVATEK (50,1%), the French concern Total (20%), the Chinese CNPC (20%) and the Silk Road Fund (9,9%) have established gas production, liquefaction and export by sea. Russian LNG is supplied both to the Southeast Asian market by the Northern Sea Route and to the European market.

The main competitor of NOVATEK, the state corporation Gazprom, entered the project of the Gas Processing Complex (GPK) being implemented by OOO RusKhimAlliance as part of the Ethane-Containing Gas Processing Complex (KPEG) in Ust-Luga. The plant will be able to produce at least 13 million cubic meters of LNG per year, which will make it a leader in the North-Western Europe region.

Thus, Russia, as a gas exporter, will be able to supply Yamal gas to both Europe and China, depriving its main buyers of their usual status of uncontested consumers, which will make it possible to demand an adequate price for its goods.
Reporterin Yandex News
Reporterin Yandex Zen
Information
Dear reader, to leave comments on the publication, you must sign in.