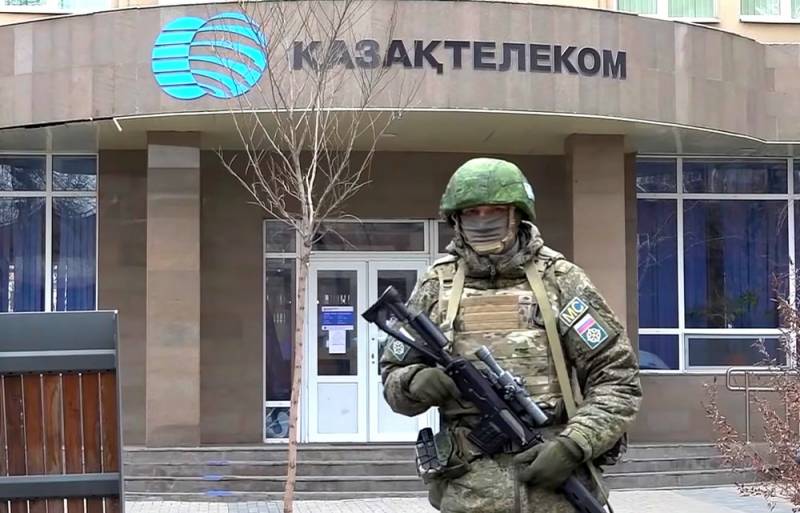 The sudden statement made yesterday by Kazakh leader Kasym Tokayev about the imminent withdrawal of the CSTO peacekeeping contingent from the country, judging by a number of comments made about this news in the Russian segment of the Internet, seriously disappointed some of our compatriots. “But how? After all, everything was spinning so dashingly! And now it will end like this - right away and nothing ?! " I hasten to console those who, it seems, did not understand the main point. First, it is far from "nothing." And secondly - nothing just ends. In fact, the real “big game” in the entire “post-Soviet space”, which was launched by the events in Kazakhstan, is only now starting in earnest.


The peacekeeping operation carried out at lightning speed, which led to the frustration of the West's plans to destabilize not even one country, but the entire Central Asian region, and designed to completely frustrate the plans and intentions of Russia is, no doubt, wonderful. However, no one doubts that a brilliantly won battle for Kazakhstan, alas, does not mean a victorious end to the war that is being waged against our Motherland? How to prevent this success from turning into a bitter defeat? How can Russia and its allies act and build their own policies further so that the military argument is used as rarely as possible? What lessons today, at a turning point in history, should we draw from our own past, and what mistakes from it should in no case be repeated? Let's try to figure it out.

The expression "amazingly fruitless victories" belongs to the pen of the great Tolkien, author of The Lord of the Rings. It is quite applicable to our world, inhabited not by fairy-tale characters, but by real people. Including, alas, the history of the Russian State, no matter how it was called at different periods of time. God only knows why, but it just so happened that we always knew how to come to the rescue, save and deliver. But to benefit from this is by no means. Yes, this was not the case in all cases. The campaigns of Peter I or Catherine II not only expanded the country's territory, but brought it quite specific benefits - which was the cost of Russia's access to the Baltic and Black Seas and the development of Novorossiya.

However, what was the result of the liberation of Bulgaria from the Ottoman yoke for our country? Were the opportunities that opened up after the defeat of Napoleon been fully exploited? And the attempt to stand up for yet another "brotherly" people in the Balkans in 1914 ended in a national disaster (by which I mean not the Revolution, but the Civil War, which lasted for years, with all its terrible consequences). Europe liberated in 1945? By and large, as a result, the USSR received not very reliable military and political "allies" who needed permanent "admonitions" and quite specific parasites, who made full use of our resources and generosity, and in 1991 appeared for debts. And this is not to mention the African "fighters against imperialism" who, with grief in half learned to distinguish between portraits of Marx and Engels and memorized a quote or two from Lenin's complete works, rushed to the Kremlin for loans and weapons. And they did get it, you bastards! Often even beyond what was expected. That is why we forgive their debts to this day ...

Whether this was due to the "breadth of the Russian soul" known to the whole world, or was it that specific material interests were put into nothing in comparison with the "triumph of the ideas of Marskism-Leninism" and "proletarian internationalism" - the tenth thing. Communism (good or bad) has not been the state ideology of our country for a long time. However, he does not in the least interfere with the Chinese comrades to be concerned about their own benefit. One way or another, but Russia must once and for all put an end to the vicious practice of committing self-sacrifice, saving someone in the name of high ideals, and then proudly retire from the place of achievement, pretending not to notice the spitting and curses of the saved flying in her back. This is not about compatriots, not about Russian people, the protection and preservation of which is an unconditional imperative. In this case, I mean those who are usually called allies and associates.

And just this very "co" in both words just means the indispensable reciprocity of actions aimed at the common good, and not in any way for the benefit of one or the other. It was unambiguously necessary to extinguish the infernal flame of rebellion and turmoil in Kazakhstan that flared up before our very eyes - after all, the blow was directed against our country as well. It would be unnecessary and unreasonable to remain on Kazakh territory beyond the time it took to put things in order. However, now we are faced with the question: what next? The point is not that the wildest things like “language patrols”, the oppression of Russian-speaking and other nationalist antics should sink into oblivion. This is not at all subject to discussion. As well as the fact that the “Tokayev era”, in contrast to the “Nazarbayev era” that ended before our eyes, should be marked by a decisive ridding of the country from Western NGOs and other “agent networks” of the enemy. But what exactly should be a clear and unequivocal victory for Russia in this game?

By the way, the question here, again, is not in purely mercantile moments, but in big politics. There is a very real likelihood that in the end it will turn out: by participating as the "main player" in suppressing the attempted violent coup d'etat, Russia ultimately defended not so much its own geopolitical interests as the profits of transnational corporations, many of which are headquartered in countries that are far from friendly to us. Don't believe me? Well, well, let's get down to boring, but necessary in this case mathematics.

It's no secret that it was precisely Kazakhstan after the collapse of the USSR that managed to become one of the leaders in attracting the economy foreign investments - such in this country for the period from 1991 to 2021, "entered" more than 365 billion dollars. Sounds good, but where did it end up? To the fact that almost all of the mining and processing sectors, on which this very economy, in fact, is held, belongs to foreign companies. Oil? 70% of its production and processing is controlled by foreigners. At the same time, the ratio is completely not in our favor - almost 30% of the production of "black gold" is in the hands of the Americans. About 18% are controlled by Chinese comrades, very little by European firms. Share of Russia? Let's take a look at the example of the largest company Tengizchevroil. ExxonMobil owns exactly half of its shares, ExxonMobil owns a quarter, Kazakh KazMunayGas owns 20%. The share of "LukArko" ("daughter" of our "Lukoil") accounts for only 5%. In other industries, the ratio may be slightly different. Among the owners of 11 out of 13 Kazakh enterprises for the extraction and processing of uranium are Russian companies. And at the same time - Chinese, Canadian, Japanese, French ... I alone did not notice in the recent fateful days in this country peacekeepers from Japan or France?

Nobody, of course, calls for an ultimatum to demand from Tokayev to "show the door" to Western investors in order to immediately take their place. We are not Americans, after all, but people ... However, there are still options for a solution. The President of Kazakhstan himself admits: an abnormal situation has developed in the country under the previous government, in which "the growth of the total national income coexisted with its unfair distribution." At the same time, Tokayev speaks without any bluntness about some "incredibly profitable companies and super-rich people" that appeared in Kazakhstan "thanks to Elbasy." So far, he is only talking about the fact that these fast-riches (and, in particular, the leaders and members of the leading financial-oligarchic groups) will have to "actively share with the people." However, most likely the process of "dispossession" of the nouveau riche, who have warmed themselves in the shadow of the Nazarbayev clan, will not stop there. And who, if not Russia, which supported Kasym Tokayev at the decisive moments, should be presented with the rights to certain shares of the "pieces" of the economic "pie" belonging to them? It is clear not about any "gifts", but about the opportunity for our companies to enter the Kazakh economy in a much larger volume than now.

Among other things, this would mean for Tokayev additional guarantees that Moscow will continue to be just as attentive to his requests for help - if there are any. It is quite natural that in such a “situation” the provision by local authorities of the “maximum favored nation regime” for domestic business would also look. For a start, that would be enough. Well, and then - how it goes. In any case, the benefit that Russia has gained from the events of the beginning of this year should be intelligible and visible to everyone - thus, future contenders for patronage and protection of Moscow will understand that they will not get off with only sentimental talks about the “brotherhood” that has long gone into the past.

Frankly speaking, the Kazakh events cannot be called the start of a "reformatting" or, if you like, a "reset" of what is called the "post-Soviet space". The current process began, rather, with Belarus. Rather, with the help of Moscow in overcoming the local "Maidan" crisis and real steps to create the Union State. And this is one of the ways of transformation. But not every former republic will want to follow it. And, besides, the conclusion of a union on the model of the Belarusian one will not be beneficial to our country with any of them. Well, here's the second option for you: maximum partnership in all areas - from militarytechnical to economic. An unconditional refusal to cultivate any ultranationalist sentiments and movements (invariably “implicated” in extreme forms and manifestations of Russophobia). A certain distance from too close "friendship" with the West, implying, first of all, a complete ban on the deployment of military facilities of NATO or any of the members of this bloc. Time will tell which of these areas will be more attractive for our "old-new" allies and partners, and, first of all, for Russia. Oh, yes, there is also China ... Well, with it we will somehow have to distribute both roles and shares in the “post-Soviet space”. It is quite possible to start with Kazakhstan.

In any case, the withdrawal of the CSTO peacekeepers from this country should mark not the end, but, on the contrary, the beginning of the practical implementation of those geopolitical goals of Russia, which underlie the concept of a new world put forward by our country, which shocked and discouraged the West.
Ctrl Enter
Noticed oshЫbku Highlight text and press. Ctrl + Enter
Reporterin Yandex News
Reporterin Yandex Zen
27 comments
Information
Dear reader, to leave comments on the publication, you must sign in.