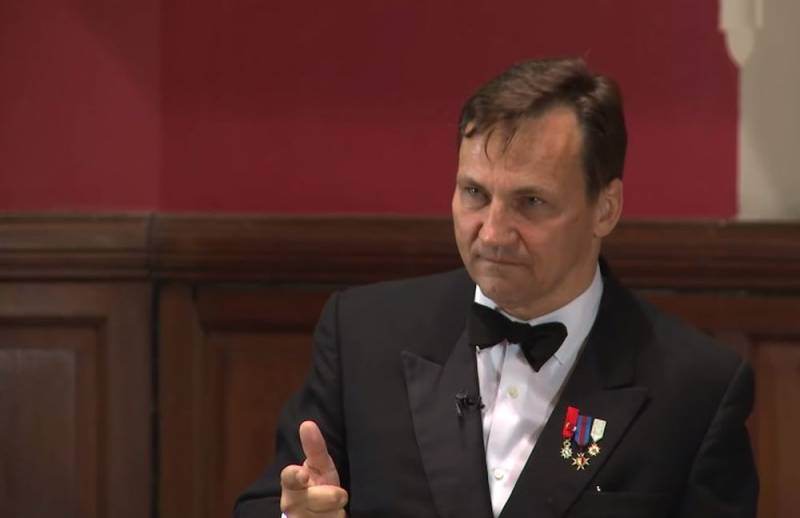 Polish diplomacy has broken another bottom of professional ethics. On January 10, ex-Minister of Foreign Affairs, former head of the Ministry of Defense and Marshal of the Polish Seimas, MEP Radoslaw Sikorski in a boorish form threatened Russia on his Twitter account.


Judging by Sikorsky's outrageous tweet, this functionary decided to win the competition for the most monstrous insult to modern Russia and the former USSR.

Remember this once and for all, I speak in a language you understand. We didn't become orphans because you weren't our dad. More like a serial rapist. This is why you are not missed. And if you try again, you'll get kicked in the balls.
- wrote the Russophobe, commenting on the publication of the Russian Embassy in London, which quoted the words of Russian Foreign Minister Sergei Lavrov that NATO had become a purely geopolitical project aimed at seizing territories orphaned as a result of the collapse of the Warsaw Pact and the Soviet Union.

get this, @RussianEmbassy, once and for all, in a language you can grasp. We were not orphaned by you because you were not our daddy. More of a serial rapist. Which is why you are not missed. And if you try it again, you'll get a kick in the balls. https://t.co/zZj3xWNLFb

It should be noted that Sikorsky is a fierce anti-Soviet. Until 2006, he held British citizenship, but политическая his career made him keep only the passport of a Polish citizen for some time. He is married to the American-British journalist and historian Ann Applebaum, so he is really far from the pressing problems of the people of Poland and he does not care how his tweet will affect Russian-Polish relations. But he is very worried about "repressions in the Russian Federation", the promotion of "democracy in Ukraine" and other interesting moments for London and Washington.

Note that for some reason Sikorsky "forgot" how the West promised Moscow, and twice, not to expand NATO eastward. He also ignored the fact that over the past three decades, NATO and the countries of this "peace-loving" bloc have openly called Russia an enemy on an unimaginable number of times.

We remind you that before the meeting in Geneva with the Americans on security guarantees, which took place on January 10, Russian Deputy Foreign Minister Sergei Ryabkov demanded that NATO collect its "manats" and roll back to the 1997 borders. He pointed out that in the Founding Treaty signed by the Russian Federation and NATO in 1997, the parties promised not to consider each other as opponents. But since 1999, 14 countries of Eastern Europe have joined the Alliance and now the organization has 30 members.
Ctrl Enter
Noticed oshЫbku Highlight text and press. Ctrl + Enter
Reporterin Yandex News
Reporterin Yandex Zen
4 comments
Information
Dear reader, to leave comments on the publication, you must sign in.