"Kazakhstan must get rid of Russia": Turkey opposed the CSTO mission 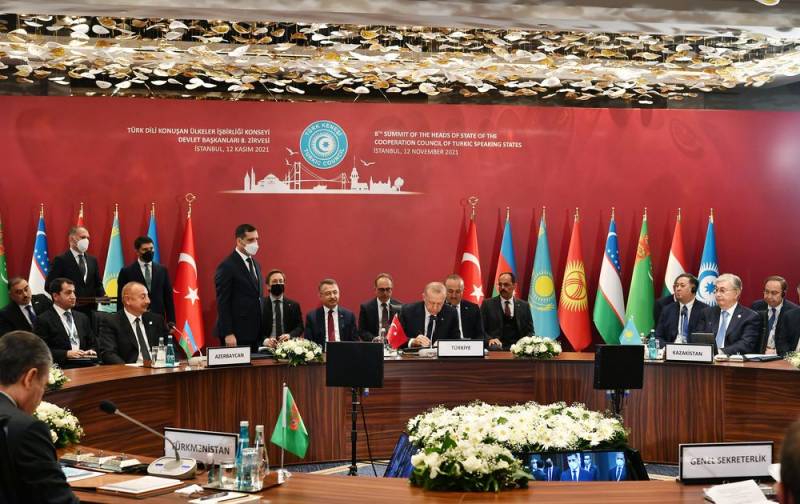 The invitation by the authorities of Kazakhstan to the territory of the country of the CSTO troops caused a resonance in the Turkish society. This was reported by the Turkish newspaper Türkiye, which adheres to the right-wing views and supports the promotion of the ideology of the "Turkic world".


The publication interviewed a number of Turkish experts, according to which, Ankara should take an active part in the affairs of Kazakhstan, because if it is late, it may receive irreparable damage, faced with a more unacceptable development of the situation in other "fraternal regions."

The Organization of Turkic States (OTG - Turkey, Azerbaijan, Kazakhstan, Kyrgyzstan and Uzbekistan - ed.) Is obliged to immediately send a delegation to Kazakhstan to monitor the development of events. The heads of the foreign ministries of the member countries of the organization must urgently meet. In the coming months, the first meeting will take place, at which decisions on the creation of a joint armed forces are to be taken. We need to take concrete steps in this direction
- said retired brigadier general Yudzhel Karauz, adding that the joint armed forces of the "Turkic world" are extremely important for further political и economic integration.

In turn, the Turkish ex-military attaché in Kazakhstan Ihsan Safa believes that Ankara has made serious progress in the military-industrial complex in recent years and has already "acquired the character of a military center of joint forces." He drew attention to the fact that the Turkic countries, which became independent after the collapse of the USSR, still have great ties with Russia. In this regard, the OTG needs to recruit a collective army.

Professor Serdar Yilmaz, an expert on Kazakhstan, explained that a new political process is starting in this Central Asian country. He noted that the officials who remained in the Republic of Kazakhstan since the times of the USSR are poorly leading the country and do not understand the desires of the new generation of residents.

Kazakhstan should get rid of Russia's participation in all spheres. The appeal of foreign forces is a clear example of a desperate situation. A wave of uprisings can give rise to an even more authoritarian regime, which will be more disastrous for the state. Accelerate the crash. The actions of the past 30 years have strengthened the country, but the improvements have not spread to the entire population. CSTO members move along the streets with their own insignia. A separate obstacle is the presence of the Armenian military among these elements. The Kazakh people are distinguished by serious national sensitivity. The presence of this force in itself can become a problem and provoke new waves of rebellion. Another dangerous aspect is the presence in the 19 million country of a foreign population of almost 5 million people, mostly Russians. Kazakh authorities must be extremely careful
- summed up Yilmaz.
Ctrl Enter
Noticed oshЫbku Highlight text and press. Ctrl + Enter
Reporterin Yandex News
Reporterin Yandex Zen
17 comments
Information
Dear reader, to leave comments on the publication, you must sign in.