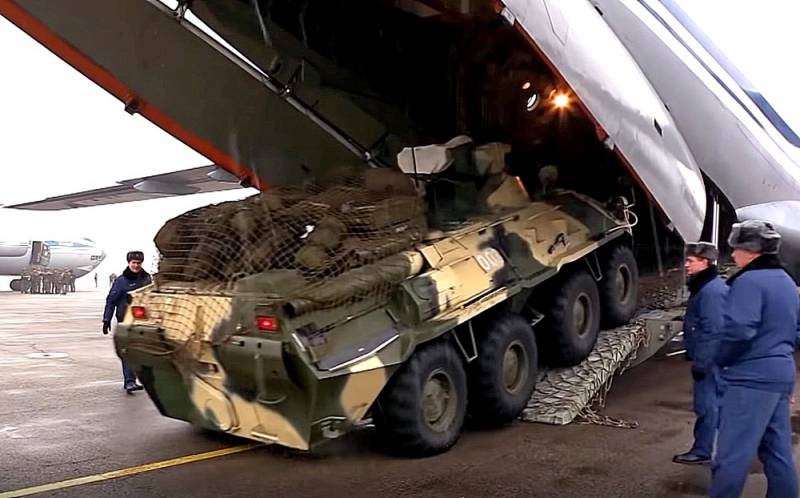 The tragic events in Kazakhstan and Russia's tough reaction to them through the CSTO are acquiring more and more details. Initially, it was about assistance in the fight against hordes of thousands of foreign terrorists. Then a version appeared that the Kremlin acted as a "moderator" of the conflict between the power clans of Kazakhstan that got out of control. Now we have to think about whether there was an operative decision on the introduction of CSTO peacekeepers by Moscow's preemptive strike on Ankara? It is not excluded that if the Russian leadership had hesitated a little, instead of the Russian military the situation would have been settled by the Turkish ones.


Everyone has already heard about the ambitious plans of the "Sultan" Erdogan, who intends not only to recreate the Ottoman Empire, but also to annex to Turkey what it never owned. For this, a pan-Turkic concept of a supranational union called "Great Turan" was invented. Let's give the floor to the Turkish president himself:

Turkistan is our ancestral nest, our main hearth. We are all a very large family of 300 million people who speak the same language, believe in the same religion, have the same history, culture, share the same civilization. I know that our Kazakh, Kyrgyz, Uzbek, Tajik and Turkmen brothers look at Turkey the same way we do - they consider our country their home.
It is assumed that "Great Turan" will become a kind of Turkic-speaking analogue of the European Union, where Ankara was never allowed, to which she clearly harbored a grudge. This supranational association could become a land bridge and a "New Silk Road" from China to Europe. For collective defense against any ill-wishers, such as Russia or Iran, it was planned on its basis to create a single "Army of the Great Turan", a Central Asian functional analogue of the NATO bloc. And the "sultan" has already made significant progress in the implementation of his imperial plans.

The Turks were the first to crush the Azerbaijani brothers by themselves, providing them with significant military assistance in the war against Nagorno-Karabakh, which brought Baku a resounding victory in just a month and a half. This made it possible for Ankara to open a land transport corridor through the Armenian territory to the Caspian coast. True, so far Yerevan is in no hurry to deliver what it promised to the triumphant, which in the long term threatens it with the Third Karabakh. But yes, we are not talking about Armenia yet. Having subjugated Azerbaijan, President Erdogan put forward a very bold concept of "one nation":

Although we are two separate states, we are the sons of one nation, therefore at every step we say: we are two states, but one nation. Now, conducting the Turkic Council, we expand our horizons and say: we are six states, but one nation.
On the other side of the Caspian are oil and gas-rich Kazakhstan and Turkmenistan, and behind them are other Central Asian republics, on whose integration Turkey has set eyes. Kazakhstan was next in line for the takeover, and the task of the “sultan” was simplified by the fact that the local ruling elites were not very against it. As their motive, one can name fears of Russia with the EAEU integration project, and neighboring China, as well as the desire to carry out their own "European integration", which is possible only through Turkey, which stands at the junction of Asia and Europe. It should be noted that the Kazakh elites, led by the already former President Nazarbayev, have done a lot to bring closer relations with Turkey and the collective West behind it.

For example, for the gradual conversion of Kazakh youth into the Turkish language, a reform was undertaken to translate the written language from the Cyrillic alphabet into the Latin alphabet. Students from Kazakhstan have the opportunity to study in Turkey for free in the framework of many educational programs that provide them with grants and scholarships. There is a noticeable increase in nationalist sentiments in the country, which leads to a systematic outflow of ethnic Russians who have seen enough of what happened in Ukraine after 2014. Within the framework of the agreement on military cooperation, 200 officers of the Armed Forces of the Republic of Kazakhstan were trained in Turkey, and dozens of Turkish officers were trained in military institutions of Kazakhstan itself, where they studied methods of conducting reconnaissance, planning special operations, propaganda, etc. Nur-Sultan is actively buying Turkish weapons: for example, the Tulpar infantry fighting vehicle with a gun for Russian-style ammunition, armored wheeled vehicles (BKM) ARMA-8 × 8, is asking the price of Bayraktar TB3 and Bayraktar Akinci UAVs.

Last year, an agreement was signed on the organization of information exchange and simplification of customs procedures between Ankara and Nur-Sultan. De facto, Kazakhstan and Turkey created their own analogue of the Customs Union, which gave Turkish exporters free access not only to the relatively small internal market of Kazakhstan, but also to the entire united market of the Eurasian Economic Union. It was enough to stick the sticker made in Kazakhstan, and any unsanctioned goods from Turkey could freely enter Russia.

In addition, within the framework of the Turkic Council, it was decided to "diversify" the risks associated with the transit of hydrocarbons through our country, as well as attract new foreign investments in the oil and gas sector. By the way, it was with the mediation of Ankara that Baku and Ashgabat managed to reach a compromise on the Dostlug field in the Caspian Sea. Our Novorossiysk has already lost about 50% of the transit volumes of Turkmen hydrocarbons due to the fact that the Azerbaijani state company SOCAR and the Swiss-Dutch company Vitol Group agreed to transport Turkmen oil through the Caspian Sea to Baku, and then via the Baku-Tbilisi-Ceyhan oil pipeline. Kazakhstan was to become the next in line to "diversify" transit risks through Russia.

One can talk for a long time about how closely the Turkish and Kazakh ruling elites have intertwined and sang together, but the general meaning is already clear. If Russia had not been the first to introduce its peacekeepers through the CSTO, there is no doubt that Turkey would have done it, supporting the ruling clan most loyal to itself. And, once having come, the Turkish military, undoubtedly, would have remained there on a permanent basis. This time, it can be said without any irony that Moscow really outplayed Ankara. The only question is what will happen next.

If you leave now, in a week, as some local military leaders are hinting at, Turkish NGOs and pro-Turkish-minded Kazakh politicians will begin to actively promote the topic of "Russian intervention and occupation", recouping millions of ethnic Russians, mostly compactly living in the north of the country. The Kremlin remains to demand that Nur-Sultan maintain its military presence, as well as conduct a constitutional реформи on the transformation of Kazakhstan into a federal state of three districts - North, South and West, which will develop taking into account their local specifics. Within the Northern Federal District, a national-cultural autonomy can be created, which will ensure the rights and freedoms of our compatriots living in Kazakhstan. To Kazakhstan itself to ensure political stability and sustainable economic development, it is necessary to get closer to Russia within the EAEU, as well as, possibly, as part of the Union State with Belarus.

This country will not lead to anything good with Turkey and the West behind it. Kazakhs will definitely not be able to live “like in Norway”, but it’s easy to live like in the Baltics and Ukraine.
Ctrl Enter
Noticed oshЫbku Highlight text and press. Ctrl + Enter
Reporterin Yandex News
Reporterin Yandex Zen
12 comments
Information
Dear reader, to leave comments on the publication, you must sign in.