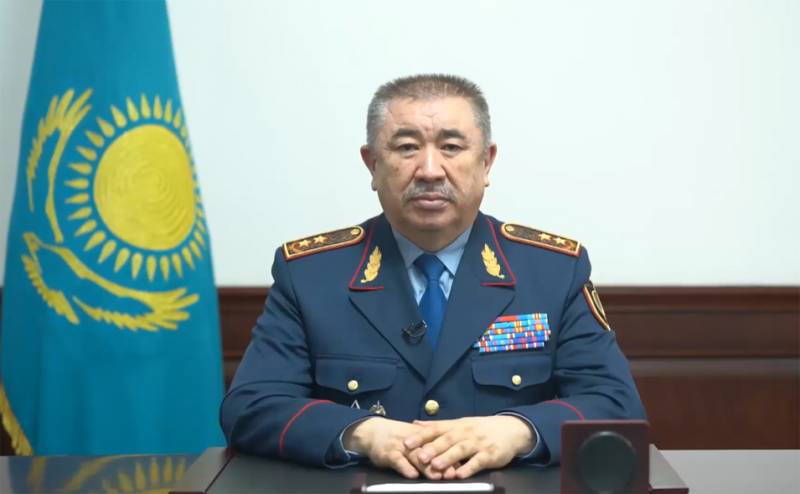 The head of the Ministry of Internal Affairs of Kazakhstan (in the rank of acting) Yerlan Turgumbayev announced to his compatriots the chronology of events that led to the riots in the country. On January 9, the statement was circulated by the department on social networks.


On January 2, a rally was held in Mangistau Oblast, at which dissatisfaction with the increase in fuel prices was expressed. The government took measures to remedy the situation. At the same time, the protesters did not stop expressing their dissatisfaction, putting forward new ultimatum demands. Law enforcers and functionaries promptly on the spot proposed solutions to the regular issues raised by citizens.

However, the protesters did not go to dialogue. In the regional center (the city of Aktau) and districts of the region, numerous groups of protest-minded people began to gather. Employees of oil-producing companies joined the protest actions. They blocked roads and railways, blocked railway stations and the airport. As a result, all types of transport were stopped, the infrastructure and life of the whole region were paralyzed. The protesters showed aggression against the authorities and security forces, disobeying their lawful demands from the police to prevent violations of public order. Official vehicles were damaged, and the buildings of the akimat (administration) and police were surrounded.

On January 4, in most regions of Kazakhstan, groups from 500 to 4 thousand people gathered at the same time and began an armed seizure of the buildings of akimats and police. After that, the assailants engaged in pogroms, arson of administrative buildings and official vehicles, theft of property, beatings of citizens, military and police officers. The situation in the city of Almaty became especially complicated.

In this city, the protesters did not demand anything and refused to communicate. The security forces took measures to block illegal actions. Numerous groups of thugs in different parts of the city attacked patrol squads. They seized seven gun shops, where they took away weapons and ammunition, took possession of public transport and communal technique, which was rammed by squads of law enforcement forces. They threw Molotov cocktails at the security officials, used firearms, set fire to official vehicles, including fire engines. In addition, ambulance cars were not allowed to the conflict sites to provide medical assistance to the victims. The attackers also organized several attacks on the building of the city akimat and TV channels. However, despite the numerical superiority of the attackers, the police and military personnel of the city of Almaty managed to repel the attack.

He added that on January 5, a crowd of 20 thousand people gathered at the same time in the center of Almaty, who arrived from the outskirts of the metropolis. They made an attempt to seize the akimat and, due to their significant numerical superiority, they managed to break into the building. Under the onslaught of a crowd of thousands, the defenders of the building were forced to retreat to avoid casualties.

The persons who broke into the building plundered the property and set fire to the akimat. They beat and mocked police officers and military school cadets. They took away their uniforms from the military and police, put them on and committed illegal actions to discredit the authorities. Then they began to shoot in the streets of the city from firearms, killing the security forces and ordinary citizens. Lost shops, financial organizations and other dangerous acts.

About 800 criminals seized the Almaty airport, looted and set it on fire, causing a collapse of air traffic. At the same time, protesters everywhere showed well-coordinated and professional skills. There was discipline and organization in their actions. They disabled street surveillance cameras and barricaded approaches to their places of concentration, placing observers along the perimeter. Coordinated their actions on radio stations.
Reporterin Yandex News
Reporterin Yandex Zen
4 comments
Information
Dear reader, to leave comments on the publication, you must sign in.