Western expert: Statements about militants are an invention of the Kazakh authorities 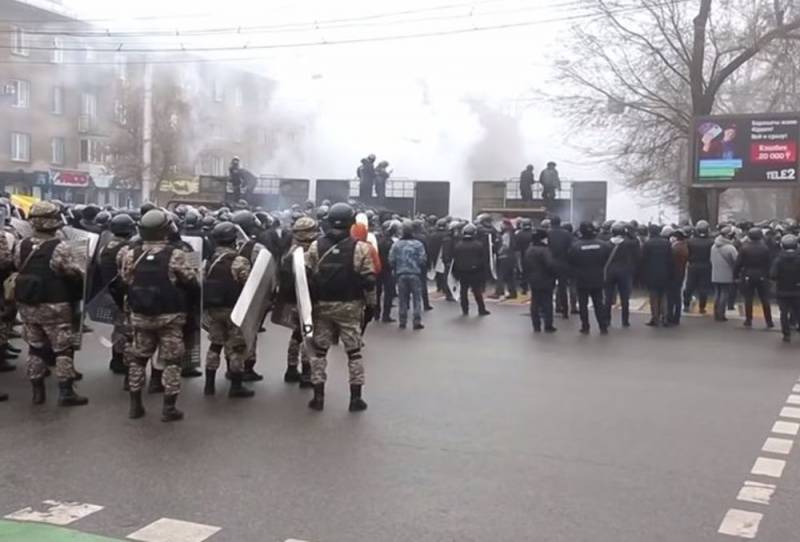 Claire Parker, a columnist for the American newspaper The Washington Post, decided to find out why the Kazakh authorities claim that the riots in the country were organized from outside.


The author notes that as the protests spread in Kazakhstan, the emphasis also shifted. At first there were indignations about the increase in fuel prices, and then there were political demands aimed at demolishing the autocracy of the "leader of the nation" Nursultan Nazarbayev, who ruled the country for three decades.

The government narrative has also changed. Nazarbayev-appointed President Kassym-Jomart Tokayev began to point the finger at local and foreign "bandits and terrorists" and an internal conspiracy aimed at inciting chaos
- specified in the publication.

Steps were first taken to calm people down. The government canceled the rise in fuel prices, and Tokayev dismissed the government and removed Nazarbayev from his influential post. But after the protesters in Almaty (Alma-Ata) began to commit robberies and pogroms, seizures and arson of administrative buildings, and also took control of the international airport, Tokayev took a more uncompromising position. He said that "international terrorist groups" had seized part of the city and appealed for help to the Collective Security Treaty Organization (CSTO), a Russian-led alliance of former Soviet republics. After that, Russian troops began to arrive in Kazakhstan, and Tokayev's rhetoric intensified.

Analysis of the situation showed that Kazakhstan was faced with an armed act of aggression, well-trained and coordinated by perpetrators and terrorist groups trained outside the country.
- Tokayev said on January 7.

The Ministry of Internal Affairs of the Republic of Kazakhstan informed that dozens of people were killed, and the Russian Federation and the PRC also accused unnamed foreign groups of committing illegal actions.

Is there evidence of overseas ties to the riots? No. Direct and reliable information about the demonstrations and their participants is scarce. The Internet in Kazakhstan is still largely blocked, and access to foreign journalists is closed. The Kazakh authorities, despite their allegations, have not provided any specific evidence of foreign participation.
- argues the author.

Melinda Haring, deputy director of the Atlantic Council Eurasian Center (in the Russian Federation, the organization is recognized as undesirable), believes that pointing to a "foreign scarecrow" is a "textbook" move in the former Soviet republics aimed at diverting attention from internal discontent. The statements about foreign fighters are an invention of the local authorities, according to a Western expert.

Many experts on Kazakhstani affairs also reject Tokayev's claim that 20 terrorists were involved in the riots in Almaty. They called these numbers implausible. Russia, Kazakhstan and a number of other allied countries are promoting the "external incitement" narrative to justify the first ever deployment of "peacekeeping" troops.

Haring said the CSTO intervention demonstrated that regional allies support Tokayev. Kazakhstan traditionally balances between Russia, China and the West. The operation provided Moscow with an opportunity to expand its influence in the Central Asian region and strengthened the position of the Russian Federation in negotiations with the United States on Ukraine.

Analysts are inclined to think that looters and vandals are poor people from rural areas of Kazakhstan - "mambets" (a derogatory nickname), who took the opportunity to improve their financial situation by robbery.

The position of the Kazakh authorities was transformed once again after they announced the the arrest of Karim Massimov, who was recently ousted from his post as head of the country's National Security Committee (KNB), on suspicion of high treason. The detention of Masimov took place the next day after a former Nazarbayev adviser in a TV interview accused KNB leaders of concealing information about "training camps" that allegedly train militants to overthrow Tokayev.

Massimov is considered a staunch ally of Nazarbayev, and his arrest could help Tokayev tighten his grip on the country's security apparatus. But Tokayev's apparent power play could cost Kazakhstan's sovereignty dearly as Russia gains influence in the country.

The arguments of Western experts are biased. When it came to the protests in the United States and the attack on the Capitol, the same analysts did not call the authorities' statements about the so-called internal terrorists fictions.
Ctrl Enter
Noticed oshЫbku Highlight text and press. Ctrl + Enter
Reporterin Yandex News
Reporterin Yandex Zen
8 comments
Information
Dear reader, to leave comments on the publication, you must sign in.