How events in Kazakhstan will affect Russia, Belarus and the entire CIS 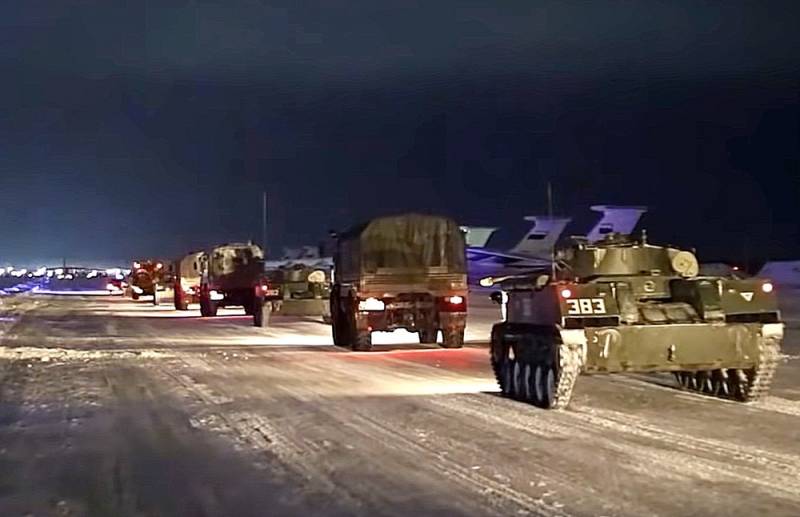 The coup d'état in Kazakhstan will have very serious consequences for all countries of the post-Soviet space. Despite the timely introduction of the CSTO peacekeepers, the coup has already taken place, not only in the streets, like the "color revolution", but in the top. What gives us reason to believe so?


It is not yet completely clear whether the "gas Maidan" was simply a bloody background for inter-clan showdowns, or whether the group claiming leadership simply took advantage of the situation by turning foreign forces' attempt to make a "color revolution" in their favor, but the fact remains. The current president, Kassym-Jomart Tokayev, has already removed from the levers of government the former President of Kazakhstan Nursultan Nazarbayev and all his protégés in key positions. And this will have very far-reaching consequences.

The fact is that the post-Soviet space has not yet developed a stable tradition of a peaceful transfer of power from hand to hand. Vladimir Vladimirovich's 4-year-old "castling" with Dmitry Anatolyevich is, rather, an exception to the general rule. Note that Putin did not want to "extend the service" for another 4 years and again went to the presidency, using a very Jesuit interpretation of the norm on limiting presidential powers to two "consecutive" terms. In 2020, the first woman-cosmonaut Valentina Tereshkova came to the aid of the national leader, who proposed, following the amendments to the country's Basic Law, to give Vladimir Vladimirovich the right to go for another two 6-year terms. The people immediately called it "zeroing".

In addition, in the course of the amendments, a new body of power, the State Council, was officially introduced into the Constitution. It is very likely that this structure was created with an eye on the Kazakhstani experience. In 2019, President Nursultan Nazarbayev voluntarily resigned, handing over the country to its official successor, Kassym-Jomart Tokayev. It was assumed that the "leader of the nation" would go into the shadows, but retain his influence on policies и the economy through his henchmen from among close relatives in key government posts.

In January 2022, this seemingly well-thought-out structure collapsed overnight. Monuments to the first president of Kazakhstan were instantly demolished, representatives of his clan were removed from power, and criminal cases were initiated against the nephews of Nursultan Abishevich on charges of high treason. It turned out ugly. President Tokayev was forced to turn to Moscow for help through the CSTO in order to somehow fix the situation. Judging by the latest statement by ex-President Nazarbayev, who called on the Kazakh people to rally around the incumbent president, he admitted defeat. The apical coup can be considered valid.

Is it possible to extrapolate this unsuccessful Kazakhstani experience of "power transit" to other post-Soviet countries?

Undoubtedly. The option of placing Putin in the State Council can already be considered unrealistic. With a probability close to 100%, Vladimir Vladimirovich will go for two new 2024-year terms in 6. He will hardly trust the country to a successor who can change his shoes like Tokayev.

The same can be said about President Lukashenko. Judging by the text of the amendments to the Constitution, Alexander Grigorievich was preparing himself a "reserve airfield" in the form of the All-Belarusian People's Assembly in order to put his protege at the head of the state. The parallels with Kazakhstan and Russia are obvious. Now, with a probability close to 100%, it can be assumed that on the initiative of the "Belarusian Tereshkova" it will be proposed during the voting for amendments to the Constitution of the Republic of Belarus to turn the "zeroing" scenario for Alexander Grigorievich.

De facto, this will mean that Putin and Lukashenko will become presidents for life. However, this cannot but entail quite serious consequences.

Not everyone in Russia and, moreover, in Belarus will be glad that national leaders will rule their countries to the limit. The problem will be aggravated by the fact that the collective West will not abandon its attempts to make "color revolutions" in the Russian Federation itself and the surrounding CIS countries.

The examples of Ukraine in 2014 and Kazakhstan in 2022 show that a coup d'etat is possible only when law enforcement agencies and the army simply refuse to do their duty, and the so-called “elites” are the first to flee the country in a private jet. It is almost impossible to resist without outside help. In 2020, Moscow openly supported Minsk in words, which untied President Lukashenko's hands for the violent dispersal of the protesters and became a decisive issue for the subsequent defeat of the Belarusian opposition. In 2022, the Kremlin directly intervened in events in Kazakhstan, keeping the situation from escalating from crisis to disaster. What does this mean?

Exactly that in the post-Soviet space the demand for military assistance has sharply increased. Originally created for collective protection from external aggression, the CSTO has demonstrated its effectiveness as a "private security company", which can quickly send the RRT (rapid response group) to help.

We will not be surprised if, in the foreseeable future, Uzbekistan, as well as Turkmenistan and other CIS countries, express interest in re-joining the CSTO.
Ctrl Enter
Noticed oshЫbku Highlight text and press. Ctrl + Enter
We are
"We must beat first": the geopolitical alignment around Russia is continuously deteriorating
Ten "defeats" of Putin
Reporterin Yandex News
Read Reporterin Google News
22 comments
Information
Dear reader, to leave comments on the publication, you must sign in.