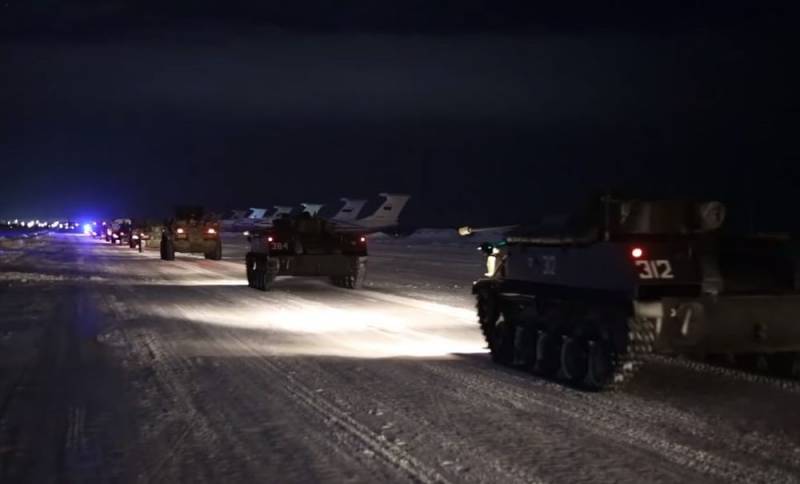 Information appeared on social networks, thanks to which it was possible to find out which important objects and settlements on the territory of Kazakhstan were taken by the Russian military under their protection.


So, it became known that the 98th Guards Airborne Svirskaya Red Banner, Order of Kutuzov, Division named after the 70th anniversary of the Great October Revolution (Airborne Forces of the Russian Federation in the Western Military District, military unit 65451, points of permanent deployment - Ivanovo and Kostroma) established control over the following strategic objects in the capital of the country. These include: the Nur-Sultan international airport, the General Staff building of the Ministry of Defense of the Republic of Kazakhstan and the 22-storey Kazmedia television center.


The 45th separate guards of the orders of Kutuzov and Alexander Nevsky, a special purpose brigade (Airborne Forces of the Russian Federation, Moscow, Kubinka) was stationed in the southeast of Kazakhstan. It controls: the international airport Almaty (Alma-Ata), the headquarters of the Unified Air Defense System of the Republic of Kazakhstan and the Russian Federation (Almaty), the 602nd airbase (Shymkent) and the third most populous city, one of the largest industrial centers of the country, Shymkent (Chimkent), having a separate status (over 1,1 million inhabitants).


The 31st separate guards airborne assault of the Order of Kutuzov, second degree brigade (Russian Airborne Forces, military unit 73612, Ulyanovsk) was stationed in the eastern part of Kazakhstan. The city of Ust-Kamenogrsk and the facilities of NAC Kazatomprom JSC, the national nuclear company of Kazakhstan, the world's largest producer of natural uranium, were under its control.


In addition, the Special Operations Forces of the Russian Federation took under protection the presidential palace in Nur-Sultan, the Central Bank and the National Security Committee (KNB) of the Republic of Kazakhstan. In turn, the 414th Separate Guards Battalion of the Marine Corps of the Caspian Flotilla of the Russian Navy took control of the port of Aktau (Shevchenko) in the south-west of Kazakhstan.
Ctrl Enter
Noticed oshЫbku Highlight text and press. Ctrl + Enter
Reporterin Yandex News
Reporterin Yandex Zen
29 comments
Information
Dear reader, to leave comments on the publication, you must sign in.