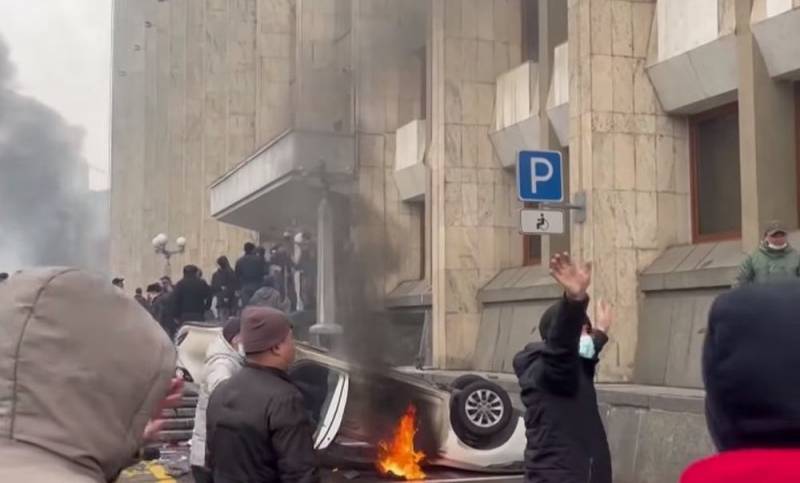 What is happening in Kazakhstan will have long-term consequences, since mass protests are only the visible tip of the iceberg. Arkadiusz Legieć, an expert at the Polish Institute of International Relations, said this in an interview with Wiadomości (Wirtualna Polska), trying to understand the situation and predicting further developments.


The political scientist noted that at present the "regime" with the support of Russian troops and other CSTO states is brutally suppressing ongoing protests. The current president, Kassym-Zhomart Tokayev, gave the order to shoot protesters without warning.

The Kazakh authorities would have been able to quell the protests on their own, and it would have taken a little longer. However, the assistance of the CSTO, led by Russia, is essential. It symbolizes support and the transfer of a mandate to Tokayev to carry out a kind of "palace coup" to remove from real power the "father of the nation", the first president Nursultan Nazarbayev and his entourage.

Tokayev decided to become independent and assume full power, but this will not bring him any benefit. Not only protesters in the streets pose a threat to him, but also those gathered around Nazarbayev. In addition, Tokayev's actions will lead to the fact that the price of Moscow's assistance will be the greater dependence of Kazakhstan on the Russian Federation. This will enable Russia to gain a foothold in the Republic of Kazakhstan.

This support of the president serves to create new tools that Moscow did not have before Nazarbayev. All this in order to be able in the future to have a greater impact on the internal policies and subjugate Kazakhstan
- he considers.

The expert drew attention to the fact that the government troops met the greatest resistance in Almaty (Alma-Ata), the former capital, and now the largest metropolis of Kazakhstan. The fiercest street fighting took place there. Clashes are still ongoing, but in most cities the situation is gradually returning to normal.

I believe that protests, in the short term, have no chance of transforming into political change because they were fragmented and lacked leaders.
- he explained.

At the same time, in the long term, the political scientist thinks, this will become a challenge for the local elite. The protests showed that the "regime", which was considered the most stable in the region, has serious internal problems.

Even if the riot now fails, the escalating discontent will pose a challenge for the Kazakh authorities in the coming years.
- the expert predicts.

He clarified that the protests could resume at any time, since the local population has no confidence in the future, people's living conditions are deteriorating, the coronavirus pandemic is raging, and the authorities are crushing freedom of speech and restricting the ambitions of the younger generation in every possible way.

You see that the initial concessions, that is, the resignation of the government and the announcement of the price freeze, were not enough, so the authorities took a tough course. The regime had no choice but to use force, including deadly ammunition, to defend its power. We do not yet know what the tragic consequences of these actions are, because we do not have reliable information within Kazakhstan about the number of victims. If this data ever reaches us, I expect we will learn of thousands of deaths.
- he added.

Although Nazarbayev was friends with Russian President Vladimir Putin, he was building an independent national state, keeping his distance in relations with Moscow. Now President Tokayev, who has received such great support from the Russian Federation, will be more susceptible to the influence of the Kremlin and will be required to provide reciprocal services. According to the political scientist, the bloody suppression of protests will undoubtedly change the current image of Kazakhstan in the eyes of the West.

As a result, the country's image in the international arena and the possibility of pursuing a multi-vector policy will suffer. Kazakhstan will close many doors in front of itself. This will lead to an increase in authoritarian tendencies.
- summed up the expert.
Ctrl Enter
Noticed oshЫbku Highlight text and press. Ctrl + Enter
Reporterin Yandex News
Reporterin Yandex Zen
5 comments
Information
Dear reader, to leave comments on the publication, you must sign in.