Kazakhstan - a wrong move of the West, leading to the revival of the Union 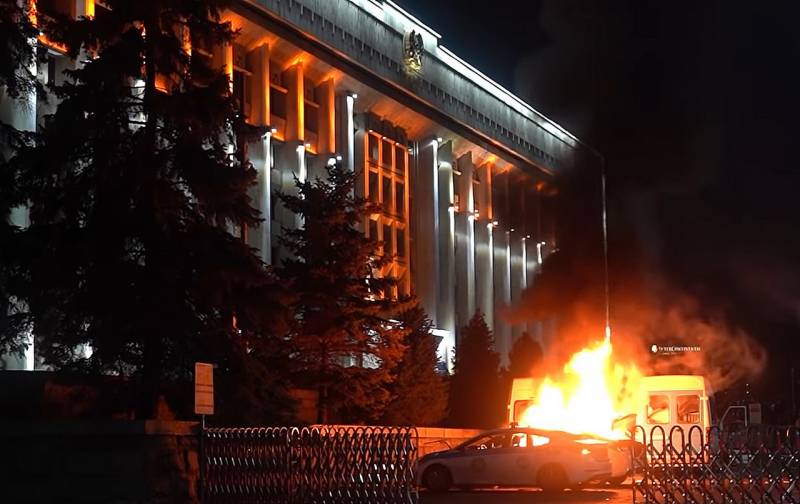 I will not describe in detail the current situation in Kazakhstan - everything is said and shown every hour literally in real time, whoever is interested - they know. We can only state the fact that the next "revolution" in the post-Soviet space has failed miserably.


The leadership of Kazakhstan, at first clearly frightened, quickly recovered from the first shocks and promptly turned to the CSTO, as well as directly to Putin. This saved them. Although at first everything looked rather pale: apparently, even on our own power structures, especially the army and police, it was impossible to count on one hundred percent. In addition to the obvious internal alignment, the recent example of the recently fraternal Ukraine put the local security officials in an extremely difficult position - who knows how everything will turn out there and what external forces are involved (and no one had any doubts that they were involved), so you will start your the duty to fulfill in accordance with the oath, and then you will be brought to your knees for it, like the Ukrainian "Berkut" ...

So the very fact of President Tokayev's appeal for military assistance to the allies in collective security has dispelled many well-founded doubts of many people in uniform. And as soon as the first "Ilys" of the Russian Aerospace Forces began to arrive in the country, even hotheads from among the next newly-made "revolutionaries" began to cool down. Those who still have something to lose, of course. As the peacekeeping forces quickly deployed and took various important government and infrastructure facilities under their protection, the hands of local, rather small, reliable special forces began to free themselves for active actions to clean the streets from terrorists. Yes, and their courage, too, clearly arrived - now, few people doubt the outcome of the battle.

Now everything is happening exactly according to this plan - a small, but just in case, to the teeth armed peacekeeping mission, for the most part with extensive real combat experience, does not get involved in battles, but goes over all security duties. Formally, the "Western partners", without whom everything could not do without, have nothing to complain about - the UN was informed that the Kazakhs themselves are engaged in the cleanup. The President of the country issued the involved security forces an unambiguous order to shoot to kill and without warning. Everything is clear. And the lightning-fast operation of the Russian Aerospace Forces on the transfer of troops leaves no illusions - if anything, we will pull up as much as necessary, and no one will seem a little. Here, from our side, everyone has clearly learned the Ukrainian experience and mistakes will not be repeated.

The first of the peacekeeping units to arrive were the Russians and Belarusians. Lukashenka himself has literally just been in a similar situation, so he obviously did not think for a long time. Asian neighbors, who are also kind of multi-vector, scratched their heads for a while, looked to the West and who to the East, but they quickly understood the emerging alignment - if the Kazakhs have this next “colored Maidan” triumph, then they themselves will inevitably await the same. And there, and conventional apartments in Rostov, this is also, one might say, a happy ending, given the local temperament and long traditions of eastern philanthropy ... so the troops really went to the rescue from all sides, and the best ones.

On the other hand, complete confusion and confusion, if not fear, is clearly visible. The fact that everything that is happening in Kazakhstan is now directly related to the upcoming negotiations between Russia and the West, I hope, no one doubts. And this attempt to "strike from behind" and, if not to seize the initiative, then at least to strengthen its own negotiating position, shows in all its glory how weak this position is at the moment. And the latest statement by the newly-minted "leader of the Kazakh opposition" Mr. Ablyazov finally finished off the whole situation. The fugitive criminal oligarch based in the West openly declares that his headquarters are located not somewhere, but ... in Ukraine.

It is difficult to believe that he is acting, being in France himself, on his own. This is something from the series Tihanovskaya and Guaido. But the "bench" of our "sworn partners" is already clearly empty, since such characters are attracted. And there is also a problem with professional organizers. How will the Kazakh leadership react to the fact that the headquarters, which allegedly started this whole bloodbath in their country and decided to overthrow them in this way, is located in Kiev? Well, they are unlikely to thank the Ukrainians. And who there, in Kiev, actually rules everyone, has also been known for a long time. So, after all this, Kazakhstan is also unlikely to scatter into the arms of the West. But he has already fled to the place where they will help, to the only place - the CSTO and Moscow. Yes, and to the collective West, to their standard bleating "about the need to negotiate with the protesters and not use force against them," the President of the Republic of Kazakhstan also responded unexpectedly harshly - you went, they say, there ... with your similar advice, how their execution ends all known.

One thing is surprising: not only do the “partners”, not bothering to invent something new, still work hard according to the old manuals, but even on their own, already according to the same manuals, the mistakes they make do not learn! A living example is Belarus and the recent attempt at a similar coup there. The result is an instant increase in rapprochement with Russia within the framework of the union state. They themselves, in the West, according to their own words, are more than anything in the world afraid of something like the revival of the USSR, but they themselves are doing exactly this, literally pushing the former Soviet republics back to each other. Conclusion: either there are absolutely no professionals who are really capable of something, or their situation is now so critical that they start to make mistake after mistake in panic.

It is clear that all post-Soviet states are literally packed with Western agents and structures of influence. But all this is clearly used in a hurry. They were preparing, and they had long-term plans, they were sure that nothing could interfere with their implementation ... But Putin suddenly struck a preemptive blow, which took them all by surprise. And in such a "out of place" that it is not even possible to hide it. And all the retaliatory steps of our adversary's situation only complicate and worsen. This has been said many times - Vladimir Vladimirovich has put the collective West in a position called "zugzwang" in chess, where any move only worsens the player's situation. But they, nevertheless, still try to move, and each of this very move really only worsens everything. There are only two ways out of "zugzwang" in the game - it is worthy to surrender immediately or to lose after a while. The first option is for the more sober and calculating, the second for the more stubborn. It is very interesting to watch the finale of this game, brilliantly played by the Russian president.

If the enemy continues to try to "move the pieces on the board" in this way, then the parts of the former Soviet Union will inevitably move closer and closer to each other back ... I definitely do not believe in the restoration of the USSR in its former form. But if, for example, the Union State of the Russian Federation and the Republic of Belarus expands somewhat into the Caucasus and in the Asian direction, then the situation may look extremely interesting. For the West, it seems to me, it will be even worse than the appearance of a new Russian miracle weapon. And with him? It's scary to think. This is no longer a return to 1991, but something more similar to 1949 ...
Ctrl Enter
Noticed oshЫbku Highlight text and press. Ctrl + Enter
We are
"We must beat first": the geopolitical alignment around Russia is continuously deteriorating
Ten "defeats" of Putin
Reporterin Yandex News
Read Reporterin Google News
78 comments
Information
Dear reader, to leave comments on the publication, you must sign in.