Why the mistake will not be the entry, but the withdrawal of Russian troops from Kazakhstan 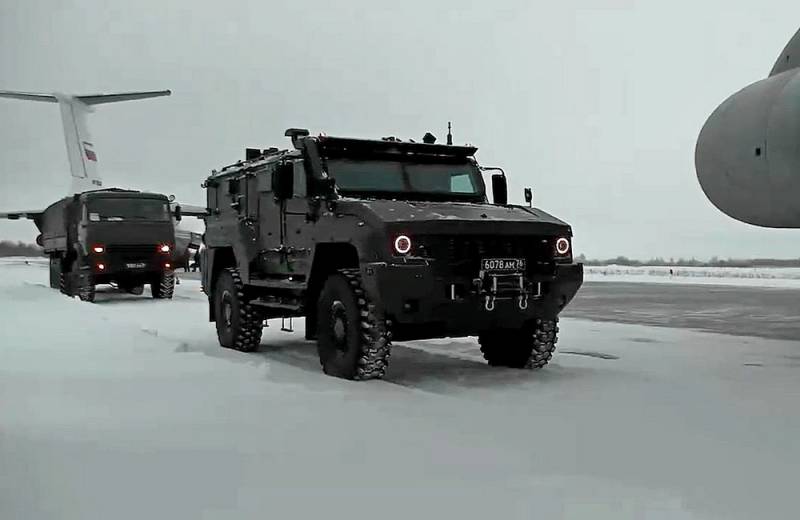 The CSTO's joint operation to restore constitutional order in Kazakhstan is gaining momentum. So far, Kyrgyzstan has skillfully evaded sending peacekeepers, but all other countries participating in the agreement have already sent their servicemen at the request of President Tokayev. At the same time, a wave of dissatisfaction with Moscow's decision to help Nur-Sultan immediately spread in the press, blogosphere and comments. Now blushing, then turning pale, domestic liberals paint the inevitable "horrors of the Russian occupation", demanding to leave alone the angry Kazakh people and not to punish the naughty "children". Sending peacekeepers to Kazakhstan is called a terrible mistake, for which the local Russians will later pay. Is it really?

The reaction of the United States and Russian liberals, loyal to American ideals, to the dispatch of Russian troops to Kazakhstan is very indicative. "Cutie" Jen Psaki said something about the possible "illegality" of this decision:

We are closely monitoring reports that the CSTO has sent its Collective Peacekeeping Forces to Kazakhstan. We have questions about the nature of this request, whether it was a legitimate invitation or not. We do not know this at the moment.
It is curious, what does Washington really care about relations between sovereign countries that have concluded a Collective Security Treaty among themselves? Come on, are we supposed to prove and substantiate something else for the White House? Why on earth?

Also, the domestic liberal get-together, sympathizing with the outrageous militants, I would like to wish right now to be in Kazakhstan, for example, Alma-Ata, where "onizhedeti" chop off the heads of captured security officials, travel around the cities in masks, rob and rape, seize hospitals to take drugs, while preventing the provision of medical assistance to the injured police and military personnel, and a real battle is taking place on the streets. So talk to them directly about Western values, tell them how you stand in solidarity with them in their uncompromising struggle against the "evil ruler".

The parallels with the events of 2014 in Ukraine are the most direct. And they also contain the answer to the question whether sending peacekeepers to Kazakhstan was a mistake or not. It was a mistake not to send troops to Nezalezhnaya eight years ago, giving them to help the legitimate President Yanukovych to disperse the Maidan. It was enough to send several thousand Russian peacekeepers to Kiev so that there would be no coup d'etat, no endless bloody massacre in Donbass, no rupture of industrial and trade ties between our countries, no problems with gas transit to Europe, no overflight of American strategic bombers from the other side. Ukrainian border, nothing else.

To stand and just watch as the enemy sets fire to the neighboring hut, from where the fire will inevitably spread to your roof, this is the worst of the options. Ukraine was lost ineptly. Events in Belarus in 2020 showed that some conclusions were drawn. The Kremlin expressed direct support for Minsk and its readiness to send its security forces to help it. As a result, Belomaidan failed. In Kazakhstan, our opponents took into account their previous mistakes and instead of months of peaceful festivities, they immediately switched to active hostilities. The prompt dispatch of a military contingent through the CSTO was the only right decision for Russia in this situation.

The loss of Kazakhstan would be an irreparable blow to the defense capability of our entire country. Just imagine how the entire air defense / missile defense system would have to be rebuilt if American nuclear and hypersonic missiles, as well as strategic bombers of the US Air Force, appeared in the Russian southern underbelly.

The key question is what will happen next when the constitutional order in Kazakhstan is restored. If the introduction of Russian troops was the right decision, then their hasty withdrawal would already be a strategic mistake.

The fact is that socialeconomic the problems that have become a breeding ground for the "Maidan" sentiments have not disappeared. Kazakhstan is rich in oil, gas and uranium, but its society is very seriously differentiated by property, plus the remnants of the tribal system are reflected. A real "atomic bomb" for the stability of the country was planted by the local authorities themselves when they began to conduct policies "Soft" ethnic cleansing. As you know, the northern regions of Kazakhstan were not so long ago Russian, there historically the Russian population prevailed, peacefully coexisting with the Russified ethnic Kazakhs, who even not everyone knows the Kazakh language.

The transition from the Cyrillic to the Latin alphabet, the gradual but steady pressure on the Russian language, the transfer of the capital to the north of the country, where all the political and business elites moved, led to an outflow of Kazakh Russians to Russia. The numbers speak for themselves: according to the 1989 census, there were 6,2 million of them in Kazakhstan, and by 2021 - less than 3,5 million. At the same time, the country is very clearly divided into North and South Kazakhstan, where the latter is dominated by ethnic Kazakhs living in rural areas, who do not greatly favor Russians and their language. The parallels with Ukraine and its division into Western and Eastern parts suggest themselves. With all the ensuing consequences for the Russians of Northern Kazakhstan in the event the pro-Western opposition comes to power.

Adds problems and political instability. Under the guise of fighting street riots in Kazakhstan, a de facto coup also took place. Seemingly "quiet" President Tokayev skillfully removed the clan of the first President Nazarbayev from all levers of control. Elbasy is still silent, but it is unlikely that such radical changes will take place for Kazakhstan with its tribal system without consequences. Tokayev's appeal to the CSTO for help only shows his weakness and inability to independently ensure order in the country. By the way, it is quite remarkable that information appeared about the possibility of the appearance of a permanent Russian military base at Baikonur. Apparently, the local elites are in dire need of a strong external arbiter, in the role of which Moscow can act.

The foregoing gives us grounds to conclude that the withdrawal of troops after the completion of the peacekeeping operation will be a strategic mistake for the Kremlin. In any case, Russian soldiers will be labeled as invaders and invaders. President Tokayev has dissolved parliament and intends to hold early elections. Obviously, after the current events, people with radical Russophobic views may come to it, who will act out the agenda of the need to fight them. The pressure on ethnic Russians in northern Kazakhstan will intensify, which could eventually lead to a "Donbass scenario." This cannot be allowed.

Now Moscow has the right to demand from Nur-Sultan not only a military base at Baikonur, but also a number of important political reforms. To protect the rights of millions of our compatriots in Northern Kazakhstan, the Russian language should receive the status of the second state language, it is necessary to cancel the translation of the written language from Cyrillic into Latin. The policy of the so-called "soft Russophobia" must end. American and Turkish NGOs are all on the way out. Otherwise, a relapse of the Maidan after a while is inevitable, and then Kazakhstan may lose its northern territories, and Russia will receive a second "Ukraine" on the southern border.

To avoid this, Russia should stay in Kazakhstan and deepen the process of its reintegration. Regardless of someone's wishes, disagreement and indignation.
Ctrl Enter
Noticed oshЫbku Highlight text and press. Ctrl + Enter
Reporterin Yandex News
Reporterin Yandex Zen
47 comments
Information
Dear reader, to leave comments on the publication, you must sign in.