How Kazakhstan will repay Russia for helping to disperse "terrorists" 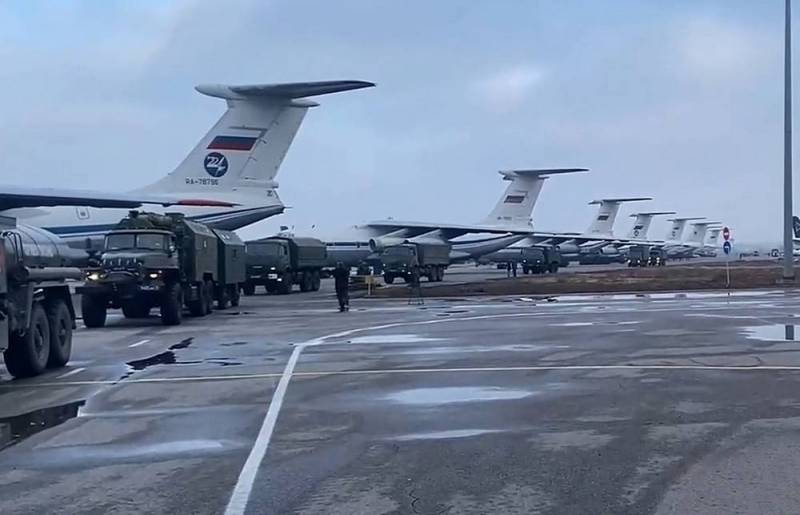 Over the past night, the situation in neighboring Kazakhstan has deteriorated sharply. The militants, or you can’t name them otherwise, seized weapons and started shooting in large cities. The presidential palace was captured and set on fire. Stores are robbed, women are raped. The bandits scoff at the captured Kazakh soldiers, beating them and leading them naked through the winter streets. Another "revolution of dignity" in all its glory. The question is, how exactly should Russia react to what is happening, and what will happen next?


Note that initially, the Kremlin clearly did not want to interfere in Kazakhstani events, hoping that the local authorities would deal with it themselves. It didn't work out. The load of accumulated socialeconomic the problems involved in tribal ties and traditions, clan corruption, banal greed and stupidity turned out to be too great. It turned out that one push, skillfully organized from the outside, was enough for this entire system of internal political structure that had been built for decades to collapse at once. Less than a week has passed since the beginning of the New Year 2022, when the monuments to the first president and "leader of the nation" Nursultan Nazarbayev began to be demolished in Kazakhstan. Who would have thought that this was possible?

In fact, smart people have long understood that something similar will happen across the entire periphery of Russia. Ukraine, Armenia, Kyrgyzstan, Belarus, now here is Kazakhstan. The goal of the collective West, led by the United States, is to surround Russia with a ring of hostile Russophobic regimes, against which Moscow will be forced to take away its already small forces and resources. And, despite the prospects, the Kremlin still hoped to do without direct interference in the elimination of the "gas Maidan".

The press secretary of the President of the Russian Federation Dmitry Peskov yesterday morning stated literally the following:

We are convinced that our Kazakh friends can independently solve their internal problems.
Failed. By the evening, the situation deteriorated rapidly, real street fighting began in cities with the use of small arms. President Tokayev made an appeal to the CSTO countries to provide military assistance in the fight against the terrorist threat coming from outside. And he received consent to this. The current chairman of the collective security council Nikol Pashinyan published the following message:

The CSTO Collective Security Council, in accordance with Article 4 of the Collective Security Treaty, decided to send the Collective Peacekeeping Forces of the CSTO to the Republic of Kazakhstan.
It is reported that fighters of the Russian and Belarusian Airborne Forces, as well as other countries of the CSTO, may be sent to Kazakhstan. At the same time, it is emphasized that the peacekeepers will be there on a temporary basis, until "stabilization and normalization of the situation in the country." The tasks of the Russian and Belarusian paratroopers do not include the conduct of hostilities against terrorists, bandits and pogromists, but only the protection of key infrastructure facilities and government bodies. It is assumed that this will free up the Kazakh security forces to pacify the attempted coup.

Sounds quite reasonable. However, judging by the statement of the Major General of the Air Force of Kazakhstan, the first Kazakh cosmonaut Toktar Aubakirov, they expect something different from our military:

How is it that I have to kill my brother? I can not. Let us then resort to the help of those with whom we have concluded an agreement. Always, in all cases, when it will be hard for me, you can help, please. We will help you. And this treaty is the CSTO.
In other words, the right to disperse mass protests by force and pacify the riots is given to the Russians and the Belarusians who joined them. And then what?

And then we will be asked to leave when "the situation is normalized." Here I would like to remind you of what public resonance was caused by the staging in a Kazakhstani kindergarten of a scene about the execution of a Kazakh student by Soviet soldiers. After our military has to fight with the Maidan militants (Who will ask them if they want to fight or not? They themselves will attack in order to provoke and force them to defend themselves.), New antiheroes will appear in modern Kazakhstan - “Russian soldiers who shot a peaceful protest”. After the Moors, who have done their job, have to retire, everything said and done will certainly be used against Russia.

Does this mean that Kazakhstan does not need help? Of course no. It is imperative to help, otherwise the consequences of the coming to power of the pro-Western opposition will be the most dire. This is, at best, the withdrawal of Kazakhstan from the CIS, the EAEU and the CSTO, the rupture of industrial ties, diplomatic relations, the harassment of the Russian-speaking minority, and at worst, the appearance in the southern underbelly of Russia of elements of an American dual-use missile defense system, from where the Tomahawks will target key military targets. -industrial infrastructure in the Urals, refusal to supply uranium for the domestic defense industry, etc. This cannot be allowed in any way. But then what remains?

We have already come to the conclusionthat Kazakhstan will have to make a fundamental choice, with Russia or against it. Arriving, the CSTO forces will have to stay there indefinitely in order to become the guarantor of a relapse into the Maidan. Kazakhstan itself will have to seriously reconsider its internal and external policies: close down American and Turkish NGOs, expel foreign biological laboratories from their territory, return the Cyrillic alphabet, guarantee the rights of the Russian-speaking minority and the state status of the Russian language, stop telling evil tales about the alleged "deliberate Holodomor", withdraw from the Turkic Council of "Sultan" Erdogan, etc. ... Nur-Sultan will have to take real steps towards unification with Russia and Belarus in a common Union State.

Without the fulfillment of these key positions, the “service of violent dispersal of the Kazakhstani Maidan” will still backfire on Russia itself.
Ctrl Enter
Noticed oshЫbku Highlight text and press. Ctrl + Enter
Reporterin Yandex News
Reporterin Yandex Zen
85 comments
Information
Dear reader, to leave comments on the publication, you must sign in.