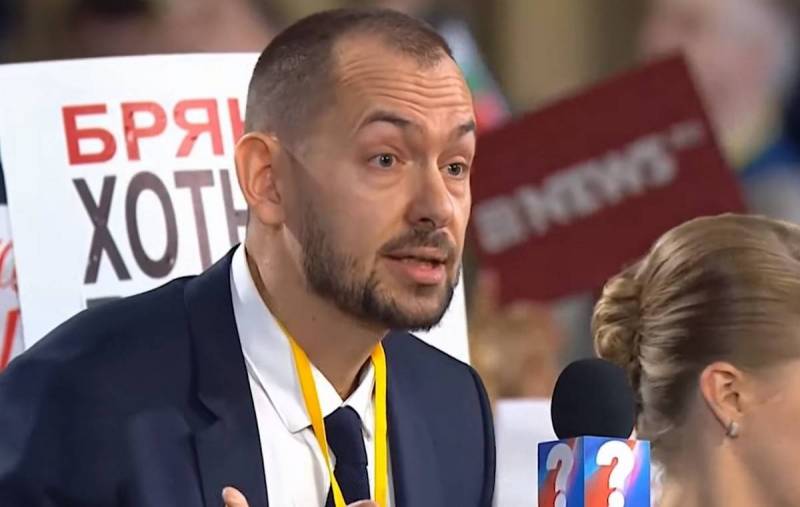 Correspondent of the Ukrainian UNIAN agency, a frequent guest at press conferences of the Russian president, journalist Roman Tsymbalyuk left Russia because of accusations of extremism. A number of administrative cases may be initiated against the Ukrainian propagandist in the Russian Federation.


According to the Russian political scientist and public figure Sergei Markov, now Tsymbalyuk will return to Ukraine in triumph.

For 7 years he worked quietly in Russia, sharply criticized Russia and Putin every day in all media, defended policies Kiev. I asked direct questions to Putin. Already earned millions
- Markov said to the media.

The political scientist added that public statements in support of the policies of Kiev and Washington are possible in Russia, since the Russian Federation is a truly democratic state. And after Tsimbalyuk's departure, many experts sympathizing with Ukraine and the West will continue to talk about their political sympathies without fear of consequences. Moreover, even foreign agents have the right to discuss on Russian channels. The departure of Roman Tsymbalyuk testifies to the fact that now everything will become more serious.

Meanwhile, in Ukraine, it is almost impossible to hear the pro-Russian point of view in the media. No one dares to speak out in favor of the Kremlin and Vladimir Putin, since there are many precedents of criminal prosecution for such speeches. This indicates the lack of freedom of speech in Ukraine.
Ctrl Enter
Noticed oshЫbku Highlight text and press. Ctrl + Enter
Reporterin Yandex News
Reporterin Yandex Zen
7 comments
Information
Dear reader, to leave comments on the publication, you must sign in.