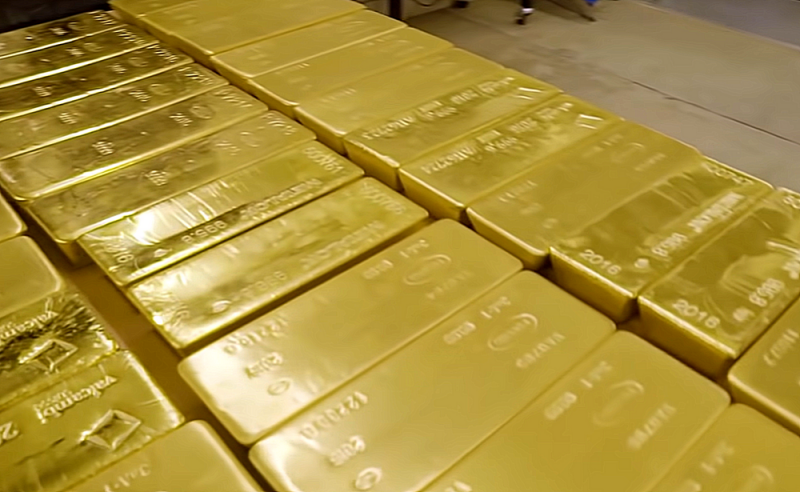 Despite a noticeable decline in the exchange rate ($ 1700 per ounce against $ 2067 a year earlier), at the end of 2021, gold set a record in terms of demand over the past three decades. The precious metal is bought up by everyone - central banks, professional investors, and individuals. What caused such a rush of demand on the eve of the New Year?


As for the records, this is not an exaggeration, today the total volume of reserves of the "yellow metal" in the Central Banks of all countries has reached the level of 36 thousand tons, a record level over the past 31 years. In the third quarter of the outgoing year, Russia bought 6 tons of gold, Kazakhstan - 7 tons, Brazil - 9 tons, Uzbekistan - 26 tons of gold, and India - 41 tons of this precious metal. Ireland and Singapore also joined the ranks of "accumulators" - 2 and 26 tons of gold, respectively.

In addition to central banks, ordinary people are actively buying yellow metal in its various forms. In the countries of Southeast Asia, the demand for jewelry gold has increased. By the end of the year, the aggregate demand for it in India may exceed 400 tons, and in China - 500 tons. By the way, it is “jewelery” that accounts for about 40-50% of the precious metal produced in the world. But not only Asia, with its love for ostentatious chic and glitter, is increasing the demand for gold. Conservative Germans are actively buying coins and bars. The volume of demand in Germany exceeds the global indicators by at least 20%. Interest in the yellow metal is growing in other Western countries as well.

But why is this happening? The set of measures being taken is objectively aimed at reducing the position of gold: raising the key rate, ostensibly to fight inflation, strengthening the dollar. However, despite the loss in price, the precious metal is still very popular with everyone. Presumably, there are more powerful factors influencing investor sentiment.

At first, this is what can be roughly called a "pandemic project". We in no way deny the existence of COVID-19, its danger to health and the need to fight it, but objectively pandemics, or rather, the mechanisms for their prevention and fight against them, give too much power into the hands of a very narrow circle of people to be so easy with it breake down. The introduction of lockdowns, the forced isolation of entire countries is a powerful tool of political and economic pressure.

Pandora's Box is already open. Sooner or later, the coronavirus will exhaust itself, but another, possibly more dangerous infectious disease may take its place. An ordinary person has nothing to oppose to such a misfortune, so everyone is trying to create a "safety cushion" to the best of his ability.

Secondly, the big threat comes from the so-called "global energy transition". Carried out with the best wishes, the abandonment of traditional energy sources in favor of renewable ones carries a lot of new risks. So, recently, southern Texas froze over, being unprepared for the arrival of the Arctic cyclone and the fact that the blades will freeze on numerous wind turbines, and the work of oil rigs will stop. The light wind played a cruel joke with Europe, where a real energy crisis is now growing.

By the way, the current energy crisis is a side effect of the EU's attempt to rather abandon fossil fuels. We started ahead of time, had not been sufficiently prepared, and this is the natural result. The European Union is now paying for the green agenda with abnormally high prices for energy and electricity, which leads to a decrease in consumer demand and industrial production.

Thirdly, the risk of major armed conflicts has sharply increased, which will certainly hit the world the economy... Sooner or later, but Russia will have to somehow solve the "Ukrainian problem", which will lead to new economic sanctions: disconnecting the banking sector from SWIFT, banning operations with the state debt, etc. There is a high likelihood that the transit of Russian gas to Europe will decrease, or even stop altogether. The possibility of deploying American nuclear and hypersonic weapons in Eastern Europe and Ukraine, as well as some kind of military response from the Kremlin to this step, only increase the risks political and economic instability.

The likelihood of a serious armed conflict in the Middle East is increasing. Iran has stopped literally half a step from creating its own nuclear weapons, which will inevitably entail military aggression from Israel and the United States. One of the retaliatory steps will be the blocking of the Strait of Hormuz by Tehran, which could aggravate the already difficult situation on the world energy market.

It is already clear that the coming year 2022 will be difficult. The former "globalist" system of the world order is shaken and is trying to find new meanings of its existence in order to return to a stable balance. This is a lot of trouble for all of us, and therefore it is not surprising that those who can afford it take gold as a traditional “defensive” asset.
Ctrl Enter
Noticed oshЫbku Highlight text and press. Ctrl + Enter
We are
The trend is alarming: has gold begun to slowly “flow away” from Russia?
Gold reserves: Russia strives for fourth place in the world
Reporterin Yandex News
Read Reporterin Google News
12 comments
Information
Dear reader, to leave comments on the publication, you must sign in.