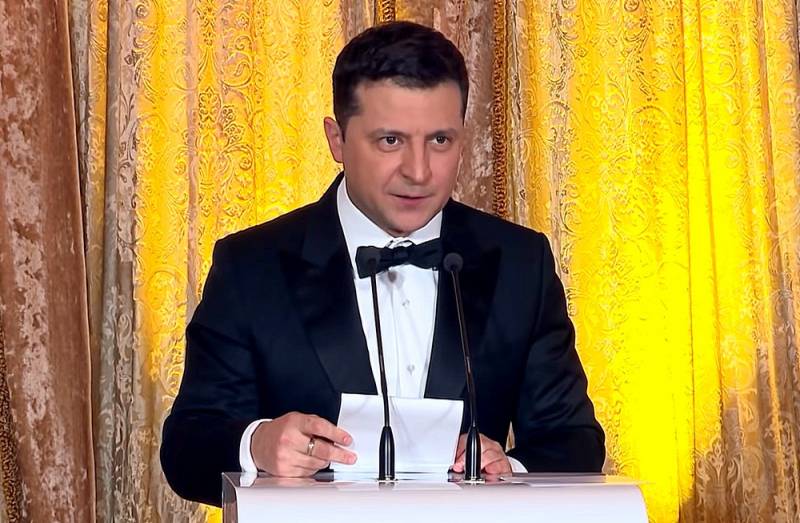 The fact that the current head of the Ukrainian "state" appears to be a kind of misunderstanding in the eyes politicians from Washington, starting in 2014, almost everything in this country was defining, it was clear from the beginning. Painfully frivolous and dismissive was the attitude towards the leader of the state, which the United States from time to time, as if in mockery, mentions almost as one of its own "main strategic partners." Either they were going to send the minister for the anniversary of "nezalezhnost" some "wrong" (and still they sent God knows who), then they took him by the nose on a visit to the White House for some time ...


It is clear that one should not expect any kind of respectful attitude towards the leader of the native tribe from the "white masters" in principle, but here everything looked very bad. At the same time, if at the first stages of his stormy "state activity" the president-clown seemed to his overseas "partners" a rather amusing misunderstanding, now it has turned into something that causes irritation and annoyance. And also, very much like that, an irresistible desire to get rid of - as from a splinter in an inconceivable place. What signs and evidence are there? Let's try to figure it out.

I have already repeatedly stated, but let me repeat once again: despite the declarations about our complete “independence”, “non-bias” and similar things, the really serious publications of the United States, so to speak, the “pillars” of the “free press” there, are definitely, if not direct "mouthpieces" of specific parties, then, to put it mildly, channels for broadcasting the opinions and thoughts of certain influential groups in American politics. There is no other way in our world, where everything costs money (including renting an editorial office, printing ink, paper and many other things), it simply does not happen - even in the United States, at least anywhere else. Because of this, the friendly media salvo, which is currently fired at Vladimir Zelensky from all the "main calibers" of the American media, says a lot.

The first "sighting" shot was made by The Washington Times, which published a very unpleasant article for the clown president about a week and a half ago, in which a whole bunch of various accusations were brought against him. They boiled down, for the most part, to the fact that Zelensky "replaces state policy with purely personal goals," for the achievement of which he "started a war against the most influential and richest man in the country." This, of course, is about Rinat Akhmetov, whose correctness and infallibility the newspaper defends with fervor leading to bad suspicions. “How is it,” the authors ask, “that Putin’s invasion is on the doorstep, and the president, instead of consolidating the country and preparing it for defense, went into internal“ showdowns ”with a clearly selfish implication”? Generally speaking, without denying the presence of oligarchs in Ukraine, so to speak, as a class, The Washington Times considers all Zelensky's activities directed against them to be “hypocritical” and “sanctimonious”, blaming him for the fact that the interests of another representative of the same “stratum” - Igor Kolomoisky does not offend him in the least.

The clown president also gets "nuts" for his wretched "reforms", which are unsuccessful, "like everything that Zelensky and his government touch," and, again, are "hypocritical." At the same time, readers are reminded that billions of dollars have been invested in the process of “reforming” and “transforming” the “non-cash”, in fact, there’s no use for a cent - everywhere there is continuous lack of professionalism, corruption and losses. The material ends with an unequivocal warning to the White House and the State Department, which, according to its authors, Zelensky can easily "bring under the monastery, setting up a" military fire to save his own power. " In principle, nothing new or, as Ostap Bender said, congenial. Moreover, it was, as they say, just a saying. The next "shot" was made by a much larger caliber - by The Washington Post.

Tellingly, all theses of the previous publication are repeated here almost as a carbon copy. The only difference is that Mr. Akhmetov personally comments on this material. By the way, in addition to harsh criticism of Zelensky, who is engaged in "compiling lists of enemies of the people", he declares his readiness to act as a "defender of freedom of speech in Ukraine." Novo. Suddenly. Boldly. Be that as it may, but the leitmotif of the publication is the accusation of the president that he is engaged in “beating up personnel” and “dividing the country” literally “on the verge of“ Russian aggression ”. The authors make the assumption that all this is the clown's wretched attempts to save his hopelessly crumbling rating, which is more important to him than "a potential Kremlin attack." Such, perhaps, will fail the whole thing, so is it worth Washington to support him?

"A comedian sits on a comedian and jogs about ..."

However, both of the publications mentioned above (which pretty much look like the media "response" of the Ukrainian glavoligarch to the local president) pale before the third, which appeared in the even more influential The New York Times. It is really worth dwelling on it in more detail. The author of the article, Andrew Kramer, is by no means limited to a standard set of reproaches against Zelensky, but is taken to disassemble his "reign", as they say, "bit by bit." The unfortunate president is reminded of his comic past. But, okay, just that. According to the author, Zelensky "created his own environment from the same comedians like himself, who have no idea about military affairs or diplomacy." (Wow, what a discovery ...) Kramer scrupulously lists the key figures from those "three dozen colleagues in the humorous sphere" that Zelensky thought of placing in leading positions in the state apparatus. The presidential office is run by producer and media lawyer Andriy Yermak. The same producer (and screenwriter in addition) Sergei Shefir is the main assistant to the "first person" of the state. The security service of Ukraine ended up in the hands of another former "quarter" - Ivan Bakanov. And so on and so forth...

Kramer makes the "stunning" conclusion that with such a "personnel policy" of Zelensky, Ukraine, perhaps, "will not cope with the Russian invasion", no matter how much the United States may help it. In this context, we are no longer talking about any "offended oligarchs". The New York Times quite specifically expresses fears that it is precisely “the amateurism of Zelensky and company”, their “ill-considered false steps” that can create a “casus belli”, become a pretext for a war with Russia, the consequences of which will have to be cleared up by Washington. "Relations between the United States and Moscow could deteriorate significantly," and the blame for everything will be the stupid clown who became president so inopportunely!

Reading all this, you feel an intolerable desire to quote "The Diamond Hand", and recklessly. “And what, Comrade Gorbunkov drank for ten years, rowdy and morally decayed? - No, all this time he skillfully disguised himself as a decent person! And what, Mr. Zelensky on the third (tenth, hundredth) day after his election was not a layman, obsessed with the principle "well, how not to please your own little man"? Didn't he put people suitable for working for them on the most important posts, exactly as much as Vitalik Klitschko did for lecturing on rhetoric and oratory?

Why go far if the same The New York Times, which today, pointing a finger at Ukraine, shouts to the head of the White House: "Oh, Joe, look what clowns!" big top "the main democrat of the post-Soviet space." And before that, it provided its pages for the publication of the "brilliant" opus of Zelensky himself, in which he was engaged in deafening self-PR, using the anniversary of the inauguration as an occasion. Was he so skillfully disguised as a wise statesman and bearer of "true democratic values" that it turned the eyes of the hardest "sharks of the pen" of American journalism? Nothing of the kind, of course. It was just that they saw the president-clown as a harmless fool who played in his wretched "sandbox", but, if necessary, would get into a frunt and rush to "fulfill" the order received from overseas. And only now, having fully realized all the inadequacy and the almost complete lack of control of this character arising from such, in the USA they sounded the alarm: "He will break the whole game for us!" This one can. And he will certainly do it.

In the article cited above from The Washington Times, with the same purely American simplicity that is worse than theft, they admit: because of Zelensky's idiotic twists, "all the progress made in Ukraine in 30 years can easily be nullified!" According to the authors, this cannot be avoided if Russia “intervenes in the situation preventively” and simply “dismantles” the Ukrainian, excuse the expression, “statehood”. This is what they are really afraid of, and not that the clown, whose associates disrupted the heating season and put the country's energy system on the brink of collapse, will freeze hundreds of thousands of residents of the “nezalezhnoy” to death. Or will ruin a certain number of soldiers of the Armed Forces of Ukraine, throwing them into a suicidal "attack" on the Republic of Donbass. On this kind of "little things" in Washington wanted to spit. But the realization of how this could all end up if Moscow does not miss the opportunity that has presented itself drives the politicians there into fear and rage.

Zelensky will most likely be changed - and in an emergency mode, so that this bastard does not manage to do something big during the epoch-making negotiations between Washington and Moscow on the "deal of the century" or before them. It is likely that the United States has already decided on a successor. In its article, which leaves no stone unturned on the image of a clown, The New York Times quotes ex-speaker of the parliament of the “non-existent” Dmitry Razumkov, who was dismissed by him, complaining bitterly that “everyone expected a comedy from Zelensky, and he made a horror film ". Why not? For the United States, all Ukrainian "politicians" are one person and one price. It's funny, but reproaching the clown frolicking there in the presidential office that he “built the power vertical solely on the principle of loyalty to him personally,” American curators have been doing exactly the same thing, and for more than a year now. What to do if, as a result, outright freaks and jesters make their way to the top? The main thing here is different - so that with the next change in their composition in Kiev, not the slightest illusion should arise in Moscow.
Reporterin Yandex News
Reporterin Yandex Zen
16 comments
Information
Dear reader, to leave comments on the publication, you must sign in.