Homosexual Christmas: Gay Propaganda in the West "Loses Its Shore" 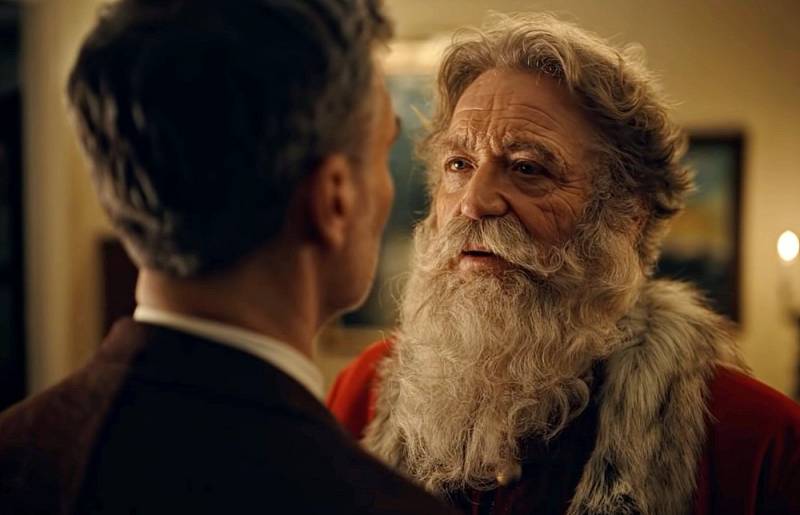 The Norwegian ad featuring the homosexual Santa Claus (analogous to the Russian Santa Claus) has become a hit, according to the BBC during Christmas week. The Norwegian state postal service "Posten", which released it, thus decided to "congratulate" its fellow citizens. Four-minute video under the headline "When Harry Met Santa," shows a middle-aged man, flashing naked torso, writing a letter to Santa Claus at the North Pole. The advertisement ends with a personal meeting and a long "French" (that is, mouth to mouth) kiss between "Harry" and Santa Claus. Moreover, this was clearly done on purpose. So that the meaning is imprinted as much as possible in fragile minds.

We wanted to celebrate 50 years since the repeal of the law prohibiting same-sex relationships
- said Monika Solberg - Marketing Director of the Norwegian postal operator.

They noted, so they noted: on Youtube alone, the "postal" advertisement with homosexual Santa was viewed more than two and a half million times, which is a lot for the five-million-strong Norway (especially considering that the advertisement was released exclusively in Norwegian). However, is it worth saying that the very fact of the appearance of such a video was instantly replicated by numerous Western tabloids and media? And this was done, as expected, in a positive way. Say, look what good fellows! What developed and smart people are doing advertising in Norway, what right thoughts are putting into the heads of their younger generation! Homosexual Santa bringing gifts to Scandinavian children, what could be more tolerant? Everything is in the spirit of the new-fangled perverted agenda imposed by the countries of the collective West.

Where does westernization lead?

It would seem, what does Russia care about all this: if Europeans want to plant LGBT culture among their children - let them do it. However, the problem is that no one in the collective West is going to stop at their own citizens. And they strive to broadcast unconventional gender ideas around the world. Including Russia.

And when in 2013 the Russian Federation adopted a law banning gay propaganda among children, it was immediately condemned by Western policy and public figures. And just four years later, the European Court of Human Rights (ECHR) has already recognized this norm as discriminatory and violating the right to freedom of expression, enshrined in the tenth article of the European Convention on Human Rights. The fact that the freedom of one person ends exactly where the freedom of another begins was not mentioned in the ECHR. As well as the fact that children, who become targets for content spreading non-traditional values, simply because of their age cannot make informed decisions about it. The susceptibility of a child's psyche is much higher than that of an adult, while critical thinking, on the contrary, is not yet developed. So imposing artificial gender constructs on minors and promoting same-sex relationships is unacceptable and at least should be an offense, which was enshrined in Russian legislation.

After all, a homosexual Santa Claus is really the worst thing that you can think of in order to promote unconventional relationships among children. The exploitation of a bright childish image, a symbol of Christmas, in order to promote the LGBT agenda is a blow below the belt, clearly demonstrating that children are the ultimate goal of Western "tolerant" politics. And this is not to mention the fact that the prototype of Santa Claus is actually Saint Nicholas. That is, by portraying the main Christmas character as a homosexual, Norwegian advertisers also directly insult the feelings of all Christians, for whom the very fact of such a production is blasphemy.

However, it would be unfair to say that this came as a surprise to the Scandinavian society, which lies in the wake of the American "tolerant" discourse, which is propagated throughout the world. And it's not just advertising. Today, it is almost impossible to meet a Hollywood film without, albeit briefly, but still clearly demonstrated unconventional relationships. This is not to mention a specific subgenre of cinema, where all the screen time is occupied by a gay theme. And even if in appearance all this looks like a spontaneously emerging social movement, in fact it is a deeply thought-out state policy aimed at cultural expansion.

The collective West, led by the United States, is today engaged in a new wave of world colonization. After all, this is exactly how the notorious soft power should work - in formatting the population of the adversary countries (which include Russia) and undermining their statehood from within. Suffice it to recall how it happened with the Soviet Union. No one argues that at the end of its existence economic the situation was not the easiest one. But was the situation in the country more difficult than at the height of the Great Patriotic War? Should economic liberalization and the transition to a market have ended with the collapse of the world's largest state? And what prevented the implementation of all the same reforms that were post factum carried out on the territory of each of the post-Soviet republics, within the framework of a still unified state? The desire for democratic values, imposed, among other things, by radio stations broadcasting to the territory of the USSR, which were now called foreign agents, led to the fact that the liberals of the late eighties, having enlisted the support of a handful of revolutionary passionaries and bureaucrats pursuing their own goals, with their own hands destroyed the and at the cost of tens of millions of lives, a country secured from the Nazis.

At the same time, all this was accompanied by a powerful cultural impulse designed to plant democratic values ​​in the minds of citizens, most of whom were absolutely not ready for such a turn. The nerve of the era, as in the case of LGBT cinema and advertising, is again on the screen and can be clearly seen in such a unique monument of cinematic art as the Russian perestroika cinema. The West in it is the promised land. The USSR and Russia are a place from which to escape. Everything Soviet and Russian is almost always bad and outdated, which should be got rid of. Everything American and Western European, on the contrary, is good and new, which is worth striving for. The domestic perestroika cinema existed, according to experts, for about ten years: from 1985 to 1995. And, like any other illusion, it crashed into a cruel reality. It is not for nothing that the end of this period fell on the collapse of the USSR, but six years later. The undermining of all state foundations and the rampant crime in the dashing, but rather the hungry and bloody nineties, quickly demonstrated to the fans of Western values ​​how deep their delusions were. And how dear was the desire to break all that was in the end, in order to take everything else's.

Further, the degree of worship of "democratic values" in Russia gradually began to fade, but with the advent of the Internet, the situation began to change again. Armed with tolerance and the LGBT agenda, the collective West with renewed vigor launched a campaign to Westernize world culture, including Russian culture. And he aims primarily at the categories of citizens most vulnerable to new trends - minors. Today's children are tomorrow's adults. It's trite, but true. And if today the new Russian generation is brought up on Western culture, which is acquiring more and more perverted outlines, then its representatives will have a corresponding worldview. It is not difficult to imagine what consequences this may lead to the country in the future.
Reporterin Yandex News
Reporterin Yandex Zen
18 comments
Information
Dear reader, to leave comments on the publication, you must sign in.