Will Russia be forced to pay the € 290 billion bill? 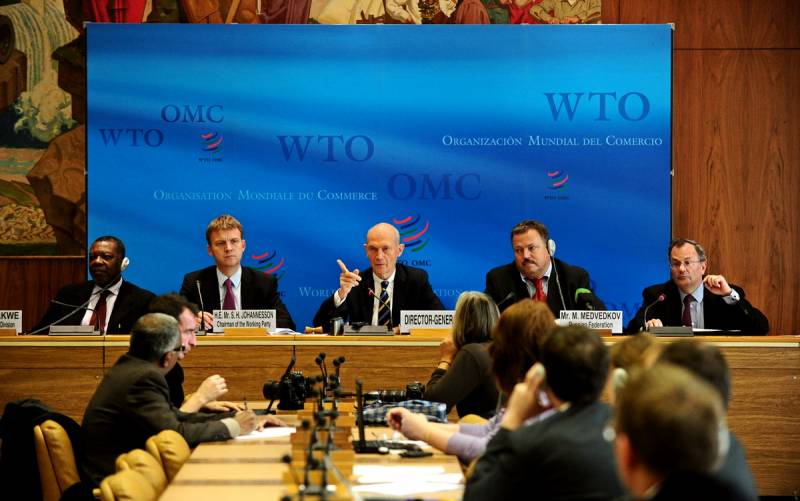 The European Union, and then the United States, billed Russia for 290 billion euros for violating the WTO rules. It is quite obvious that this is not just a trade dispute, but the beginning of a full-fledged "trade war" by the collective West within the framework of a new "Cold War". The most offensive thing about this is that this "atomic bomb" was laid under our country by its own authorities.


According to media reports, the European Union has filed a complaint with the World Trade Organization about Moscow's "discriminatory" actions:

In 2019, the cost of published tenders for Russian state-owned enterprises amounted to 23,5 trillion rubles, or approximately € 290 billion, which is equivalent to about 20% of Russia's GDP.
We are talking about measures for direct state support of domestic producers to the detriment of foreign ones. Several of them were counted in Brussels:

At first, this is the introduction of national quotas for purchases at public expense. In this case, a certain share of goods must necessarily be of Russian origin.

Secondly, for the purchase of engineering products abroad, you first need to obtain permission from the Import Substitution Commission. There is one in our country.

Thirdly, European companies complain that Russian companies win tenders, indicating the price is 15-30% lower than that of foreign competitors, but then receive from the customer, represented by the state and its authorities, the full amount of the contract.

The EU and the United States do not understand this and believe that their interests in the framework of the World Trade Organization are not being observed, since their exporters do not have the promised free access to the domestic Russian market. The total amount of claims is astronomical - 290 billion euros. The response in Moscow is very indicative.

Officials in high offices say that Russia's actions are a forced response to the sanctions policies the United States and the European Union themselves, which, without the consent of the UN Security Council, introduced restrictive measures against our country. It is quite rightly pointed out that this very WTO, where the complainants turned, did not protect the rights and interests of the Russian side in any way. Economists and political scientists believe that the World Trade Organization is more likely dead than alive, and therefore the collective West will not be able to collect these hundreds of billions of euros from Moscow. But we would like to focus on another aspect of this problem.

How and why did such claims and lawsuits become possible at all?

Recall that the WTO is the brainchild of the so-called "globalists", created in order to predominantly defend the interests of transnational corporations and large developed powers to the detriment of everyone else. It is in this hypocritical approach that the "dark side of liberalism" about which we have already reasoned previously. The main question is, why then did Russia join this openly pro-Western international structure?

Here I would like to introduce a new rubric under the conditional name "remember the past" and refresh the memory of the statements of prominent statesmen of that time about the WTO. In 2009, at a meeting with members of the Valdai Discussion Club, President Medvedev announced that the decision to join the World Trade Organization had been made, and he and the Prime Minister had no differences on this issue:

They began to say that the president has one point of view, while the prime minister has a different one on this issue. This is mistake. The decision on how we will join has been made ... Since we are not yet accepted into the WTO, they are holding us somewhere in the corridor, at the entrance, then we must deal with the integration of our economies - Russia, Kazakhstan and Belarus ... But this does not mean that we are against joining the WTO. In my opinion, everyone has already understood that it is better to have a Russia that joined the WTO, which acts according to the WTO rules, than some other Russia.
Indeed, “some other Russia”, freely defending its national interests, was not needed by anyone. In 2010, the then head of the Ministry of Economic Development Elvira Nabiullina argued that all sectors of the national economy would benefit from accession to the WTO. economics... And the indisputable authority and "guru" in the field of liberal approaches to the economy, Anatoly Chubais, promised an annual increase in GDP at the level of 1,2%. How did this step turn out in practice?

The fact that Russia opened its domestic market to Western companies. The tales that one can compete on equal terms with transnational corporations turned out to be fairy tales. Look, for example, at the fleet of Russian companies, how many Russian and foreign aircraft are there. And state support is directly prohibited by WTO rules. After 2014, it suddenly turned out that the machine tools and other high-tech equipment we needed would not be sold even for petrodollars, and our own no longer exist. It was necessary, in violation of the requirements of the World Trade Organization, to switch to direct government subsidies to a half-dead domestic industry. Now we are being billed for this for 290 billion euros. It is into such a hole that the Russian economy was driven by their own liberals in power.

By the way, the statement that it will not be possible to collect anything from us within the framework of the WTO does not seem reasonable. It is the United States that blocks the work of the appellate instance. If they need to put more pressure on the Kremlin, they will carry out an accelerated "resuscitation" of it, and how the Western courts work can be seen on the example of Gazprom.
Ctrl Enter
Noticed oshЫbku Highlight text and press. Ctrl + Enter
We are
Peace enforcement operation. Russia inflicts a preemptive strike on Kiev
Three years left: Ukraine will be sold in parts
Reporterin Yandex News
Read Reporterin Google News
84 comments
Information
Dear reader, to leave comments on the publication, you must sign in.