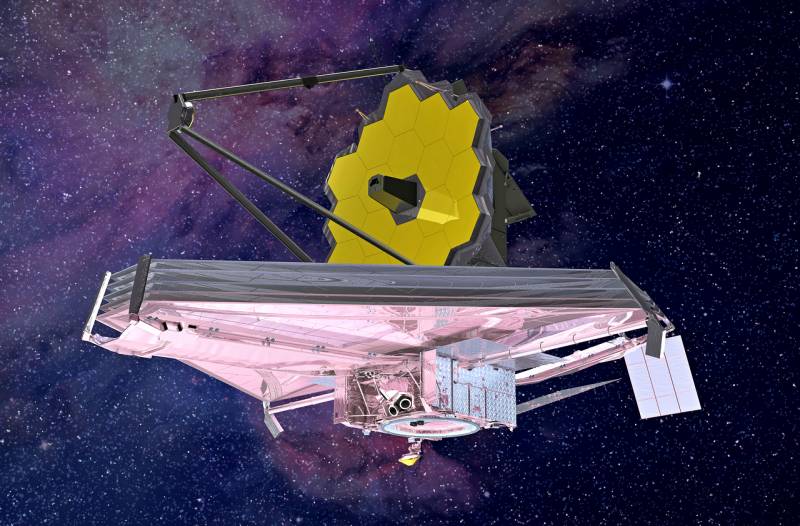 On December 25, the most expensive instrument and long-term space construction in the history of mankind, the James Webb telescope, which is called one of the most important scientific programs of our time, was launched into Earth's orbit. The telescope was built for almost a quarter of a century, about $ 10 billion was spent on it, and after numerous launch transfers it was successfully launched by the carrier rocket Ariane 5 from the Kourou cosmodrome in French Guiana.


James Webb is a joint venture between NASA, the European Space Agency (ESA) and the Canadian Space Agency (CSA). NASA invested $ 8,8 billion, ESA - $ 815 million, including the cost of the launch vehicle and launch, CSA - $ 165 million. A telescope weighing 6350 kg was created in the United States with the help of scientists from 17 countries.

After separation from the LV, the telescope independently headed for a halo orbit at the L2 Lagrange point of the Sun - Earth system. It will move there for about a month, and then it will begin to revolve around the Sun along with the Earth. It will be located at a distance of 1,5 million km from the Earth on the opposite side from the Sun. Then it will take 5 months to adjust the optics and calibrate the equipment. Only after this it will become clear whether the hopes of scientists will come true or not.

James Webb should eventually replace the Hubble Telescope, which was launched in 1990 and is scheduled to be decommissioned in 2030. The design life of the new telescope is 10 years (the coolant supply will be enough for about that much). James Webb is about 100 times more sensitive than Hubble, which operates primarily in the optical and ultraviolet ranges and orbits the Earth much closer - about 550 km - entering and exiting our planet's shadow every 90 minutes.


The diameter of the folding (composite) main mirror of James Webb is 6,5 m, it is assembled from 18 beryllium segments of a hexagonal shape, covered with a thin layer of gold (has a good reflectivity), which is much larger than that of Hubble - 2,4 m. The new telescope can operate in the infrared range, which makes it possible to study distant galaxies, making it the most powerful tool in the hands of astronomers. Scientists will be able to look into the deep past of the Universe, see the formation of the first galaxies and the light that just appeared after the so-called Big Bang of stars.

In addition, the telescope will provide an opportunity to assess whether there is life on the moons of Jupiter and Saturn, and will also look for potentially habitable planets. The new telescope will observe light sources at wavelengths from 60 to 500 microns in the infrared spectrum. It will be able to focus light at distances of over 13,5 billion years. The telescope will also investigate relatively cold exoplanets, supermassive black holes and answer some scientific questions.
Ctrl Enter
Noticed oshЫbku Highlight text and press. Ctrl + Enter
We are
What is the significance for Russia of launching the Spectra-RG?
Will the Sea Launch Save the Russian Space Industry
Reporterin Yandex News
Read Reporterin Google News
15 comments
Information
Dear reader, to leave comments on the publication, you must sign in.