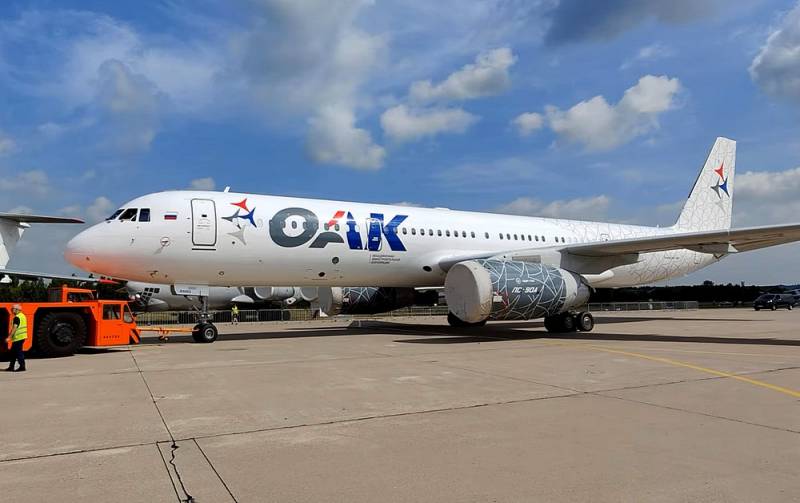 A very important event happened the day before. Officially, its first flight was successfully completed by the Russian medium-range liner MS-21 with a completely "import-substituted" composite wing. Since we already have our own PD-14 aircraft engine, all that remains is to resolve issues related to avionics and other on-board electronic equipment. After that, it will be possible to speak with confidence about the revival of the domestic civil aircraft industry, which is undoubtedly an extremely positive trend. But perhaps there is an easier way?

MC-21 is rightfully considered our “great white hope”. Thanks to the widespread use of polymer composite materials in the design of the "black wing" and tail elements, the developers managed to reduce the total weight of the aircraft and make the cabin unusually wide, which is more typical for long-haul rather than medium-haul aircraft. Depending on the configuration, MS-21 will be able to carry from 130 to 211 passengers. The Russian aircraft will turn out to be extremely successful, not only not inferior, but even superior in a number of characteristics to American, European and Chinese competitors.

It is not surprising that the United States considered it necessary from the very beginning to arrange a "hard life" for the MC-21, imposing sanctions first on the supply of imported composite materials, and then on avionics and other on-board equipment for the production of the Russian airliner. Yes, the plane, just like the Superjet, was originally planned to be produced in international cooperation. According to the initial plans, the share of Russian-made components was supposed to be only 38%, in 2014 it was increased to 50%. Then the figure of 80% began to appear, which the liner should correspond to by the time of mass production. The most daring plans for localization are supposed to bring it up to 97%.

Thus, the problem of dependence on "Western partners" made itself felt both in the short-haul Superjet and in the medium-haul MS-21. As you can see, it is gradually being solved: in a few years, domestic polymer composites were created, fortunately, work began on time on its PD-14 engine. From the fundamental points - it remains to solve the issue of on-board electronics, which may turn out to be the most difficult task of all. Undoubtedly, in the end this problem will also be solved, but all this means an inevitable prolongation of the deadlines. Could all this have been avoided?

Oddly enough, yes. And it's not even about the fact that the MS-21 should have been originally designed as completely domestic. The fact is that we already have our own medium-haul liner.

The narrow-body medium-haul liner Tu-204 made its first flight in 1989 and began operating in 1996. There are about 20 aircraft modifications: passenger, cargo, special and others. Depending on the configuration, the Tu-204/214 can carry from 142 to 215 passengers, which makes it a direct competitor to the MC-21. But, unlike a modern problematic liner, the late Soviet one already has about 50 international and Russian safety certificates and additions to them. In 2002, the aircraft Tu-204-100 No. 64011 of Siberia Airlines actually showed its reliability: having completely used up all the fuel, it managed to land safely at the Omsk airport with idle engines.

The most interesting thing about all this is that the Tu-204/214 is not only operated, but is still produced in Ulyanovsk, albeit in an extremely small batch. In other words, the production and component base has been preserved, which since the Soviet era has been focused on internal resources. So the question is, why is everyone so worried about the MS-21, when there is his classmate Tu-204/214 a long time ago?

The question is very interesting, and it can be answered in different ways.

On the one hand, critics quite rightly point out that the PS-90A engines, which the Soviet-designed liner is equipped with, are more "voracious" than the American and European ones, and even our new PD-14. For this reason, the last private airline, Red Wings, was phased out of commercial operation in 2018. Now a special squadron, the Russian Post, is flying on the Tu-204/214, and there are also plans to turn the aircraft into a military anti-submarine.

On the other hand, the production of modern economical and environmentally friendly PD-14 engines, as well as polymer composite materials that can be used to lighten the design of the wings and empennage elements. Why not apply these developments to the Tu-204/214, replacing the PS-90A with the latest generation power plants and installing new "black wings"? The technical characteristics of the late Soviet airliner will then significantly improve, it will again be able to compete on equal terms with American, European and Chinese aircraft.

There is some sense in the "renovation" of the Tu-204/214. The entire component base has been available for a long time, there is no need to invest any huge funds in a new import substitution. Manufacturers will undoubtedly be pleased with the increase in orders for the updated aircraft. Then Russia will be able to simultaneously produce both the MS-21 and the Tu-214M, unifying the power plants, a number of structural elements, which would halve its dependence on a foreign aircraft fleet and provide potential foreign customers with a greater choice. Perhaps it is worth at least thinking about it.
Reporterin Yandex News
Reporterin Yandex Zen
52 comments
Information
Dear reader, to leave comments on the publication, you must sign in.