The plane is ready: MS-21 has completed all tests 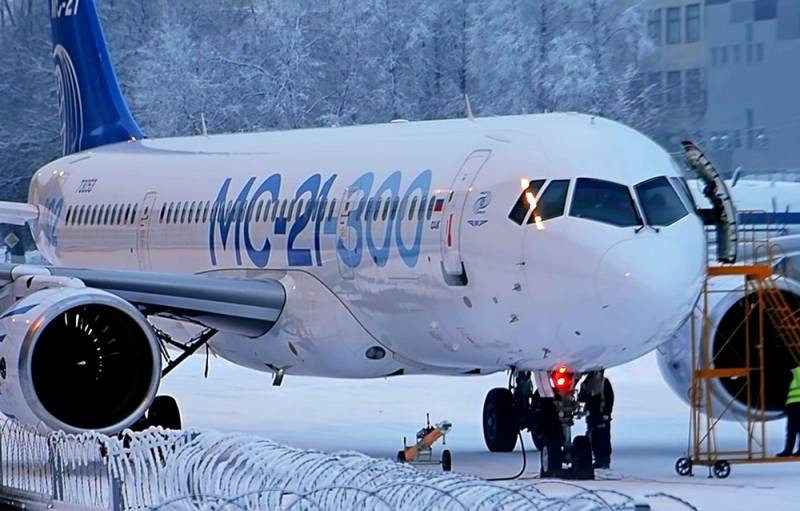 According to the Ministry of Industry and Trade of Russia, flight tests of the narrow-body MS-21 passenger aircraft developed by PJSC Irkut Corporation have been completed, and in the coming days the aircraft will fly with a Russian composite wing. This was reported by the state corporation Rostec.

We have completed the flight certification program for the MC-21 aircraft and expect to receive a type certificate in the near future.
- noted the head of the department Denis Manturov in an interview with the TV channel "Russia-24".

In the Russian Federation, they were concerned about the creation of polymer composite materials for the aircraft after the US announced sanctions against the Aerocomposite company in 2018. The company uses raw materials developed at the facilities of Rosatom with the participation of experts from Moscow State University.

After the announcement of sanctions measures, according to representatives of Rostec, the state corporation was forced to develop new materials as soon as possible. Thus, the MS-21 will fly for the first time with a Russian-made "black" wing.

Meanwhile, during the certification flights, a passenger plane flew from Moscow to Irkutsk with a range of about 4 thousand km. On board the MC-21 were the aircraft designers from the A.S. Yakovlev, part of the Irkut corporation. Thus, the specialists were personally convinced of the reliability of the flying machine.
Reporterin Yandex News
Reporterin Yandex Zen
16 comments
Information
Dear reader, to leave comments on the publication, you must sign in.