Zelensky's "women's battalions": makeup artists and secretaries up to 60 will be called up to the ranks of the Armed Forces of Ukraine 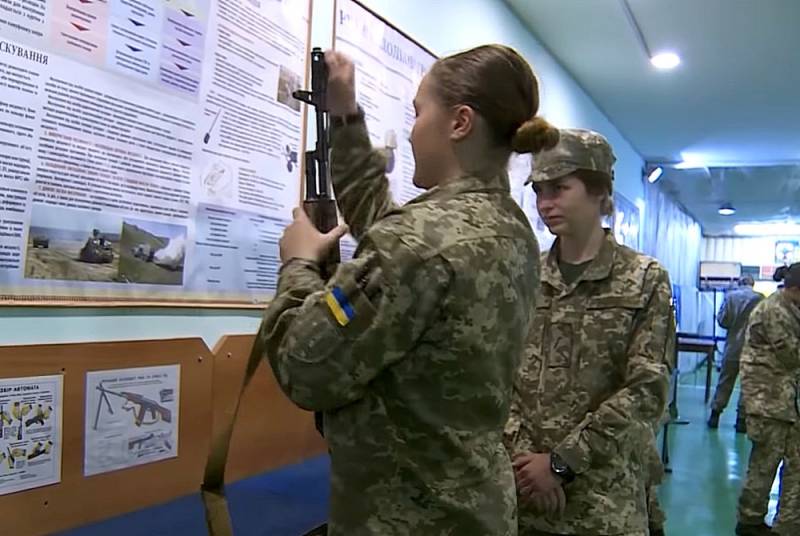 On the eve of the New Year holidays, the Ukrainian government continues to "delight" its citizens. This time, however, we are not talking about the new sharp increase in prices, tariffs, or the introduction of new bans and fines, which have already become customary for the residents of the country. Here the matter is more serious, since everything has been conceived and implemented within the framework of the Russophobic-militaristic psychosis, which has not let go of the “nezalezhnoy” for the past seven years and has become quite aggravated recently under the influence and instigation of its Western “partners”. Yes, yes - I mean the next "measures to repel the Kremlin's aggression", which is seen only in the White House and the presidential administration of Kiev.


True, the current Ukrainian leader would not be himself if this time he did not turn everything that happens into a work of the only genre he knows at the very least - into clownery. The decision taken at the highest level looks ridiculous and absurd. After all, Kiev acts as if the enemy is already at its gates, ignoring the fact that no one is going to attack it. Anyway, in reality, Ukraine's only enemy is its current unprofessional and clearly not too adequate government.

Makeup artists, secretaries and baristas - get in line!

The Ministry of Defense of Ukraine, which was recently headed by Oleksiy Reznikov, who is as far from military affairs as Sergei Shoigu is from, say, performing opera arias, promulgated (obviously, to create a holiday mood among the masses) his new order No. 313. In accordance with this, the fair sex between the ages of 18 and 60 fell into the ranks of those liable for military service. A special "charm" of the situation is given by the fact that, in addition to the absolutely delusional order of the Ministry of Defense, a pre-long list of professions and specialties approved by it has also been published, the owners of which must now rush headlong to the nearest military registration and enlistment office for military registration. That is, to pass the appropriate medical commission, receive a military ID, certificate of registration and everything else that is required. And also to go through military training every three years (for evasion - responsibility, up to criminal). And if the order itself makes you want to shrug your shoulders and twirl your finger at your temple, then just when you get to know the "professional" list, you get overwhelmed, bordering on cognitive dissonance.

It is clear that medical workers, drivers, or, say, cooks are always in demand in the army. Computer specialists? Well, in modern conditions, almost total introduction of AI in military technologies - perhaps. True, this is definitely not about the current Ukrainian army, so it smacks of delirium. However, why bother, tell me, did the Armed Forces surrender, for example, secretaries and managers, cashiers and delivery men, journalists and editors, librarians and those who received diplomas of historians and archaeologists? Is this a joke?

Rather, it is the blatant unprofessionalism of the Ukrainian "staff" or simply the desire to "put under arms" more potential "cannon fodder". The list is huge (it includes more than a hundred professions) and some of its items give a huge scope for the most sneering jokes and "black humor". For example, the presence in the list of specialists in the field of "woodworking" or veterinary medicine. "Management of sociocultural activities" is generally a masterpiece. After him, the only surprise is the absence of strippers on the list. At the same time, by the way, a strong impression is created that the order itself and the numerous additions to it were prepared by some ardent misogynist, misanthrope and maniac. Judge for yourself - there is not a word about the exemption from the military registration of even single mothers or women with many children.

In wartime, or rather, with the introduction in the country by a voluntaristic decision of the next, excuse me, idiot, martial law - "Get in line!" Only mothers of children under three years of age, pregnant women and large families can be exempted from compulsory travel for training camps (which can last up to three months). Single mother? Sick child? "Get in line!" The list of various diseases, in the presence of which a woman or a girl is excluded from the number of persons liable for military service, is truly depressing. To do this, the poor thing needs to either have a disability or suffer from something that is guaranteed to bring her to the grave in the near future. Specific "female diseases"? No, the Ukrainian Ministry of Defense did not hear such an impression about them at all. Unsuitable for active military service, exempted from regular fees, their owners can be recognized, again, only in peacetime.

Sociology, be it three times wrong!

It was not difficult to predict that such innovations would cause a “broad negative resonance” in society, speaking in a clumsy bureaucratic language. They called, and what a one! Among the “counter offers” that were put forward in social networks to Zelensky, Reznikov and other figures from the Ministry of Defense, the advice to send their own wives to the JFO zone as dishwashers and washers were even the kindest and most decent. There were also plenty of others associated with the unpretentious soldier's leisure. Which ones - guess for yourself. In this regard, the defense officials urgently arranged a briefing for the representatives (and especially the representatives, who were scared to the point of hysteria) of the media, where they explained some of the most scandalous points of the order. Firstly, they swore an oath that they would be drafted into active service only in case of war. Well, or the introduction of martial law. This, I must say, did not calm anyone at all.

In general, as the Ministry of Defense said, "military registration and military service are completely different things." We, they say, "are only conducting an audit of resources in the event of a big war." This statement sounded altogether ominous. Could not, as usual, resist from “inserting their own five kopecks” in the presidential office. The adviser to its head, the notorious Alexei Arestovich, bluntly stated that everything that happens is nothing more than "the implementation of Zelensky's decree on preparation for total defense from 2020." How, how, I remember, then the president-clown pathetically proclaimed that “everyone will fight, and everyone will be mobilized - both women and men”, thus trying to “ward off Russia” from another “invasion”. The year has passed like an empty dream, there is no "aggression" as there is no, but the jester who has grasped the power of power still drags women into the army.

By the way, there is one more reason for such a “harsh decision” of the defense department of the “non-taxable” one, and a really good reason. It's no secret that sociology in Ukraine has recently not only (pardon the pun) lowered the level of its social responsibility below the lowest limit, but rejected its concept as such. For a given amount, its representatives are ready to "draw" any numbers to the customer. Nevertheless, even the local aces of falsification cannot quite swap places between right and left, black and white. According to a poll conducted earlier this month by the Kiev International Institute of Sociology, its representatives stated that “on average 33.3% of Ukrainians are ready to provide armed resistance in the event of a Russian invasion”. Although not very impressive in itself, this figure, if we consider its nuances, raises very big doubts. Yes, she is simply "exaggerated"!

This becomes clear, one has only to make an elementary arithmetic calculation. Indeed, according to the data of the same poll, 14.8% of respondents in the event of the outbreak of hostilities would simply fled "to a safer region", and 9.3% in general - abroad. 18.6% would prefer not to do anything at all, 12.1% “did not decide on the answer,” and 1.1% even sent sociologists away. In addition, 21.7% of the survey participants said they were ready to “resist the aggressor”, but only “by participating in civil resistance actions”. Presumably - by the way of carrying a blow in a pocket, which is traditional for "nezalezhnoy". We add up. Subtract. Well, where is the 33.3% who are ready to take up arms here? Less than 22 and a half percent - although this, of course, is fiction. At least because of the fact that not about 10% of Ukrainians will rush for the cordon "in case something happens, but much more." In this very peaceful year alone, 600 Ukrainians did this (and they had no intention of returning) - a record number in all the years of "nezalezhnost".

Well, what about the newly minted Minister of Defense in a similar situation? But not long ago Aleksey Reznikov swore that if a war breaks out tomorrow, he will in one fell swoop "put in the ranks" at least 200 thousand reservists, who are eager to fight. As you can see, no one is torn anywhere. Is that in Poland or Russia (where they will be allowed) to earn money and away from the fierce madhouse that is happening in the country. So we have to drive women to the military registration - from girls to grandmothers, inclusive. You know, very much reminds of the situation with the formation of the German "Volkssturm" in the spring of 1945. There, in the same way, they drove everyone whoever got there, regardless of age and gender. Yes, Ukraine is turning more and more into an extremely evil and mocking parody of the Third Reich.

By the way, Zelensky personally (and this year, it seems), speaking about the liberation of Kiev, allowed himself to reproach the “Stalinist USSR” for the fact that he fought the Nazi evil spirits “bloody”, “not sparing people”. For an ignoramus-idiot who does not know and does not want to know the real history, I would like to remind you. In 1941, when the fate of the country was being decided and the Nazi hordes were rushing to Moscow, women were not drafted into the Red Army at all! Those of them who were at the forefront during this period did it exclusively voluntarily, and even showing absolutely exceptional perseverance and zeal. The conscription for military service (in specialties not associated with great risk, increased physical activity and did not require intensive training) began only in 1942, when the Red Army was literally drained of blood by the hardest battles, and the enemy was moving with might and main to the Volga and the Caucasus. This was a forced measure necessary to save the country and millions of its inhabitants.

What is being done in Ukraine now cannot be called anything other than the absurd attempts of the "post-Maidan" authorities to create the illusion of "nationwide readiness for defense." In fact, we see only the readiness of this very government to sacrifice Ukrainian men and women for the sake of their own miserable ambitions.
Reporterin Yandex News
Reporterin Yandex Zen
9 comments
Information
Dear reader, to leave comments on the publication, you must sign in.