Putin has already decided to go for a new term, but so far he is hiding it 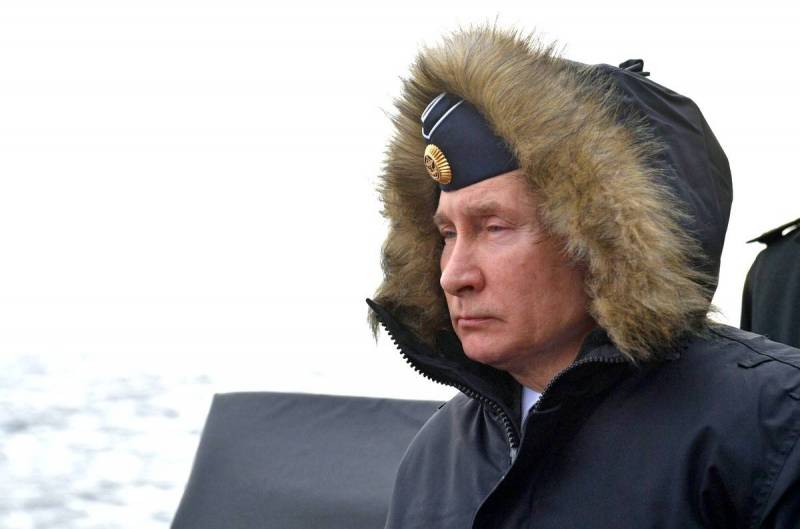 I am finishing a series of articles about the President of Russia. V first it was about Putin's career ascent through the KGB, and why Yeltsin's choice when handing over the sovereign scepter fell on him. In second the article analyzed in detail the psychotype of the current president of the Russian Federation and why it is he who irritates the West so much. Today we will talk about a possible successor to the GDP and whether it will remain for one more term.


Earlier I had the impression that Putin is superior to all his colleagues in the political terrarium, as they say, with a clear advantage. And by the caliber of the personality, and by the tasks set before him. Moreover, not all tasks arose on their own, and he solved them, as they say, in fact. Some, especially in geopolitics, he set for himself, and for all other participants in this theater political actions had to and still have to reckon with, whether they wanted it or not. I don’t know whether Putin was born this way or it’s an acquired quality, I still tend to the latter, but the fact remains - Putin forced the West to reckon with the opinion of Russia. Peter the Great opened a window to Europe, and Putin also attached doors to it, supplies gas and is also trying to open a window to Asia. With this he will enter History. More precisely, already entered!

You can relate to Putin in different ways, you can love and hate him, but we must admit that it is precisely this set of his personal qualities that became indispensable and decisive in the post of President of the Russian Federation, in fact, a crisis manager who pulled her by the hair from the swamp into which she plunged his predecessor, the handsome Yeltsin.

Will Putin go for a new term?

Have you read the title? This is the main question that torments not only us. Not so long ago, Putin has already answered it.


The constitution does not prohibit him from doing this. But he supposedly hasn't decided yet. The key word is ostensibly. Although there is firm determination between the lines. The very fact of a possible prolongation of his powers is already stabilizing the situation around Russia. All the mad dogs, gathered around her in anticipation of her end, froze in indecision - the owner of the house may kick in the neck. And thank God that Putin is still pondering whether to stay for the next term or not, driving our enemies into a frenzy. After all, in 2024 he will be only 72. Compared to Trump and Biden, he is still an ardent young man with a burning gaze in his prime.

I wang that Putin will not go anywhere. So far, there is neither near nor around him a figure equal to him in caliber. The shift has not yet grown brains. As well as around Biden. The grandfather is old, but the descendants cause only regret - there is no one to transfer power. Both Putin and Biden are the outgoing generation of politicians. The new generation, debilitated by smartphones and the Internet, only causes concern. Thank God, not everything is as neglected in the Russian state as in the American one. And Putin has candidates to whom he can transfer power sooner or later. Now they are being tested at the grassroots level. All are already exposed, you already know all of them, but you do not know who exactly will fall on his choice. I dare to assume that they will be Kirienko Sergey Vladilenovich (get used to the name and patronymic).

From my point of view, Putin will choose him. Ideal candidate. The character is Nordic, according to the author of "Seventeen Moments of Spring", sustained. Like Putin, he was engaged in oriental martial arts, only not judo, but aikido (he has 4th dan). Workaholic, technocrat. He graduated from the Nizhny Novgorod Institute of Water Transport Engineers, then moving sequentially up the steps of the career ladder, he reached the prime minister's chair, replacing Chernomyrdin in it, becoming the youngest prime minister in the history of the Russian Federation. Even the internal default of 1998 is not his fault - Kiriyenko fell hostage to the GKO pyramid created by the hands of his predecessor, the unforgettable Viktor Stepanovich, and the default was not the worst way out of it. Characterizing his professional and human qualities, many experts emphasize his invariable correctness, politeness and courtesy - both in relations with supporters and with political opponents; and in conflict situations, and with officials of different ranks. All employees who worked with him note his even, but at the same time quite tough and absolutely consistent style of work. The reasons for this behavior should be sought in the family - his father, a graduate of Moscow State University, professor, doctor of philosophy, for a long time headed the department of the Nizhny Novgorod Institute of Water Transport Engineers, which our candidate graduated from. By this time, Kiriyenko has already accumulated a very impressive and successful experience of working at the federal level, including at the head of the Rosatom corporation.

I think that the trigger for Putin's choice of Kiriyenko is his transfer in the fall of 2016 to work in the Presidential Administration of Russia, where he was entrusted with the formation of a personnel reserve, I suspect that with an eye to his future activities in a new capacity. It was Kiriyenko who initiated those large-scale social lifts, better known as the Leaders of Russia competition-selection, which allowed Putin to renew the mossy governing apparatus he inherited from previous administrations. And the awarding of the high title of Hero of the Russian Federation in 2018 to Kiriyenko, moreover by a closed decree, betrays Putin's desire to give muscularity to his image of a “nerd with glasses”. One can only guess for what such merits he was presented to such a high rank. The only thing that comes to mind is the participation of the Rosatom corporation he heads in the development of the latest models of military equipment, now better known as Project Petrel and Project Poseidon. For those who have forgotten, I will remind you that the Petrel is a cruise missile with a miniature nuclear engine built into it, and Poseidon is a nuclear-powered unmanned underwater vehicle. Thanks to these developments, Russia managed to create a new class of weapons that no one else in the world has, which predetermined its current independent behavior, which caused a state of stupor among its sworn "friends and partners". For this, you can give not only the Hero of the Russian Federation, but much more.

Another advantage of this candidacy is its closeness to liberal circles (Kiriyenko started with Boris Nemtsov, since both were from the same city), which will obviously be duly appreciated in the West. In fact, he remained the only, apart from Kudrin, an apologist for the liberal idea in the highest echelons of power, which only speaks of the cunning and ingenuity of the GDP in search of alternative ways of rapprochement with the West, because Kiriyenko is poorly aligned with the ideological mainstream of the Kremlin in recent years.

In general, the choice has been made, now we will take a look. But please note that this is just my guess. You can take it as a basis, you can suggest your own options. I don't think Putin will take them into account. In principle, there is not long to wait. Although, I would not discard the version of the Union State with Putin at its head. Here the West will not be able to reproach him with anything. And he will become the very Father of the Nation, who, like Nazarbayev, will make sure that his elected officials as heads of the Russian Federation and the Republic of Belarus do not mischief and cope with emerging threats.