Ukraine: And she only dreams of the roar of the cosmodrome ... 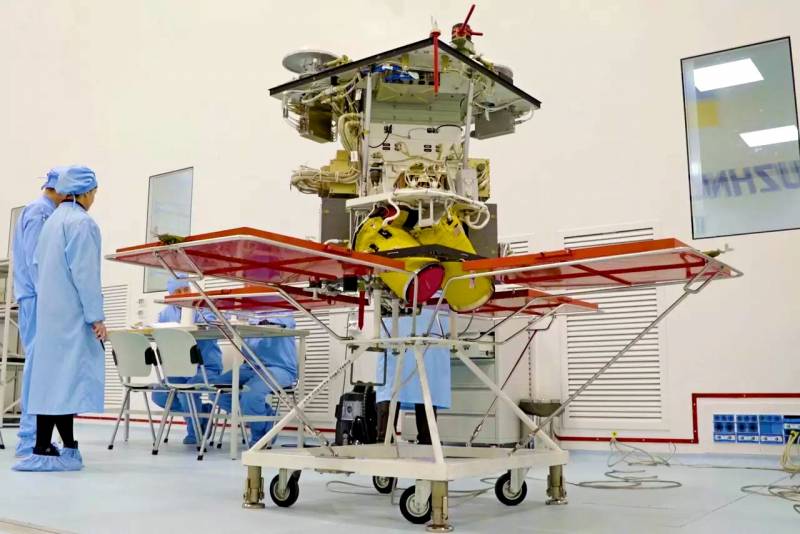 The launch of the Ukrainian satellite Sich-2-30 (pictured), which SpaceX has been promising to deliver to Earth orbit for quite some time, has once again been postponed. At least - until the beginning of next year. Thus, one of the pretentious promises of Volodymyr Zelensky will definitely remain unfulfilled - that on the tenth anniversary of the last such launch, the "nezalezhnaya" will again "be in space." Quite an ordinary, in general (from the point of view of countries that are really actively and consistently engaged in this kind of activity), the event was supposed to mark another "Ukrainian breakthrough". And it became the reason for new ridicule - as happens in the vast majority of similar cases.


Kiev's ambitious "space program" more and more deserves the name "comic", because, according to close examination and sound reasoning, it can cause nothing but laughter. This document, by the way, has not yet been approved by the local parliament, but many high-ranking officials of Ukraine love to quote whole passages from it, again, promising "grandiose peremogi". Let's try to figure out whether there is even a grain of realism in these widely declared plans and what are the chances that they will ever come true.

"Satellite constellation", which does not exist

Sha! Nobody flies anywhere ... The insidious Elon Musk struck a blow to the "young Ukrainian democracy", again refusing to load its "space brainchild" with the patriotic name "Sich" into his Falcon-9. But it was so dreamed that a new satellite would soar into the skies exactly in the year of the anniversary of the Ukrainian "non-profit" and at least a decade after the previous similar device, "Sich-2", was launched into orbit! Since then, Kiev has not had its own "representation" in the near-earth space. At first, the launch was planned for 2019. Then they pretended to be "guessing for the holiday," announcing that the flight would take place in 2021 (though not in August, but already in December). Now, the launch date was first announced on January 10, and after - on January 13, 2022. Judging by the extraordinary ease with which it shifts "to the right", it can be assumed that this is not the last transfer. And what to do?

In this situation, Ukraine plays an extremely unenviable role of the "sixth crawling". ISILAUNCH, a company from the Netherlands, is responsible for the integration and coordination of the Transporter 3 space mission, launch services are provided, as already mentioned, by SpaceX Musk, who, by and large, does not care at all - he has a private shop, not a state "office". Wants - flies, does not want - does not fly. Ukraine, which does not have its own launch vehicles and a cosmodrome, can only act as a supplicant, that is, wait as long as they say. However, it is quite possible that the problem here lies not at all in the willfulness of the "sharks of world capital", but in the prosaic, purely material plane. After all, for the launch of "Sich" Kiev has been billed with a not weak bill of $ 2 million, without any kopecks. But whether this money has been paid - in Ukraine they are somehow rather suspiciously silent.

Meanwhile, Sich-2-30, developed by Yuzhnoye KB and created by Dnepropetrovsk Yuzhmash, should become not just a "symbol of Ukraine's return to space", but the flagship of a whole satellite constellation, which it intends to create in orbit over the next five years. In any case, this is precisely what Vladimir Taftay, the head of the local State Space Agency (Goskosmos), has repeatedly stated. At the same time, the high-ranking official swore that these were not his personal ambitions and fantasies, but the "horizons" prescribed in the National Target Scientifictechnical space program for 2021-2025. True, this document, submitted to the Verkhovna Rada of Ukraine in the form of bill No. 6129, as far as we know, has not yet been considered even in specialized committees. And before accepting it, forgive the pun - as before space.

Nevertheless, Mr. Taftay, who has been in office since February of this year, beams with the most stormy optimism and continues to pour in advances - one more enticing than the other. "Sich-2-30", according to him, is a very useful and necessary thing, but applicable exclusively for peaceful purposes. But the country “reflects aggression”, don’t you forget? Therefore, the "satellite constellation" that exists so far only in the projects of the Ukrainian State Space Agency and the local developers is not insignificant. They are impatiently awaiting satellites with a higher resolution - from one to two meters to half a meter - from the Yuzhnoye Design Bureau, as well as devices for radar observation of the Earth's surface. These should be "Sich-2-M", Sich-3-V "," Sich-3-G ", well, and obviously, further alphabetically. In total, by 2025, Taftay and his subordinates threaten to "throw" seven Ukrainian satellites into orbit. True, there is one problem here - typical for non-profit.

Dunno on the Moon - Ukrainian version

The hitch in the creation of a "satellite constellation", about which both Taftay and Vladimir Zelensky himself, broadcasting about the "revival of a space power", are so enticing, lies, as you might guess, not only in Ukrainian helplessness and secondary nature in space affairs (there is no cosmodrome, there are no rockets no - throw it up to orbit, please!). The point here is also in the most banal lack of funding for such extremely expensive "Wishlist". The same satellite with the necessary, first of all, military, resolution of half a meter, will cost, according to the head of the Ukrainian State Space Agency, in the amount of 70 to 100 million dollars. At the same time, if some "stuffing" for it in the "nezalezhnoy" at the very least can still be riveted, then such important components as an optoelectronic module, solar panels and storage batteries for them will definitely have to be purchased on the side. That is - from "Western partners" and for absolutely crazy money.

No, Kiev also plans to develop its own ultra-high resolution optoelectronic system based on the Ukrainian scanner, despite the fact that the State Space Agency admits that there are no technologies for its creation in the country, as such. Here are just the announced cost of the project - 340 million hryvnia (920 million rubles) for the scanner itself and almost 2 billion hryvnia (6.7 billion rubles) for the system as a whole, raises strong doubts that it will ever be implemented. The money for Ukraine is truly overwhelming. In general, according to the same Taftay, to create a "satellite constellation" it is necessary to allocate 3 billion hryvnia (over 8 billion rubles) over five years. At the same time, he himself admits that there is no such money in the state budget (at least "for space") and is not expected.

The exit is planned "simple and elegant" - the next, pardon the rudeness, "scam" in the form of "attracting funds from private investors." What kind of investors to pigs? According to a recent study conducted by the European Business Association, the index of investment attractiveness of Ukraine in the eyes of potential "depositors" fell to 2,73 points out of 5, dropping to the "negative" level. Investors ... It was with their money that Taftay solemnly promised to send compatriots into orbit as "space tourists" already in 2030. However, this is not yet the most delusional of the Ukrainian "space" ideas. This year, the State Space Agency "nezalezhnoy" signed a number of agreements within the framework of the well-known NASA program "Artemis". The one that is aimed at exploring the Moon, exploring Mars, asteroids, comets and something else.

As far as is known, in addition to the European Space Agency, Britain, Canada, Australia, Japan, Italy and the United Arab Emirates are going to participate in this venture. Well, only there weren't enough Ukrainians there. Our country, by the way, was also invited to "Artemis", and very cordially and persistently. However, Moscow replied that it does not intend to get involved in dubious projects being implemented by a dubious company, and instead prefers to focus on space exploration together with China. It should be noted that a characteristic feature of "Artemis" is that the participating countries not only have to independently finance those of its components, for the implementation of which they undertake, but also provide NASA employees with their own projects "for consideration", presumably - with all design and technical documentation. Cunningly thought up, you won’t say anything! But Ukraine agrees to this too - if only they would take their adored “Western partners” into the company.

Representatives of the "nezalezhnoy" are ready to participate in the creation of the lunar station in those areas that are closest to them. For example, they promise to create electric generators that generate energy not only from sunlight, but also using temperature differences on the surface of the satellite. Well, of course, having such problems with gas, heat and electricity, you will inevitably learn how to extract it from the sun, even from the air ... But scientists demand one and a half hundred million to develop the above technologies - in hryvnia (406 million rubles). And also, it is highly desirable, 170 million hryvnia (half a billion rubles approximately) for the design of a satellite capable of "mapping the surface of the moon." Money, money, money .... This summer, the employees of two enterprises that can somehow still be ranked as "space" - KB "Yuzhnoye" and "Yuzhmash" have already protested against the delay in wages. By the way, Taftay refused to apply for a loan to pay off the debt, so they had to appeal directly to Zelensky. There may be money to calm the last engineers and designers who have not fled in all directions. However, hundreds of millions and billions of real projects in their implementation are unlikely.

Ukraine can blame as much as it wants for its failures and for the fact that its satellites remain chained to the ground, anyone - Ilona Mask, Russia (in general, she is always to blame for everything!) Or even little green men from the planet Plyuk. By and large, she needs to ask herself. Rather, since those politicians and other "figures" who endless "Maidans", the breakdown of relations with Moscow, theft and lawlessness have brought the country to a state where it can only rush about with unrealizable dreams of cosmic proportions. And, as the famous professor said - "cosmic stupidity."
Reporterin Yandex News
Reporterin Yandex Zen
6 comments
Information
Dear reader, to leave comments on the publication, you must sign in.