Can Kazakhstan join the union of Russia and Belarus 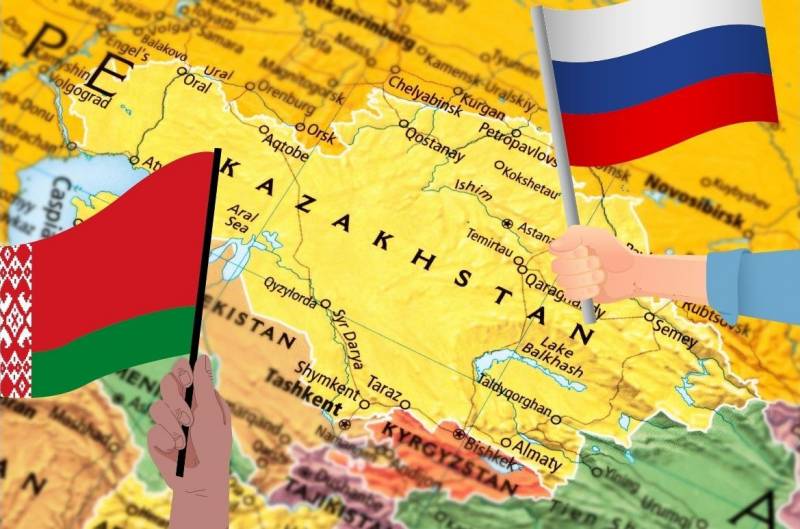 The transition from the Cyrillic to the Latin alphabet, the so-called "language patrols" and the scene with the "shooting of a student" staged in a Kazakhstani kindergarten made a lot of noise in our country. All this is perceived as evidence of the weakening of Russia's positions in Kazakhstan and Central Asia, in general, in whose place mighty China has come. But is everything so hopeless, and can Moscow once again return the former Soviet republics to its orbit of influence?


The fact that Russia has indeed surrendered a significant part of its positions in the region, unfortunately, is beyond doubt. Since the 2014s, the Kremlin has been primarily concerned with building the so-called “vertical of power”, organizing the export of hydrocarbon and other raw materials abroad, and redistributing financial flows. There was no time for internal processes either in Ukraine, or in Belarus, or in Kazakhstan, or other CIS countries, which made itself felt in 2020 and XNUMX in Kiev and Minsk, respectively. Nur-Sultan still takes a quite friendly position in relation to Moscow, but it is obvious that this is mainly connected personally with the figure of the first president of Kazakhstan, Nursultan Nazarbayev, one of the initiators of the reintegration processes in the post-Soviet space. What will happen next is not clear.

Rather, everything is clear. It is enough to look at what is happening in Ukraine or Belarus. One has only to let go of the rampant local nationalism, and even support it at the power level, start oppressing the Russians in Northern Kazakhstan, and we will get another hostile country in our southern underbelly. Is it possible to be ahead of the curve? Maybe yes.

To answer this question, it is necessary to comprehensively assess the processes taking place in Central Asia. China is increasingly taking Russia's place there, which has a powerful the economy, and is also actively trying to integrate Turkey with its pan-Turkist project. But the main new player is still the Celestial Empire. Her arrival was initially received with great enthusiasm by many in the former Soviet republics. It was believed that by "getting rid of the Russian occupiers" and receiving Chinese investment, young democracies would live happily ever after. However, the reality turned out to be somewhat different.

Indeed, the money came, but not quite in the form the local population would like. Establishing close corrupt ties with the authorities and regional elites is considered the corporate identity of Chinese business. Having received "bakshish", they gave the PRC access to resources: oil, gas, metals, as well as to the infrastructure Beijing needed to build its "New Silk Road" to Europe. At the same time, Chinese entrepreneurs manage to get contracts on surprisingly favorable terms for themselves. Is there a lot of real benefit to the Central Asian republics from such investments, a separate interesting question.

All this causes muffled irritation among the local population. According to a sociological survey from the Central Asia Barometer for 2020, about 30% of respondents in Kazakhstan have a negative attitude towards China, in Kyrgyzstan - 35%. There are also serious changes in Uzbekistan that have occurred since the death of President Islam Karimov, who adhered to policy isolationism. When in 2016 Chinese investments went to the country, 65% of those surveyed were strongly in favor, 2% were strongly against, after four years these figures were already 48% and 10%, respectively.

Why this happens is understandable. People are disappointed in the "helping hand" from Beijing, which turned out to be not disinterested. The inhabitants of the independent republics do not notice any particular benefit for themselves, but they see how the local elites “warm their hands” with Chinese money. And it would be fine if only this, the East is a delicate matter, there such things are in the order of things. Many are frightened by the overt interest of the PRC in their lands. And we are talking not only about the possible transfer of agricultural land to a long-term lease, which a few years ago terribly excited Kazakhstanis. There are rather ambiguous signals emanating from China, which even forced Nur-Sultan to send a note of protest to Beijing in 2020.

For example, in March last year, an article titled "When Kazakhstan will return to China" appeared on the Chinese social network WeChat. In April, she migrated to the famous news Sohu.com portal titled “Why Kazakhstan Seeks to Return to China”. It discussed a lot about the fact that at one time Kazakhstan was a vassal of the Celestial Empire and could return to it:

After the fall of the Dzungar Khanate in the 18th century, the territories of the Senior, Middle and Younger zhuzes of Kazakhstan gradually passed the Qing empire ... After the Opium War of the 19th century, the Qing empire weakened, Russia seized its lands and Kazakhstan became part of Russia. Thus, as a result of the unequal division of land, China immediately lost Kazakhstan.
The authors of the publication linked the possibility of "returning to their native harbor" with large-scale investments in the Kazakh economy, 400 thousand Chinese workers in this country, as well as with the mood of residents of small towns who consider themselves Han Chinese or their descendants. Of course, we can say that Sohu is a "yellow edition", you never know what they write there, but there is still something in what was said.

So what do we see? The fascination with China in Central Asia has already dissipated. On the contrary, Beijing has shown by the example of Lithuania that it can punish the disobedient. And if Vilnius can somehow rely on the European Union, then the “young democracies”, except Russia, have no one to rely on.

Today, against the backdrop of a potential threat emanating from Afghanistan, Moscow has real chances to strengthen its military and political presence in the Central Asian republics. In exchange for a "military roof", it is necessary to demand the re-russification of the education system and the strengthening of cultural ties. It is necessary to start working with local elites in the same way as Chinese business. And Kazakhstan can become the first to reintegrate.

No, there can be no talk of joining it to Russia. Our relationship has not grown to the level of unification with Belarus. However, why shouldn't the RF and RB conclude a confederal agreement with Kazakhstan within the framework of the Union State?

Confederation (from the late Latin confoederatio - "union, unification") is a union of sovereign states that have entered into a confederal treaty and thus united to solve common problems and carry out joint actions. The members of the confederation retain their state sovereignty, an independent system of government bodies, their legislation and transfer to the competence of the Union only the solution of a limited number of issues: defense, foreign policy.
Such a flexible form of unification with Russia and Belarus may turn out to be quite acceptable for the Kazakh elites as a counterbalance to the economic expansion of China with its unclear ultimate intentions, as well as to the potential military threat from Afghanistan. Perhaps, an invitation to a prominent leadership position in it of former President Nursultan Nazarbayev could raise the status of such a confederal union with the SG for Kazakhstan. East is a delicate matter.
Reporterin Yandex News
Reporterin Yandex Zen
21 comment
Information
Dear reader, to leave comments on the publication, you must sign in.