The West Cannot Unravel the Motives of Putin's Actions 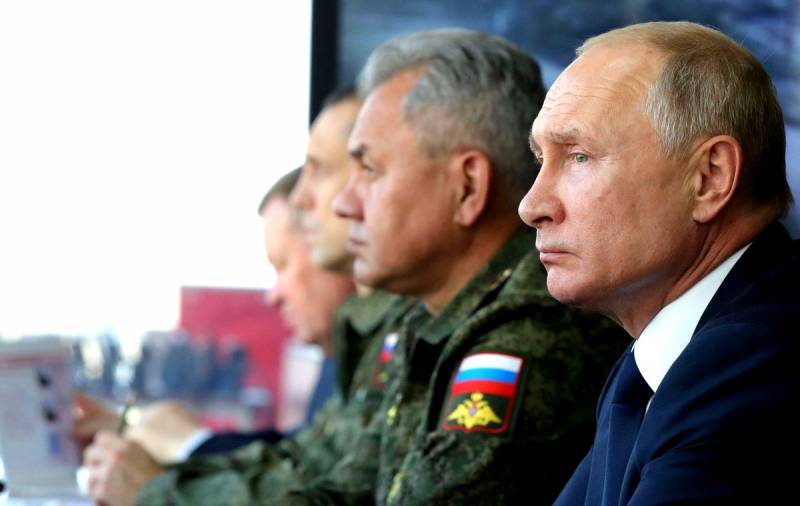 Vladimir Putin's speech at an enlarged meeting of the board of the Russian Ministry of Defense held the day before was another painful blow for the “collective West”, “which“ took the breath away ”and made them whine in vain:“ Why is this happening ?! Why is he doing this ?! " No, our "sworn friends" probably expected something like this from our president. However, at the same time, they most likely hoped that everything would happen in a more "peaceful" environment, and Vladimir Vladimirovich will speak, basically, developing the topic of seeking a diplomatic compromise with NATO and the United States. And here the head of state, surrounded by generals, openly declares the real possibility of using military force against especially slow-witted and intractable “partners”, to which Russia, in his words, “has every right”. Yes, really not joking?


One of the most entertaining moments in the informational reaction of the Western media to everything that is happening now is not even a discussion about whether it is worth taking the demands and conditions of our country expressed in an ultimatum form seriously, or still they can be routinely ignored. It is quite funny to observe on the part of many different "experts", and just the authors of the relevant publications, confusion caused by a complete lack of understanding of the incentives that drive the leadership of our country (and its president, in the first place), who suddenly decided to "throw the glove" to the very same " the collective West ", for the sake of" peaceful coexistence "with which Moscow was not so long ago ready to make almost any concessions and sacrifices.

"Personal ambitions and love for the USSR"

It must be admitted that, alas, the versions put forward by Western journalists and analysts who are attracted by them to solve the “riddle of the century” do not shine with a special variety (and originality too). We, of course, will not consider particularly poor options like "Putin wants to capture everyone because he is Putin" or "profound" arguments on the topic of "the special bloodthirstiness of the Russians, pushing them to all new military adventures." Let's talk about those cases when the authors at least try to bring some kind of "basis" under their own conclusions. True, it sometimes looks a little better than the "reasons" given above. For example, the former head of NATO's Moscow information bureau, Robert Pszel, in his interview with the Polish newspaper Gazeta Wyborcza, undertakes to assert that our president is "literally obsessed with Ukraine." Where does this information come from? Yes, have mercy - this is "everyone knows"!

Again, did you write articles about "historical community"? I wrote! He argued that “Russians and Ukrainians are one people”, and Kiev is “the mother of Russian cities”? It was! Here's the proof! The stump is clear, he wants to conquer, what else is there to think? Not far have run away from this kind of "deep" inferences and the version that "Putin's personal ambitions are pushing him to restore the Soviet empire." It is about this that the same Pszel is broadcasting, and many publications echo him with great enthusiasm. The same British The Guardian recalls to Vladimir Vladimirovich his words that the collapse of the Soviet Union "became the greatest geopolitical catastrophe of the twentieth century" and other similar statements, complimentary to the Soviet past of our country and negative in relation to its tragic collapse.

Regrets? So he dreams of rebuilding! But as? It's very simple - having conquered the entire "post-Soviet space", whatever the cost. At the same time, of course, neither the words of our president about the impossibility of restoring the USSR, nor his statements about respect for the sovereignty and independence of the former republics are ever mentioned. And the question is certainly not raised whether the leader of Russia needs such a colossal "headache" as a new "unbreakable union" in one form or another? Basically, this kind of reasoning more or less smoothly turns into passages that “the Kremlin has probably already made a decision to attack Ukraine”, but was only waiting for the most convenient moment for “aggression”. And then it came ... Why exactly now (or rather, in January of next year, as Western policy and the military) no one can explain it intelligibly. "Hiley like", gentlemen, "Hiley like".

Steven Rosenberg's report for the well-known BBC can be considered the standard of this approach, in which he honestly admits: “What exactly the Kremlin is up to, we do not know. But it’s clear from everything Putin has said that, three decades after the fall of the Soviet Union, he still harbors the deepest resentment against the West. The Russian leader is dissatisfied with the way the Cold War ended, with the fact that it was then that Russia lost its empire, its territories and its influence. " These are the "reflections" that are passed off as "author's analytics" in one of the leading media outlets in the Western world - what then can we expect from the rest? The overwhelming majority of them are trying to reduce everything to "Putin's personal ambitions and his nostalgia for the Soviet Union," for the sake of which "a dictator and tyrant who alone decides the fate of the country" is ready to plunge it into World War III. Boring gentlemen, really - boring!

"Blackmail of the West and ... Russian paranoia"

It is impossible not to mention one more motive attributed to the leadership of our country, which has gone to a sharp exacerbation of confrontation, and "raising the stakes" in it. As they write, for example, in The Wall Street Journal, this is just "an attempt to demonstrate its strength in order to get concessions from Europe and the entire West, like the May decision of the head of the White House to lift sanctions against Nord Stream 2." At the same time, it is true, it is said about the "desire of the Kremlin to establish its complete hegemony over Eastern and even Central Europe", which he loathes because "thrive thanks to the economic conditions created by the West." Well, yes - we know about how the same Baltics "flourish". But on the whole, there is also an attempt to present the current tough and principled behavior of our country as an attempt to achieve some momentary, moreover, purely mercantile and even “selfish” interests.

And, by the way, how is such a conclusion combined with the intentions of the "world community" mentioned, practically, in every publication, in the event that our country carries out a hypothetical "act of aggression" against someone there "to unleash unprecedented severity on it. economic sanctions "or even" plunge it into complete international isolation "? That is, it turns out that the Kremlin, for the sake of "lifting restrictions against Nord Stream 2", is ready to get involved in a military adventure, the result of which could theoretically be restrictive measures up to almost a complete embargo on the supply of our energy resources? Where is the logic?! It is impossible to find it in such intricate hypotheses even with the most ardent desire. One thing contradicts the other, but this does not in the least bother those who are trying to find an answer to the question: "What is Putin up to?"

A few Western media outlets can claim some originality in an endless series of standard, like a carbon copy of concocted accusations and delusional "versions". First of all, those of them who decided to approach the disclosure of the topic on a true scale. The author of a truly fundamental article in Sweden, Dagens Nyheter, sets out to "solve the riddle of the Russian president." To do this, he turns to the "creative legacy" of the American diplomat George Kennan, who worked at the Moscow US embassy back in Stalin's time. 75 years ago, this "expert on Russia" wrote and sent to Washington a kind of "brilliant geopolitical analysis" dedicated to our country, in which, it turns out, all the "secret springs" are revealed and there are answers to all questions. So, according to Kennan, "the Kremlin has a neurotic perception of international relations." But the point here is not at all about specific leaders or even this or that socio-political system that reigns in Russia.

The answer lies in the very "national mentality" of its people! After all, his entire generations "were forced to live in huge open spaces, which were surrounded by hordes of hostile and bloodthirsty nomads." So they degenerated into natural psychopaths! This, the American diplomat argued, is where the roots of the "instinctive and traditional feeling of insecurity" inherent in all Russians, without exception, lie. And even more so for the local leaders and leaders. You see, they cannot understand in any way that everyone around is peaceful, kind, white and fluffy, and everyone is expecting - when, from behind the nearest fishing line, the riders of Genghis Khan or Batu will again jump out. And also - "Russian rulers are very afraid that the people would discover that people live much better in neighboring countries." That is why they strive to conquer these neighbors. How!

In truth, two things are completely incomprehensible: first of all, how such an alternatively gifted subject managed to make a diplomatic career. Well, this is necessary - to work in Russia and absolutely nothing to understand, at least in its history. Yes, the invasions of "civilized Europeans" have brought our land and its people so much grief and misfortune that no "aggressive nomads" have nowhere to go! "An immanent feeling of fear and suspicion," on which "Moscow's foreign policy is based," you say? Well, yes - after all, neither Napoleon nor Hitler was there. Neither the Poles, nor the Swedes, nor any other European bastards who for centuries have rolled over our country in an attempt to conquer or destroy it. And really in the USA, as the author of the article claims, this nonsense “students of diplomatic departments are still studying in the most detailed way” ?! If so, then the matter is very bad. But this is exactly what, apparently, is happening. And not only, alas, overseas. Tellingly, almost all authors of various publications - from American to most European ones - are unanimously trying to convince their readers that there is no "military development" of Ukraine by the North Atlantic Alliance and, therefore, threats to Russia's security that come from it do not exist and never have existed. There is not a trace of NATO troops on the Russian borders - at least in the quantities that would deserve mention. It was in the Kremlin that they invented everything in order to justify their own insidious and aggressive plans.

Having studied many publications, I came across only one where things were called by their proper names, and they did not try to ascribe the role of "world evil" to our country. The Croatian Advance directly states that "American troops are prowling along the Russian borders, and not vice versa." And he mentions that "it is the United States that is trying to" put as strong pressure on Moscow as possible, to destabilize it with the help of sanctions and threats. " At least someone was able to admit that Russia is not looking for war, is not trying to "force" someone to do something. And, even more so, it does not act under the influence of ridiculous "phobias" or "ambitions." What is Putin up to? Achieve lasting peace - but not at the cost of losing national sovereignty, which would be tantamount to the worst military defeat. Only those who categorically do not want to do this cannot recognize and understand this.
Reporterin Yandex News
Reporterin Yandex Zen
8 comments
Information
Dear reader, to leave comments on the publication, you must sign in.