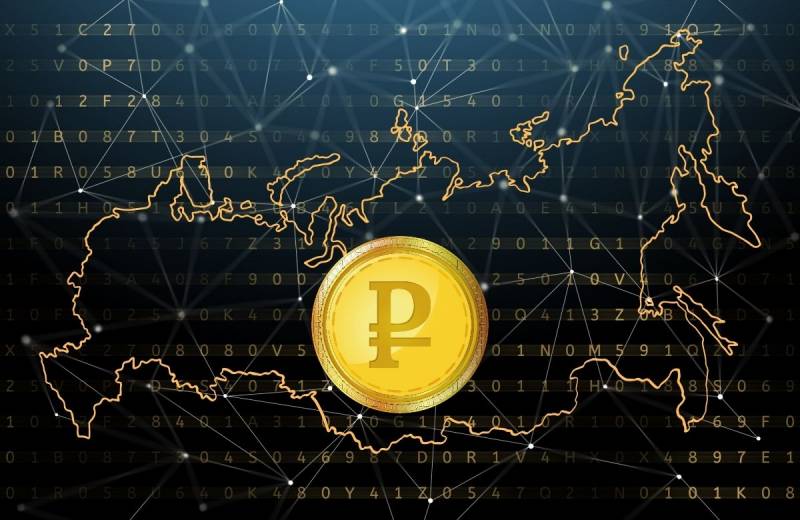 The Central Bank of Russia has prepared a prototype of the digital ruble platform and the first test operations with it will begin in January 2022. This was announced on December 20 by the first deputy chairman of the Central Bank Olga Skorobogatova.

The prototype of the digital ruble platform is ready. Immediately after the January holidays, we begin piloting the operations of the first stage with 12 banks

- noted Skorobogatova. Earlier in the media it was already reported that the testing of the digital domestic currency platform will take place in several stages over the next year.

Not "wooden", but digital


Financial experiments with digitalization of the domestic currency are not news... According to the Central Bank's advisory report on the digital ruble, published back in October 2020, the regulator is actively studying the prospects for expanding the ruble system of monetary circulation, adding to the already existing forms of existence of the domestic currency (cash and non-cash) a third - digital.

Although this is an obvious step forward in financial development, it cannot be said that everyone in Russia is enthusiastic about the prospects for a digital national currency.

I do not fully understand why this is necessary. From the initiators of the project, I hear only general words about digitalization.

- notes the deputy chairman of the board of Alfa-Bank Vladimir Senin. His bank, according to Vedomosti, is part of a pilot group for testing the digital ruble.

However, in response to this and similar comments, the first deputy chairman of the Central Bank, Sergei Shvetsov, who spoke at the XVIII International Banking Forum "Banks of Russia - XXI Century" in Sochi, only stressed that the goal of creating a digital ruble, in principle, lies outside the area of ​​interests of banks. For the rest, the advantages of the digital ruble are obvious. All settlements will be carried out at the same rates and transaction costs will be drastically reduced. As a result, the additional commission of banks for money transfers will be finally abolished, which partly explains the cool attitude of the Russian banking community to the innovation. In addition, each ruble will have a unique number, which will make it possible to fully track its movement and return money in case of theft, which, given the increased incidence of telephone and Internet fraud using social engineering methods, is also very important. For example, in April - June this year, telephone scammers stole more than 3 billion rubles from Russian bank clients, of which only 222 million (7,4%) were returned to the victims. If this money passed through a digital platform, where each ruble could be traced to the final recipient, the situation would clearly be different.

Bets have been placed, are there any more bids?

And yet, the prospects and innovativeness are good, but the introduction of the digital ruble cannot be considered in isolation from the current realities. On December 17, the Central Bank sharply raised the key rate by one percentage point at once - from 7,5 to 8,5%. The reason is clear - inflation in Russia has recently accelerated much higher than the target of four percent announced by the Central Bank for this year. The very fact of the key rate increase, predicted by the majority of financial analysts, is also understandable. Central Bank Rate Games - A Critical Monetary Management Tool policies within the fiat system. The classic pendulum: inflation accelerates - the rate rises and vice versa, in this case it swung in the direction of rising prices, so the Central Bank, as expected, reacted by tightening. Nevertheless, this time the situation is somewhat different from the crises with which the Russian economy faced in the past. And the reason for this is the fact that inflation in Russia today is "imported" in nature, i.e. primarily exported from the dollar and euro area. The United States, faced with the consequences of the pandemic, habitually floods them with money. As a result, despite the record inflation in the United States over the past thirty years, the base rate after the next Fed meeting last month was kept in the range from 0% to 0,25% per annum. That is, no one is going to stop the printing press in the USA. On the contrary, the American authorities, like pole vaulters, each time try to take new heights, as if checking how much more money can be printed? So President Joe Biden just a few days ago raised the ceiling of the American national debt again. And at once for trillions of dollars. And all of them, as before, will not be taken out of thin air, but out of our pockets. As well as from the pockets of the rest of the seven billion inhabitants of the Earth.

Russia will not be able to follow a similar path. Of course, there are always "experts" who believe that the domestic key rate is simply unreasonably high, and if you make it almost zero, like in the US or the EU, then things will go uphill. The industry will start spinning, having received cheap loans, the financial well-being of the population will begin to increase, due to the fact that there will simply be more money in the economy. Nevertheless, if today the Central Bank rate is reduced to zero, then all this will lead to is a huge jump in inflation. Just look at the example of Turkey and how the easing of monetary policy contrary to the trend affected its economy. Instead of raising the rate when prices rise, the head of the country, Recep Erdogan, according to media reports, has been actively influencing the leadership of the Turkish Central Bank for the last year, forcing it to lower the rate, despite the explosive growth of inflationary expectations. The result was not long in coming - since the beginning of this year, the Turkish lira has depreciated by more than half.

Erdogan, in his actions, obviously focuses on the developed Western countries, which thrive in the paradigm of "low rates - high GDP". The problem lies in the fact that they have it all tied to national currencies that are in demand abroad, and the Turkish lira outside Turkey is practically of no use to anyone. It does not have the status of a world reserve currency and it is not used by foreigners as a store of value (except perhaps as a subject of speculation in the Forex market). Of course, all this is a problem for Turkey, if not for one thing. A similar situation with the national currency is extremely familiar to Russia.

China, USA, India, Japan, Germany, Russia, Indonesia, Brazil, France, UK - this is the list of the top 10 economies in terms of GDP (PPP) in the world according to the IMF. Six of these countries issue money in the status of world reserve currencies. China - yuan, USA - dollar, Japan - yen, Germany and France - euro, UK - pound. The Russian ruble, in spite of the fact that the domestic economy is one third larger than the British one, does not have such a status. And the further it goes, the more it becomes obvious that it will be more and more difficult to achieve sustainable growth of the Russian economy without securing such a status.

And this is where Russia needs to use the digital ruble. But for this it is necessary that it function not within a separate sandbox platform, but be fully integrated into the Russian alternative to SWIFT - SPFS and be available for circulation outside Russia, at least within the banks connected to the system. So that any foreign citizen or institutional investor clearly knows that he can directly convert digital rubles without contacting a long chain of intermediaries and pay them around the world. Only this will make it possible to bring the Russian economy to a new level, primarily by raising the status of the ruble from the monetary unit, which accounts for tenths of a percent in international settlements, to the level of the first major state currency circulating in digital form. After all, if something is capable of making the Russian banknote a world reserve currency, then it is digitalization at a faster pace.
Ctrl Enter
Noticed oshЫbku Highlight text and press. Ctrl + Enter
We are
Defeating the Dollar - Defeating the United States: How to End the Hegemony of the American Currency
Peace enforcement operation. Russia inflicts a preemptive strike on Kiev
Reporterin Yandex News
Read Reporterin Google News
9 comments
Information
Dear reader, to leave comments on the publication, you must sign in.