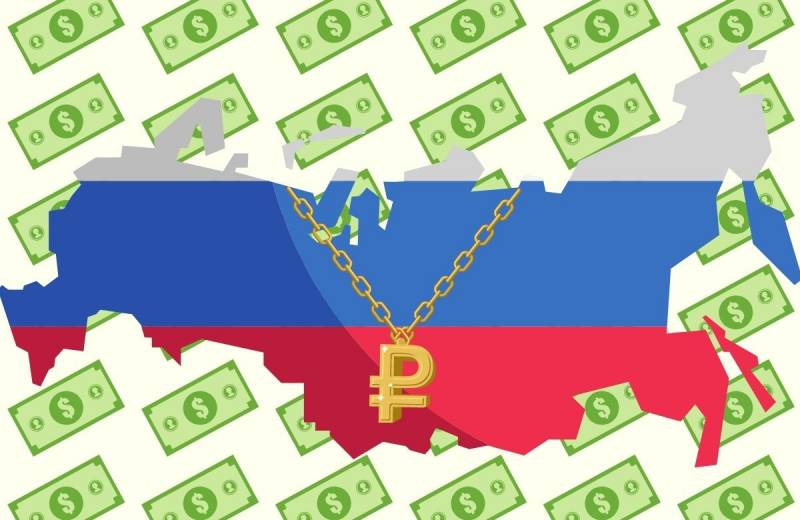 In the event of "aggression against Ukraine," the United States threatened to financially isolate Russia from the rest of the "civilized world." At the same time, Washington seems to be not ready to fight directly for Kiev, which is not surprising, especially in the recent example of Afghanistan. Instead of the "Third World Nuclear War" there will be an increase in the concentration of NATO troops on our borders and economic blockade from the West. Since the "Ukrainian problem" will still have to be addressed sooner or later, let's see how dire these future anti-Russian sanctions are.


The fact that President Joe Biden threatened his colleague Putin with financial isolation of Russia, said the press secretary of the Russian President Dmitry Peskov:

Yes, indeed, Biden said that if there is this ephemeral invasion of Ukraine - apparently, the Americans themselves have already believed that this is not information stuffing, but the true truth - then Russia will be financially isolated, and so on, and the like.
Victoria Nuland spoke about the same in the US Congress a week earlier:

What we are talking about will in fact be tantamount to complete isolation of Russia from the world financial system with all the consequences that this will entail for Russian business, the inhabitants of Russia, for their opportunities in terms of work, travel, and trade.
It sounds rather unpleasant, especially when it comes to restrictions on foreign travel and work for Russian citizens, which many immediately tried on for themselves. But let's calmly understand what exactly the Americans are threatening us with. Of the real restrictive measures that can be introduced against Russia, experts name the country's disconnection from the SWIFT system, a ban on trading in government debt bonds on the domestic market, sanctions against major Russian banks and the Direct Investment Fund, as well as a ban on free conversion of the ruble into the dollar, and other Western currencies - euros and pounds. Which of these can be applied?

We have been intimidated by the disconnection of the Russian financial system from SWIFT since 2014. SWIFT accounts for about 80% of global payments. Although it is technically a “private cooperative” registered in Belgium and subject to European law, all information flows pass through two operations centers, physically located in the United States and the Netherlands, and both have access to the United States Treasury Department. In general, this system is certainly convenient, but transparent for the American authorities. At the same time, there is already a precedent for disconnecting a number of Iranian and DPRK banks from SWIFT.

The threat of being denied access to SWIFT was quite significant in 2014, but now this sanctions train is gone. Since then, Russia has created its own analogue called SPFS (Financial Messaging System). Hundreds of credit and financial organizations and state corporations are already connected to it. Since 2019, the introduction of SPFS in India has begun, work is underway to link it with the Chinese analogue of CIPS and the Iranian SEPAM. In other words, as of the end of 2021, disconnecting Russia from SWIFT will not be a disaster, the financial market will not be paralyzed, and the United States will not be able to achieve complete isolation of our country.

The train, as we noticed, had already left. At the same time, Western partners buying Russian resources for foreign currency can make life difficult for themselves by such a step.

Ban on converting the ruble?

This measure is much more unpleasant and much more realistic. The share of the ruble in international settlements is extremely insignificant, so the West may try to forcibly make the Russian national currency inconvertible. To do this, it will be enough to prohibit American and European banks from exchanging rubles for dollars, euros and pounds sterling with the Central Bank of the Russian Federation and other Russian commercial banks.

This restrictive measure will immediately lead to a massive outflow of foreign investment, sale of assets and further weakening of the ruble. However, Washington and Brussels will not be able to completely “declassify” the Russian national currency. Domestic banks will still be able to purchase dollars and euros through third countries, for example, China. This will lead to a lengthening of the conversion chain and an increase in the cost of the process, but a total financial blockade from the West will not work either.

Rather, Moscow's financial dependence on Beijing will grow, which is hardly in the interests of Washington, which seeks to break this situational alliance between the PRC and the Russian Federation, which is undesirable for the "hegemon".

A ban on public debt transactions?

This is the most realistic sanctions measure, which will be 100% likely to be introduced in the event of "aggression against Ukraine." In the event of a ban on operations with bonds, investors will rapidly sell them, the ruble will weaken, and the Central Bank will have to flood this fire with money.

Thus, in financial terms, Russia will have to pay for the “annexation of Ukraine” with a serious devaluation of the ruble, an increase in the cost of foreign currencies for the acquisition and withdrawal from the domestic market of foreign speculators.
Reporterin Yandex News
Reporterin Yandex Zen
14 comments
Information
Dear reader, to leave comments on the publication, you must sign in.