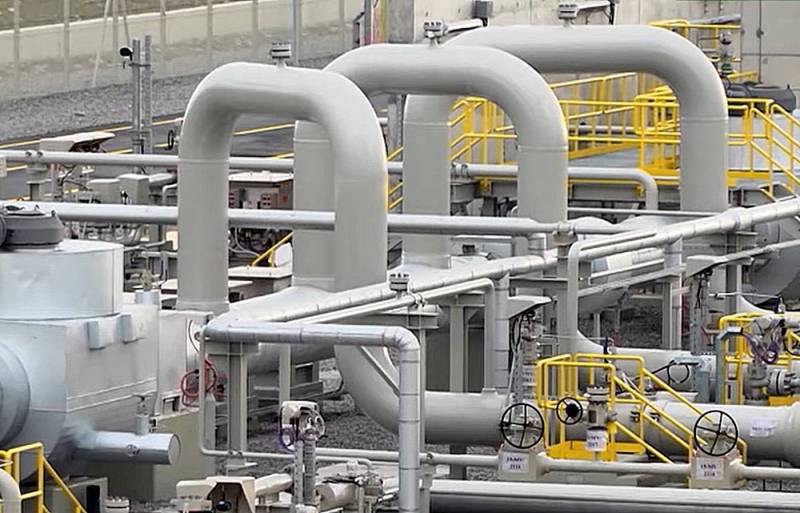 According to foreign media reports, the German Federal Network Agency Bundesnetzagentur (BNetzA) has not yet received from Gazprom all the documents necessary for the certification of Nord Stream 2. From this, Western analysts concluded that the long-suffering Russian gas pipeline will not work in the first half of 2022. But is it really that bad? Maybe it doesn't need to be launched in its original form at all, but the project itself should be conceptually revised?


Considering this topic, let's return to its origins. What was the main purpose of the construction of the Turkish Stream and Nord Stream 2? In order to get rid of Ukraine's dependence on gas transit to the countries of the European Union. The design capacity of Turkish Stream is 31,5 billion cubic meters of gas per year, and Nord Stream 2 - 55 billion cubic meters of gas per year. Did Gazprom manage to solve the problem of getting rid of dependence on the part of Kiev?

No, it failed. The principled position of the United States of America, the European Union, and Germany, in particular, is that the transit of Russian gas through the Ukrainian GTS is preserved. If Moscow can give up on Washington, then Berlin, our partner in Nord Stream and Nord Stream 2, cannot be dismissed. Germany needs to preserve the Ukrainian direction in order to continue to operate the huge Nezalezhnaya underground storage facilities, which are used to maintain the balance of the "blue fuel" reserves. Tying Gazprom to the Ukrainian pipeline was the principled position of both the former Chancellor Angela Merkel and the new one, Olaf Scholz.

The conclusion is disappointing: Russia will not be able to leave Kiev completely, they will not be allowed. The transit agreement signed at the end of 2019 for a period of 5 years seemed to be the last, but Gazprom will not be able to evade the conclusion of a new one. And no illusions about this! At the same time, there is a clear delay in the certification process for Nord Stream 2. One Polish and two Ukrainian energy companies were admitted to it, who can recall that the pipeline was completed by the Russian barge Fortuna, which was not equipped with an automatic dynamic positioning system, which was a prerequisite for the project, and therefore a lot of new problems could be created through the pipeline. It is naive and shortsighted to ignore such prospects.

But is everything really as bad as it seems? Let's look at the situation from a different angle.

On the one handYes, Nord Stream 2 is still not working, and it is not clear when it will start. Well, okay. A non-working gas pipeline is even more profitable today than an operating one. Its cost is estimated at almost 10 billion euros, half of the amount was provided by European partners, but on the terms of a loan, which, in theory, will have to be repaid. Plus, for some reason they forget to indicate investments in the construction of a gas transmission corridor from Yamal to the Baltic Sea, which, according to some sources, are estimated at $ 31 billion.

A colossal amount comes out. It would take many decades to beat it off, given that one of the two pipes will have to remain empty due to the norms of the Third Energy Package. However, against the background of the current energy crisis in the world, Gazprom will be able to earn about $ 8-9 billion by next summer. It will be possible to beat back the full cost of the project in the next couple of years, provided that abnormal gas prices in the EU remain. Paradoxically, it is more profitable for the domestic exporter not to supply gas than to supply it.

On the other hand, everything in the global the economy interconnected. High prices for energy carriers and electricity in the EU, the USA and China will lead to the so-called "import of inflation", that is, an increase in the price of industrial products purchased in these countries. However, this also opens up a certain window of opportunity for Russia. Like us told Earlier, attracted by relatively low electricity tariffs, so-called "miners" of cryptocurrencies moved to our country. Obviously not something to be proud of, but there is a certain trend.

In the context of the growing global energy crisis, inexpensive electricity is a great competitive advantage for Russia, which can be used to attract industries from countries where energy prices are setting new records. For example, from Southeast Asia, of course, subject to the provision of certain tax incentives to investors, and so on. We could make cheap electricity the main "trick", and we have everything necessary for this: NPPs, promising mini-NPP projects are being worked out, which can be built relatively quickly, we need to develop mini-hydroelectric power plants, wind farms, tidal power plants. Let energy abroad be expensive, while in our country it will be cheap, and even “green”.

Do Germans want to keep gas transit through Ukraine? Let's supply, as now, 40 billion cubic meters a year, and not more. Let the prices for "blue fuel" keep high. Are the Europeans dragging Nord Stream 2? Well, okay, let him lie at the bottom of the Baltic for a couple of years while investments fight back. Then this project can be revised altogether.

Instead of supplying gas to Europe, we will create a joint venture in Germany for the production of "blue hydrogen" and we will pump gas there purely as a raw material for this process. Then let them buy on the spot Russian-German hydrogen, which will obviously also be expensive.

If you look at the matter from this angle, then perhaps it is not necessary for the Nord Stream 2 project to take place in its original form.
Ctrl Enter
Noticed oshЫbku Highlight text and press. Ctrl + Enter
We are
Nord Stream 2 may turn into a legal long-term construction
If someone in Europe decided to freeze, Gazprom will not interfere
Reporterin Yandex News
Read Reporterin Google News
43 comments
Information
Dear reader, to leave comments on the publication, you must sign in.