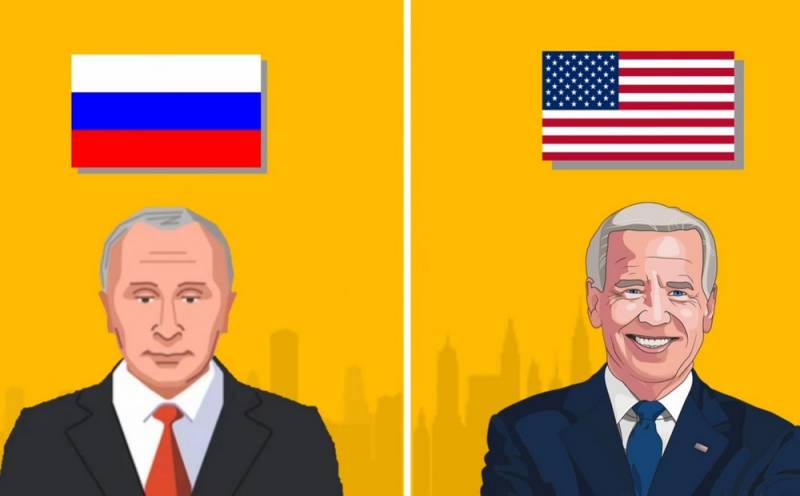 Until the summer of 2020 политическая The US line with respect to Russia was, on the one hand, to exert comprehensive pressure on the top management, high-ranking officials, deputies and oligarchs, while remaining in dialogue in the political and business spheres, on the other hand, to form a “fifth column "with the prospect of a color revolution. The goal of this political line was to completely deprive Russia of its sovereignty and finally transform it into an appendage of American corporations, preferably with the disintegration of the federation into several separate states. That is, the second aspect in the political line was leading and strategic, while the first was secondary and tactical.

However, after the defeat of the “swamp revolution”, it seems that support for the liberal opposition began to become one of the levers of all-round pressure, along with sanctions, diplomatic squabbles and support for instability on Russia's borders. Faith in the possibility of a pro-Western leadership coming to Russia was melting. And after the departure of the "poisoned" Navalny from Germany in 2020 to serve time in the Vladimir region, it became clear that the support of the "fifth column" had turned from an important element of US policy into some kind of fallback "just in case."

In 2020, the US political leadership finally realized that America's global hegemony was rapidly dying out, and it was decided that drastic measures were needed to keep the "allies" in check, rein in satellites and intimidate competitors. From a theoretical point of view, the American ruling class did not conduct any significant developments; since the 1990s, it has been firmly convinced that America is the only superpower and the "end of history" has come, that is, Western capitalism is an optimal social system, and American-style democracy is the best form of government to be “spread” in all possible ways from bribery to color revolutions and putsches. Therefore, the only solution lying on the surface was the unleashing of a new Cold War, primarily against China and against all those countries that resist American hegemony.

Trump, while in the presidency, had some glimpses of intelligence when he declared that America needed to stop waging ruinous wars on other continents and focus on solving internal problems, above all on raising production. Indeed, a sensible US strategy should be to recognize a multipolar world, retreat and regroup forces. But Trump couldn't think of it before. Moreover, as a real liberal, he decided to raise American production through protectionism, that is, the introduction of duties on Chinese goods. As a result, of course, there was not an increase in production, but a speculative inflation of stock quotes, a rise in prices and a further drop in the standard of living. When the trade war did not give a quick result, the "hawks" pushed Trump and declared a cold war on China.

In general, the cowboy approach to politics is characteristic of the American national character, when the priority is not given to analysis and comprehension, but to brute force and harsh rhetoric. Here it manifested itself in all its glory, since they have already won one cold war, it means that it is necessary to impose a second cold war and win it again.

In this situation, the role and place of Russia in the US strategic plans have changed. The priority was to draw Russia into the anti-Chinese coalition in order to put pressure on China, with which we have long borders and vast economic communication. According to the Americans, the neutrality of Russia and, moreover, the alliance of Russia with China, should by no means be allowed. Given the weakening influence of the US on the EU, this threatens the complete collapse of the "continental front".

The stake was placed not on overthrowing the "Putin regime", since it had already shown its failure, but on changing Russia's foreign policy through pressure and negotiations.

First, the United States orchestrated an attempted coup in Belarus with the aim of opening Russia's western borders and thereby making it more accommodating. Lukashenko resisted, and yet another American plan collapsed. Now the US is trying to provoke a war between Ukraine and Russia in order to be able to strengthen the "negotiating position" with Putin. If we briefly summarize the essence of the information campaign of the West, in which all possible forces are involved, from the G7 presidents, the NATO secretary general to the American media and navalnists, it boils down to begging Putin to attack Ukraine. Then, obviously, provocations from the Armed Forces of Ukraine and an attempt to drag Russia into a "trap" will follow.

The Americans have been deceiving so convincingly and for so long that Russia is almost the main aggressor and imperialist in the world that, apparently, they themselves have begun to believe that Putin is asleep and sees how to seize something.

In parallel with these rather primitive combinations, the US leadership regularly enters into negotiations with the Russian one. Despite the fact that their true content does not become public knowledge, it seems that trade is being conducted at least for the neutrality of Russia in the confrontation between the United States and China. Rather, the United States is trying to persuade Russia to take an anti-Chinese position, promising to weaken sanctions, recognize Russia's "spheres of influence", not expand NATO, not meddle in internal affairs, and so on. So far, apparently, the United States has failed, which is not surprising, given its reputation and the history of relations between our countries.

It may seem to some that the United States will never take a positive attitude towards the "Putin regime" because it is "authoritarian" and violates "human rights." All this is nonsense, because the Americans have many really cannibalistic regimes as allies and this does not bother anyone in Washington. Therefore, if Russia, at the suggestion of the United States, begins to spoil relations with China, then "suddenly" it will turn out that Putin is not such a bad leader. It is another matter that such a position of Russia is the most unlikely scenario, because the country's leadership will not agree to it and our people will not understand it. Only patented Westernizers are in favor of an alliance with the United States against China.

Patriots of a nationalist and dogmatic nature stand for the conduct of an "independent policy", for non-alignment, maneuvering and centrism in everything. But in this case, such a proud, at first glance, position can turn into an arrogant position. First, Russia's neutrality in the confrontation between the United States and China will mean support for America, support for the one who dominates now. Secondly, Russia remains an economically weak country dependent on the world market, unable to provide itself with either food, medicines, machines or technology... At the same time, our territorial location (between West and East) and place in the system of international relations (primarily the veto in the UN Security Council) will make our neutrality a factor of irritation for both sides. Trapped in isolation between two economic giants, all our advantages will turn into problems.

The most probable and competent seems to be the restrained support of China and all anti-American forces opposing the unipolar world and US hegemonism. Moreover, China itself does not impose a military alliance on Russia. The PRC's foreign policy doctrine does not imply participation in military-political blocs. This provides enough room for maneuvering so as not to fall into strong political dependence on China.

The alignment of world forces in the new Cold War is quite favorable for our country, so it is wiser to focus on solving internal problems. With every day of a new era of perturbation of international relations, it becomes clear to even the most inveterate globalists that the strength and potential of a power depend primarily on the strength of its economic rear. History has swept off the table all the idealistic concepts of the informational, postindustrial, consumer society. It turned out that the "old principles" of industrial and technological development still play a decisive role.

The hegemony of the United States is fading away, and the American ruling classes are desperately clinging to Russia to create another instability in Eurasia. They firmly know that the chaos and devastation of post-war Europe, the multi-ethnic Middle East and Africa, backward Asia, Latin America and Asia have made America "great." Therefore, in various ways, they are trying to inspire wherever their hands reach, instability and conflicts.
Reporterin Yandex News
Reporterin Yandex Zen
28 comments
Information
Dear reader, to leave comments on the publication, you must sign in.