With grenades against tanks: footage of the fearless actions of the Armenian military against the forces of Baku 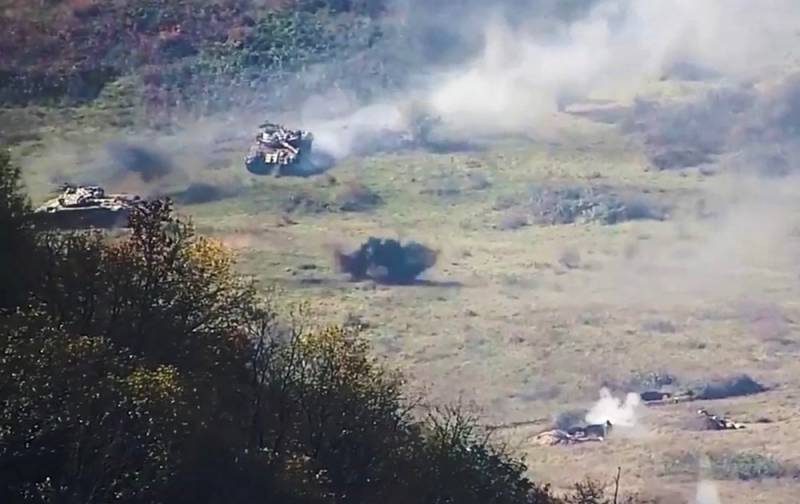 On the Web, footage appeared of how, during the last war in Nagorno-Karabakh, the entrenched Armenian infantry acted against Azerbaijani tanks. The general results of the confrontation are known. However, the video presented makes it possible not only to look at one of the episodes of what happened in this theater of operations (war in the mountains), but to confirm the thesis that tanks advancing without support become easy targets of the defenders, and the final result depends only on the luck and skill of the latter.


The footage shows how a pair of T-72AV tanks of the Azerbaijani army are unsuccessfully trying to storm the positions of the Armenian forces in the mountainous and wooded area. At the same time, the Armenian military are on a narrow and rather steep slope, firing at enemy tanks from RPGs, being in the trenches. It is very difficult for tanks to act (maneuver and aim), there is no support from infantry, armored vehicles, artillery and aviation, and they move aimlessly, exposing their sides.

The first shots of the Armenian servicemen do not reach their targets, but the Azerbaijani tankers understand that it is only a matter of time before they will be killed, since the tanks cannot "climb" the slope. After that, the tanks begin to withdraw, but a group of Armenian soldiers fearlessly rushes after the retreating forces of Baku.

The Armenians jump out of the trenches and run down the slope, carrying anti-tank hand grenades, probably RKG-3, as well as RPGs. The appearance of smoke is visible after the use of the ammunition, the flight of which was recorded by the camera, but the final result is unknown due to the surrounding dense vegetation.