Negotiations between Putin and Xi Jinping: there will be no "exchange" of Ukraine for China 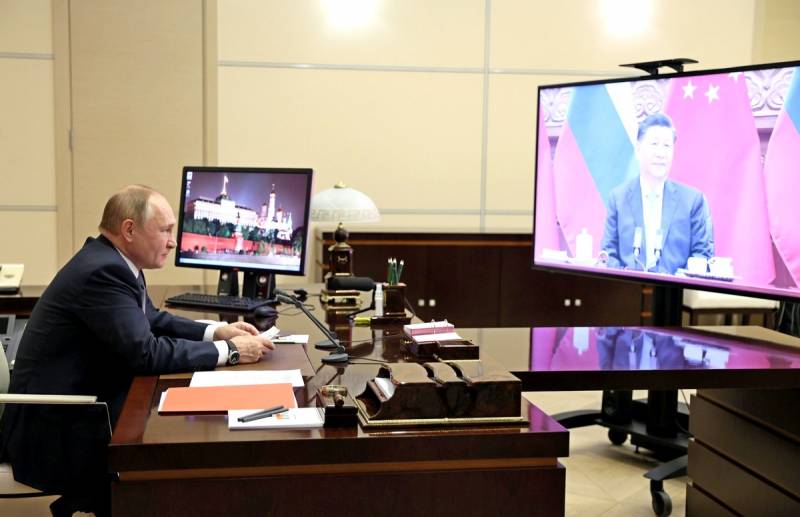 The talks held yesterday in the format of a videoconference between Russian President Vladimir Putin and Chinese leader Xi Jinping immediately became the subject of not only the closest study of political scientists and experts in the field of foreign policybut also the comparison carried out by most of them between the Russian-Chinese summit and the recent similar conversation between the "top officials" of our country and the United States. This is more than natural - and not only due to the fact that in both cases the conversation took place between the heads of the leading world powers, even if they are today at opposing geopolitical "poles."


By and large, these videoconferences may well be considered two rounds of the same negotiations, the "lines" of which converge in the Kremlin. This connection, in turn, determined the agenda and the main directions of those conversations that people who were able to decide the fate of the world had among themselves. Let's try to understand at least their main and most obvious points in order to try to understand which of the virtual meetings should be considered the main and fundamental, and which - secondary in relation to it.

There will be no "exchange" of Ukraine for China

According to Vladimir Putin, in the official video on the results of the talks posted on the Kremlin's website (by the way, after the conversation with Biden there was nothing of the kind), Russian-Chinese relations are currently at an "unprecedented high level." Can this be considered a response to all the desperate attempts of the "collective West" in any way to "drive a wedge" between Moscow and Beijing, or, at least, to achieve neutrality from our country in the unfolding confrontation with the Celestial Empire? Need to! This is exactly the meaning of what was said. Thus, the Kremlin unambiguously makes it clear (not only to the "combiners" from Washington and Brussels, but also to its Chinese partners) the futility of the attempts now being made to conduct some kind of "bargaining", in which Ukraine is assigned the role of a bargaining chip. Sorry for the rude, but very appropriate joke in this case, but "flies - separately, cutlets - separately."

“Nesalezhnaya”, of course, is also a fly - annoying, persistent and pretty spoiling the mood. But there will be no risk of not only a real deterioration in relations with China, but even a hypothetical possibility of such in order to receive from the "Western partners" ephemeral guarantees that they will have some kind of "educational impact" on Kiev or at least stop pushing it to new provocative antics. no one. Yes, the United States is literally going overboard today to focus Moscow’s attention and efforts on the “Ukrainian direction”. Karen Donfried, Assistant to the Head of the US State Department for European and Eurasian Affairs, is ringing with might and main about their readiness to “contribute in every possible way to a peaceful settlement of the situation in Donbass” by “implementing the Minsk Agreements” and reviving the “Normandy format”.

This lady flew to Moscow just on the day of negotiations between Vladimir Putin and Xi Jinping as a kind of "dove of peace" and, having met with the deputy head of the presidential administration Dmitry Kozak and the deputy head of our Foreign Ministry, Sergei Ryabkov, expounded the "invaluable initiatives" transmitted through her with the most honest air ... Approximately the same thing was broadcast (based on official information from the White House) by the US national security adviser Jay Sullivan, who, again, on the same day had a telephone conversation with Vladimir Putin's aide on international affairs, Yuri Ushakov. As you can see, Washington's pressure knows no limits. Another thing is that so far it has definitely disappeared in vain. Moreover, the words of the Americans are absolutely at odds with their deeds, and in the most cardinal way. In accordance with the promulgated new law on the admission of foreign military personnel to the territory of Ukraine in 2022, the number of exercises conducted with the participation of NATO member states will increase in it, and the number of Alliance warriors involved in these games will increase significantly. And where, after that, are the "red lines" from our president?

Incidentally, Xi Jinping said during the talks that he fully shares Moscow's concern about NATO's "advance to the East" and considers the demands put forward by it to receive firm security guarantees as fully justified. As a matter of fact, it could not be otherwise - in light of the fact that the United States is actively "military development" not only of Ukraine, but also of the same Taiwan, which is literally pumping up its weapons, and is also creating new military blocs of clearly anti-Chinese orientation. Vladimir Vladimirovich is worried about the North Atlantic alliance, comrade Xi - AUKUS, while their positions on the key issue: the rejection of the aggressive and expansionist foreign policy of the United States converge exactly 100%.

The "Pivot to the East" continues

This is expressed not only in the mutual assurances of the leaders that the West will not be able to cause discord between the states they lead and in the announcement of intentions "to turn the Russian-Chinese border into a belt of eternal good-neighborliness and peace." Moscow and Beijing also declared more serious goals - "speaking in solidarity in the international arena", to make every effort to "defend human rights and democratic values" in their "true" and not hypocritical-declarative form. This is already a direct response to the "Summit for Democracy" held not so long ago at the initiative of the current head of the White House. To such a meeting, both leaders, a priori ranked by Washington as "authoritarian", of course, were not invited. Well - the answer to this demarche has already been given, and at a "symmetrical level". In turn, Joe Biden was not invited to the upcoming Winter Olympic Games to be held in China. All Washington's talk about a "diplomatic boycott" of this sporting event looks exactly like the talk of the fox from the fable that the grapes are green. They will not go to Beijing ... Nobody wanted to see you there!

In turn, Xi Jinping once again, in the most polite terms, invited Vladimir Putin to the Games, receiving warm assurances in his presence in return. Are there any additional markers needed to understand that Moscow is prioritizing relations with Beijing, not Washington? Unlikely. At the same time, of course, the leaders could not but touch upon the specific and purely material aspects of bilateral cooperation. Russian-Chinese trade turnover is not only growing steadily, but is breaking records - contrary to some forecasts, this year it reached $ 123 billion, which by far exceeded the "pre-pandemic" level of 2019. Not every country can achieve such an achievement, but we succeeded. No less important is the development of joint projects in significant areas - for example, the localization of the production of the Sputnik vaccine in China.

Perhaps the most resonant in this area was the statement made after the meeting by Yuri Ushakov. He said that the heads of state paid special attention to the creation of some kind of financial structure that would, at least, close on itself, mutual settlements in foreign economic transactions between Moscow and Beijing, completely protecting them from the "negative influence of the West." And in general - "from any influence of third countries." In unison with this, the desire expressed by Vladimir Putin and Xi Jinping to "maximize the share of national currencies in mutual export-import operations" and to further expand investors' access to the stock markets of both countries sounded. This must be perceived, first of all, as a response to the threats recently voiced from the West “to deliver a nuclear strike on the Russian the economy"By disconnecting our country from the SWIFT system. The most interesting thing is that sane analysts in the same USA predicted that not even this step in itself, but already talks that it could be taken, "will inevitably push Moscow into the arms of Beijing, further strengthening their ties." As they looked into the water.

However, this is only one side of the issue. Let's be frank - Russia and China can defeat the battered, but still hyperactive "world hegemon" by striking really tangible blows at the most sensitive place of the United States - the dominance of the dollar in the world financial system. Before us is the first significant step in this direction? More than likely. Yes, such declarations have been voiced before, and more than once. However, something suggests that in this case the matter will not be limited to "good intentions" alone.

The West also understands this. For example, the American edition of The New York Times, one of the first to respond to the summit of Vladimir Putin and Xi Jinping, claims that "the geopolitical, military and economic partnership between Russia and China has become stronger today than ever" precisely because of the "growing confrontation of both states with the United States ". The authors of the publication believe that this alliance "is increasingly acquiring the features of a full-fledged bloc directed against the spread of American influence in the world." Well, one can only rejoice at such clairvoyance. In fact, the very fact of Russian-Chinese friendship, even without any additional formal steps, is pretty much confusing the cards for the entire “collective West”. Economic cooperation with Beijing, which is the world's first economy, actually devalues ​​most of the sanctions threats with which they are now trying to "sensitize" Russia. Even in the absence of a formal agreement on a full-fledged military alliance between our countries, there is hardly any doubt as to whether Moscow will remain on the sidelines in case of attempts to exert direct pressure on Beijing with the help of military force. The solidarity position of Russia and China on the absolute majority of international policy issues turns any attempts at their "foreign policy isolation" into a stupid and hopeless venture.

The announced intention of the two world leaders "to move forward hand in hand in order to open a new page in relations between countries" is a clear and intelligible warning to the West. The question is how its representatives, and, first of all, Washington, intend to react to this fact, which is far from positive for themselves, and cannot do anything about it.
Reporterin Yandex News
Reporterin Yandex Zen
4 comments
Information
Dear reader, to leave comments on the publication, you must sign in.