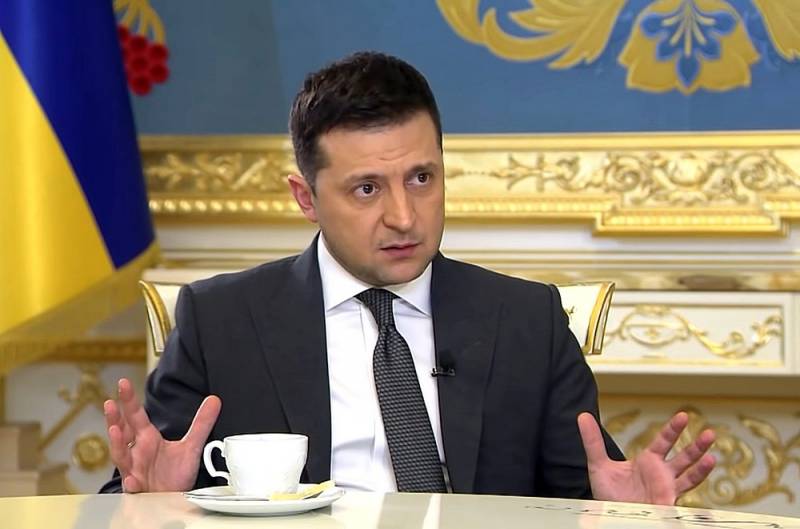 While the “collective West” amicably “rescues” Ukraine from the “military invasion of Russia” that does not exist in nature, events are taking place in this country itself that can bring down the wretched government there with such a crash that no “interventionists” invented in the State Department could even dream of it. The president of the “nezalezhnoy”, who, for some unknown reason, believed in his own omnipotence and permissiveness, managed to find himself in the epicenter of a new deafening scandal. Moreover, the current accusations against Volodymyr Zelensky and his entourage, apparently, will far surpass in their negative resonance everything that sounded earlier - the same offshore "pranks" of the presidential team seem like cute pranks and sheer nonsense against their background.


As a matter of fact, something happened that simply could not but happen. With the level of blatant corruption that covered all branches and levels of the Ukrainian state apparatus without exception, something like this was only a matter of time. And yet, the scandalous "cataclysm" that is shaking the official Kiev now has very specific reasons, due to which it has occurred precisely at the present time and in the form that we are seeing. Let's try to figure out which ones.

This is exactly how, ambiguously, with a very definite subtext, the position of that character should have sounded, from whose one ugly trick, in fact, began the "promotion" of the monstrous wave of compromising evidence, which today has already swept the very "top" of the Kiev authorities. Alexander Gogilashvili really occupied (before everything that happened) the post of deputy minister, and not just anywhere, but in the Ministry of Internal Affairs of Ukraine. In theory, his duties included "the fight against drug addiction." We will talk a little later about his “successes” and more than strange “achievements” in this field, but for now we will consider the very beginning of the current events, their starting point.

On December 11 of this year, Gogilashvili showed up at one of the checkpoints located at the entrance to the territory of the Donetsk region, and inflicted a wild blast there ... employees of his own department, who dared to try (according to the job description) to stop his car. At the same time, nine out of ten of his words, addressed to the police, were not just offensive, but completely obscene, square-line abuse, unacceptable in the mouth of a leader of this rank in principle. It just so happened that the entire disgusting scene was recorded on video (is it possible to consider both the very fact of the recording and the fact that it very quickly ended up in “the right hands - a rhetorical question) and made public on the Internet - with appropriate comments. Interior Minister Denis Monastyrsky at first mumbled something about the "official investigation", but two days later Gogilashvili was dismissed from his post. However, it was already too late - by that time, information was circulating on the Web, forcing us to ask in amazement: "How could he even be on it ?!"

This character is something unique even for "post-Maidan" Ukraine with its parliamentary speakers who have a certificate of mental illness, veterinarians as NSDC secretary and market directors as prime minister. When appointed to the highest post in one of the key law enforcement agencies of the country, Gogilashvili did not have, let alone legal, no higher education at all! Yes, from the word "absolutely". Subsequently, out of nowhere appeared two diplomas of the extremely dubious "Lviv University of Business and Law" - in jurisprudence and accounting. Obviously sold as a set. Or it was cheaper. However, all this pales before other facts. As it turned out, Gogilashvili not only lived most of his life in Rostov-on-Don, had Russian citizenship (and, according to the Federal Tax Service of Russia, has not left it to this day), but was also tried by the Rostov court for forging documents, however having got off with a suspended sentence. How could such a person end up in the chair of the Deputy Minister of Internal Affairs of Ukraine ?! Boggles the mind. However, further we finally come to his "contribution to the fight against drug addiction."

As it turned out, Gogilashvili worked in this area since the time of his residence in our country. It just happened in more than a peculiar way. According to the available completely irrefutable data, this figure had and is most directly related to such super-dangerous organizations as the Center for Healthy Youth and the International Anti-Drug Association. The "legs" of both of these "offices" originate from the Protestant neocharistic sect "Kingdom of God", which the Russian Orthodox Church opposes very sharply. Moreover, many times questions regarding the activities of these "fighters against drug addiction" have arisen from law enforcement officers.

Supplier of the "court of his presidential majesty"?

Cancer tumor "Center" has up to fifty "metastases" - the so-called "rehabilitation centers" only on the territory of Ukraine. They also exist outside of it. Within their walls, patients who landed there were systematically beaten, subjected to physical and mental abuse, unknown drugs were tested on them, which supposedly were supposed to help remove "withdrawal", but in fact put people into a state of "vegetable". Representatives of the sect also took part in all this, forcing patients to "prayers", and, in fact, subjecting them to psychological violence. In addition, far from isolated facts are known when people were forced into "centers". Against their will, in fact, committing kidnapping of citizens and unlawfully depriving them of their freedom. However, this is not all.

Soon after the publication of evidence of Gogilashvili's involvement in the illegal activities of the Center, information became public that he had repeatedly appeared in operational cases of drug trafficking! Moreover, we are talking not only about the so-called "substitution" methadone (in Ukraine banned for use), but also about much "heavier" substances. From this very place in the scandal with Gogilashvili, the most interesting began. After all, this subject got to the post of deputy minister solely due to the fact that he is married to a certain Maria Levchenko, who is an assistant to Vladimir Zelensky, and since the days of "Kvartal". Moreover, the current president of the “nezalezhnoy” at one time actively participated in the “promotion” of the “International Anti-Drug Association”, visited its “rehabilitation centers” and even starred in commercials. Also, already in his current status, Zelensky openly stated that law enforcement officers "have nothing to check there." This is the "roof" - to everyone's envy!

It is not surprising that after such "discoveries" in Ukraine, they started talking about drug use by members of the ruling team. Moreover, we are talking not only about the presidential entourage, but also about the deputies of the Servant of the People parliamentary faction. The information is openly announced that at least a dozen of them are regular users of cocaine, which is by no means a cheap drug, a gram of which costs more than $ 200 in the "non-cash". The MPs, naturally, prefer luxury goods, which are even more expensive. As the "main supplier" supplying both cocaine and cannabis not only to their fellow party members, but also to Volodymyr Zelensky himself personally, as well as his closest circle, the People's Deputy of Ukraine from the "Servant of the People" with a criminal past is called Mykola Tishchenko.

The most interesting thing is that this is not at all empty talk or idle gossip. As it turned out, the relevant operational developments were carried out by the forces of the Ukrainian Ministry of Internal Affairs even during Zelensky's election campaign. There is corresponding evidence - in the form of the results of photographs and videos. There is no doubt that all this was done on the personal initiative of the then head of the department, Arsen Avakov. The "X-Files" went to his safe, for some time becoming a reliable guarantee of maintaining his position. Now the previous "gentlemen's agreements" have been violated and Zelensky's "dirty linen" is promptly brought into the world. Presumably, not only Avakov and the president knew about the presence of this compromising material. However, only now a worthy buyer was found for him, who made an offer to the ex-minister, which he could not refuse. It is not hard to guess who exactly played this role.

Smart people warned the clown president that the conflict with the Ukrainian "oligarch No. 1" - Rinat Akhmetov, would end badly for him. Rather, it is even tragic. They also advised not to quarrel with Arsen Avakov. He, as usual, did not listen to them. But in vain. How quickly and professionally the scandal is being “promoted”, as well as the fact that from an official (albeit a rather high-ranking one) unknown to anyone until December 11, he “spread” directly to the “first person” of the state, speaks of well-planned and clearly coordinated actions. Well, Akhmetov, we must give him his due, he always knew how to attract the best to his projects and always generously paid for their work. At the same time, the stream of incriminating evidence that has now poured onto the self-confident clown is, apparently, only the first serious blow. What, then, will be the following? There is no doubt that there will be more than enough dirt that can bury not only Zelensky's hopes for the next presidential term, but even his chances of staying until the end of the current one. Moreover, the president-clown has thrown whole mountains around him - there is no need to invent anything.

What will happen next? It depends on whether Zelensky is smart enough to offer the "world" Akhmetova as soon as possible and whether the oligarch and his "colleagues in the shop" agree to it. To believe a jester is not to respect yourself. This truth has been learned by far not only within Ukraine. Those whom Zelensky has in mind “to root out as a class” may well not be satisfied with what has already been achieved - at least expecting from him later despicable revenge. And if they decide to "put the squeeze on the situation," nothing will save the would-be president. He may not count on the support of the West (rather the opposite), he is completely devoid of the "power" resource. Most likely, before us is the beginning of the end of Zelensky. At least - in the hypostasis policy.
Reporterin Yandex News
Reporterin Yandex Zen
6 comments
Information
Dear reader, to leave comments on the publication, you must sign in.