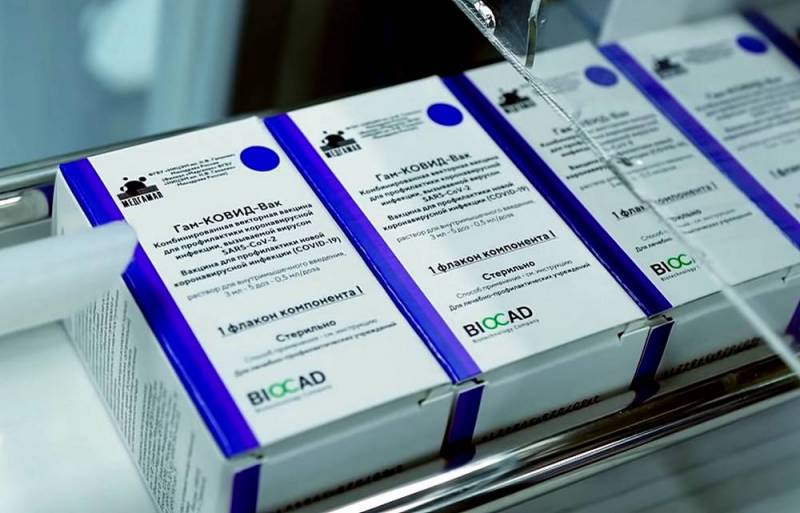 The export of Russian vaccines has set a historical record, becoming the largest in the past thirty years. On December 10, RBC reported this with reference to data published by the Federal Customs Service (FCS). In the first ten months of 2021 alone, the volume of exports of Russian drugs that pass the customs classifier as "other vaccines for humans" (which includes Sputnik V) exceeded $ 1,2 billion.


Moreover, deliveries are clearly increasing. So, it was the last month cited in the FCS statistics - October of this year - that became the peak in terms of shipments. The export of vaccines from Russia for the period from October 1 to October 31 amounted to more than $ 356 million, reaching the highest rates in the entire recent history of Russia. For comparison: in previous years, the export of Russian vaccines barely exceeded $ 70 million. And not in one month, but in a whole year.

Sputnik V has not only become the most successful Russian export drug in all the years of post-Soviet development. The speed of its development and launch into production has literally saved millions of people around the planet. People who were abandoned by the collective West to fend for themselves, because they were not born in the countries of the "Golden Billion", which means they do not deserve a vaccine.

At the same time, the very fact of creating effective world-class vaccines in Russia has caused outrage in the countries of the collective West (primarily among the Anglo-Saxons). The latter first announced the clinical lack of evidence of the effectiveness of the Russian vaccine, and then, when it became clear that this was not so, they began to promote the idea of ​​stealing the formula from Western companies. The British secret services and tabloids preferred not to mention that the effectiveness of the AstraZeneca vaccine, allegedly stolen by "Russian hackers", is much lower than that of "Sputnik V", and it was released later than it.

And yet, despite all the black PR and bureaucratic obstacles, today "Sputnik V" is approved by the regulators of more than seventy countries with a total population of four billion people, ranking second in the number of registrations in the world. And the whole world, as in 1957, is again on the lips of the mysterious Russian word "satellite", which is gradually becoming synonymous with the scientific achievements of Russia.

However, in addition to the obvious - the Russian virological genius, who gave the world not one or two, but already five different vaccines registered by the Ministry of Health, it is important to note the contribution of those involved in the distribution of domestic drugs. Indeed, like any other pharmacological product, a vaccine needs effective promotion on the world market. And behind such a stunning success of the Russian vaccine abroad is primarily the phenomenon of the Russian Direct Investment Fund (RDIF) - a sovereign investment fund of the Russian Federation, created by the government in 2011 in order to attract investment in leading companies in the fastest growing sectors of the Russian Federation. economics.

On December 10, the business publication Kommersant published a long interview with the head of RDIF Kirill Dmitriev. In it, the head of the foundation spoke about how the organization's strategy has changed in recent years and how the pandemic has affected it, and in particular the activities to promote the Russian vaccine.

The first thing we found out - the possibilities are very great, overwhelmingly great. Our export sales of Sputnik are now more than twice as large as the entire annual export of all Russian drugs.

It is important to emphasize that the deliveries of Sputnik V have not only become a textbook example of how the commercial and diplomatic sides of the issue are in perfect balance and an example for other Russian state corporations. At the same time, they allowed domestic companies to gain new experience, having received information about the real situation in the international pharmaceutical market. Moreover, the latter turned out to be extremely far from the humanitarian principles promoted by Western politicians.

But we succeeded: we returned funds with a normal profitability and at the same time saw what the pharmaceutical industry is in the world. It was a very rewarding, albeit often very unpleasant experience. (...) Earlier, when people came to us and said: “We have a drug, but big pharma doesn’t want it, it wants to destroy us,” we, frankly, considered them half-crazy. However, faced with a total intention to literally "burn out" the Russian vaccine, to prevent it from gaining a foothold in international markets, we were convinced: "Big Pharma" is not a legend, it really deliberately destroys good Technology and does it very powerfully and systematically
- emphasized the head of the fund.

The phenomenon of RDIF as a large-scale and successful state project looks especially bright against the background of the situation around Rusnano. Led by one of the architects of the voucher privatization, Anatoly Chubais, the latter was also created in 2011, but already as a result of the reorganization of the Russian Corporation of Nanotechnologies. Nevertheless, a decade after its foundation, it is forced to negotiate with creditors on debt restructuring. During the same period, RDIF investments in the domestic economy exceeded 2,1 trillion rubles, more than 90 projects were financed. Moreover, it is important to note that investments became possible as a result of strategic partnerships with leading international investors from 18 countries. That is, while some individuals and organizations withdraw funds from Russia, which is still a question of how honestly they were acquired, the fund helps to equalize the balance of financial transactions at the expense of money attracted to Russian business from abroad. But it is investments aimed at developing export potential - what RDIF does - that can provide Russia with accelerated economic development.

As the Chairman of the Accounts Chamber Alexei Kudrin noted at the plenary session of the international export forum "Made in Russia-2021" held on December 10, exports can act as a driver of the Russian economy only if its growth is maintained at the required level.

For us to use exports as a serious driver of the Russian economy (...), we must grow 5% per year in foreign trade or 15% in the export of non-primary goods and services
- he stressed.

The export of pharmaceutical products, an area in which Russia did not hold a leading position until recently, can act as an ideal springboard for the growth of the Russian presence in the non-resource sectors of the world economy. And the sale of vaccines abroad should be just the beginning. Yes, today the global pharmaceutical market is rigidly divided between large transnational corporations, primarily protecting their commercial interests, but this does not mean that their dominant position will remain forever. The example of Sputnik V and RDIF has shown both Russia itself and the whole world that domestic developments in the field of pharmacology are still competitive in the world market. And the question of their global success lies rather in the area of ​​overcoming bureaucratic obstacles of a political nature, created by other geopolitical players, and, probably, by engaged international organizations. There is no longer any doubt that breakthrough drugs can still be created in Russia.
Reporterin Yandex News
Reporterin Yandex Zen
10 comments
Information
Dear reader, to leave comments on the publication, you must sign in.