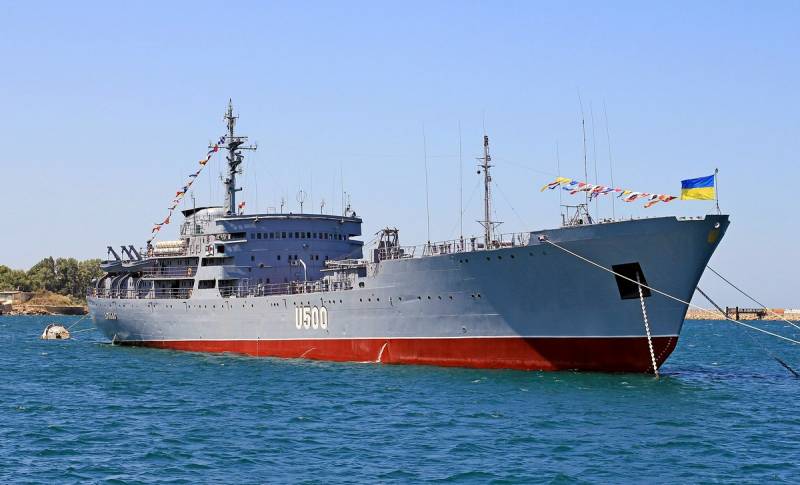 Nothing, at first glance, an unremarkable day - December 9 of this year, was marked by a number of events that should be paid special attention to. This must be done not so much because of their momentary sense, but because of the prospects and consequences to which they lead or may lead. In this case, this is not about the "Summit for Democracy" started by Joe Biden, although these "games in the sandbox" of the elderly head of the White House and his team, of course, are worth a separate discussion. Nevertheless, for Russia at the moment, the action that unfolded directly at its borders seems to be much relevant, and almost entailed another round of aggravation of the already difficult situation in the "Ukrainian direction".


The dubious maneuvers of a Ukrainian warship with the more than symbolic name Donbass in the Kerch Strait region in a strange way "coincided" with a telephone conversation between the head of the White House and Ukrainian President Volodymyr Zelensky. This does not appear to be accidental in the least. Yes, in the end everything seemed to end in nothing. But it seems to be. Most likely, what was happening had a very specific meaning, which, really, is worth pondering. Let's try to figure out which one.

Call provocation? Or "under the bell"?

First of all, in this case, it is worth, so to speak, to synchronize watches ”, based on the official chronology of two seemingly completely unrelated events of December 9th. So, according to reports from Zelensky's office, the start of telephone conversations between him and Biden was scheduled for 19.30 Kiev time (20.30 Moscow time). The conversation began exactly one hour and four minutes later, but this did not significantly change matters. One way or another, but Washington was supposed to be "on the line" with the president-clown in the evening. At the same time, according to the FSB of Russia, the command ship of the Ukrainian Navy A-500 "Donbass" withdrew from the Mariupol raid and went to the open sea at 9.12 am Moscow time. He kept the course in the direction of the Kerch Strait - despite the fact that no applications for its passage, submitted without fail to the seaport of Kerch (according to the order of the Ministry of Transport of Russia dated October 21, 2015 No. 313), were not sent.

In pursuance of the existing rules, the ship was taken to be escorted by the coast guard of the FSB Border Service, from which he was asked about further intentions, and at the same time unobtrusively reminded of the need to strictly comply with the laws and regulations in force. In response, Donbass reported that they were not going to pry into the strait at all, but simply swim as they wanted. Obviously, making exercise to improve health by breathing in the fresh sea air. Nevertheless, our border guards considered the actions of the ship's crew to pose a threat to navigation in this area and demanded a change in course. The legal demand was blatantly ignored by the Ukrainian side. The situation began to acquire an openly threatening character, a little more and it would be necessary to take the most decisive measures.

Tellingly, the "Donbass" heading straight for the Kerch Strait turned around and lay on the opposite course at the moment when there were 18 nautical miles left before. And do you know when it happened? Approximately at 22.30 Kiev time - it was only necessary to end the communication session between the presidents. Such coincidences do not exist in nature! The Donbass commander clearly received the command to return to the base after ... How what? The official message on the Zelensky website following the negotiations is a typical example of the completely indistinct and pointless verbiage characteristic of this jester and hypocrite. If you believe him, then Biden almost reported to the Ukrainian upstart on the results of negotiations with Vladimir Putin. "The key topic was the issue of Ukraine's security and the prospects for a peaceful settlement." Well, and, of course, "discussion political, financial and other ways to support the country in countering the ongoing hybrid aggression of Russia ", Well," other ways "- this is clearly the military assistance, which is so coveted in Kiev.

There is no doubt that it was her (together with the next more or less generous monetary handouts) that Zelensky begged with special force from the interlocutor. It is here that the Donbass, dangling in the Sea of ​​Azov and creating a dangerous provocative situation there, may look exclusively as a “trump card in the sleeve”, or “a means of last resort,” to which the clown was in all seriousness ready to resort to if from Washington they say to him “I'm sorry - goodbye! Further - himself ... ”But Zelensky clearly did not exclude just such an option. And the reasons for that, presumably, he had quite good reason.

For a better understanding of this situation, it is worth referring to an interview that was recently given to one of the "especially patriotic" Ukrainian media resources by the recently appointed Minister of Defense of the "nezalezhnoy" Oleksiy Reznikov. It is clear that the strategist and tactician from this retired sergeant is exactly the same as from a donkey's tail - a bayonet-knife to a machine gun. As a matter of fact, he was appointed to the post exclusively as a “zealous patriot” (that is, a Russophobe and a hater of Donbass) and an “effective manager”. Fortunately, in a variety of financial frauds and offshore deals, this "valuable frame" is involved no less than its own "commander-in-chief." Based on this, it is not surprising that in his interview Reznikov also focused on the issues of financial and logistical support of the Armed Forces of Ukraine. According to him, the money that they receive now is completely insufficient. And this despite the fact that the country's military budget this year has become a record for three decades. The trouble, according to the minister, is that 70% of these funds are spent on "consumption" and only a few crumbs for rearmament and modernization. According to him - 15-20% of the required funding.

Reznikov's appetites are impressive - he dreams not only of "modern air defense and missile defense systems", but also of "a powerful fleet, coastal defense, combat aircraft and missile weapons." Can you feel where the wind is blowing? It is clear that all of the above "non-cash", which has brought its own industry to complete squalor (including the defense industry), cannot independently produce - how much money don’t invest. To buy, again, is extremely problematic, because the numbers will instantly "be drawn" colossal. What is left?

If we talk about real options, Kiev can count on more or less modern and effective weapons only by receiving them as "sponsorship" from its "allies" in the West. Yes, the draft US defense budget, around which there has been so much noise in recent days (due to the disappearance of practically all anti-Russian sanctions from there), provides for military assistance to Ukraine in the amount of, if memory serves, $ 300 million. Sounds good, but really crumbs. And the draft budget is not “real money” yet. They may well be "frozen" for one reason or another, or they may be "provided with assistance" in such a form that it will be extremely difficult to "saw" it, or even not possible at all. This is precisely what Kiev is afraid of, on the basis that the draft of the same budget marked the refusal of the United States to pursue Nord Stream 2.

The topic for Ukraine is extremely painful, and there they start to “wang”: on the issue of “energy security” we were turned over, so why not on everything else ?! It is these fears that can push the current government of the "nezalezhnoy" to arrange the most ugly provocation in order to once again demonstrate to the world (and, first of all, to its own sponsors) the "bestial grin of Russian aggression." What is characteristic - literally on the eve of the events we are talking about, the Chief of the General Staff of the Russian Armed Forces, Valery Gerasimov, in the course of a briefing for foreign military attachés, made it quite transparent that in case of attempts to escalate in Donbass, the Armed Forces of Ukraine would run the risk of running into Seriously. Perhaps it was precisely because of this that the Kiev strategists pulled out of the dusty closet the "Kerch scenario" three years ago.

There is every reason to believe that if the conversation with the head of the White House took an undesirable or, moreover, dangerous turn for Zelensky, Donbass would rush into the Kerch Strait, forcing our border guards to use force. The Russians are attacking! And just then the President of the United States is on the wire - such a success, such a magical coincidence! A real "piano in the bushes" - and here Zelensky is at the ready, ready to play it in a known way. If this assumption is true, then we should prepare for the fact that Kiev may try to implement this kind of scheme at any time when relations with Washington seem to it reaching a "critical level" - especially in terms of military support and financial assistance.

There is, however, another version. It consists in the fact that the Donbass maneuvers, which almost turned into a full-scale military provocation, were coordinated by the representatives of Ukraine with overseas "partners". Let's remember that it was the passage of this very ship through the Kerch Strait that just preceded the “Kerch provocation” of 2018. At that time it was completed on completely legal grounds and in compliance with all the necessary formalities. It was only later revealed that an American RC-135W reconnaissance aircraft was in the immediate vicinity of the Crimea. Most likely, in this way, a reconnaissance and a "dress rehearsal" were carried out for the subsequent attempt to "break through" into our territorial waters of "Berdyansk", "Nikopol" and "Yana Kapu". Are we not dealing with similar actions in the present case? This option is, of course, even more unpleasant. In 2018, it all ended with a colossal international scandal, new sanctions and the imposition of a "partial martial law" incomprehensible to anyone. Proceedings at the UN International Tribunal for the Law of the Sea continue to this day.

How will the United States take advantage of a new similar incident, which Kiev, no doubt, will arrange at their first request? One can only guess. The fact is that, quite possibly, the "hotbed of tension" will be moved from Donbass to the Azov-Black Sea region in the near future.
Reporterin Yandex News
Reporterin Yandex Zen
8 comments
Information
Dear reader, to leave comments on the publication, you must sign in.