Ukraine helps Turkey to create the world's first aircraft carrier with drones. How did it happen? 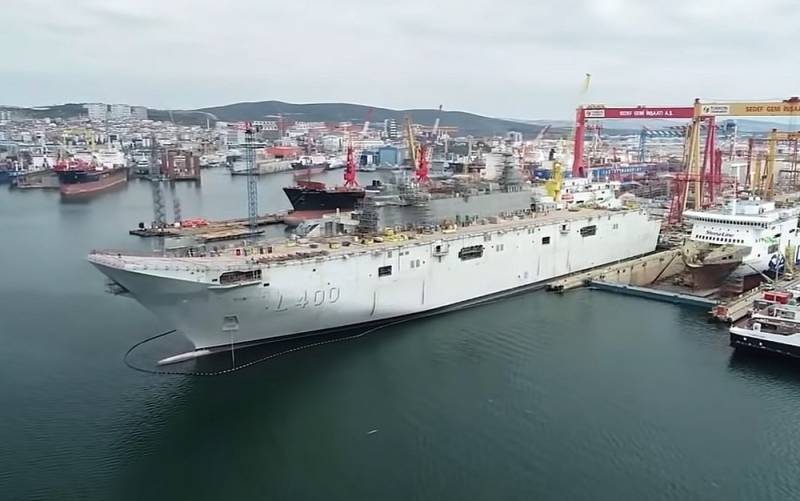 Thanks to the aggressive advertising received during the armed conflicts in Syria, Libya and Nagorno-Karabakh, Turkey is today considered one of the world leaders in the development and production of attack UAVs. In the coming years, this country has every chance of becoming the undisputed leader in the field of unmanned carrier-based aircraft, and Ukraine will help it in this. How did it happen?


Oddly enough, a breakthrough in this promising direction is largely forced for Turkey. At the same time, their own allies in the Western military alliance put the "bandwagon" on Ankara. The geopolitical ambitions of "Sultan" Erdogan are spreading very widely, from Africa to Afghanistan. At the same time, Turkey does not particularly hide the fact that they are considering the possibility of a direct military clash with another member of the North Atlantic Alliance, Greece.

It is possible that in the foreseeable future, the Turks and Greeks will again share the disputed islands in the Mediterranean with all the accompanying hydrocarbon deposits. According to President Erdogan, the Turkish Navy will need three aircraft carriers in the future. These "unnecessary" ships are needed by the "great land power" for anti-aircraft cover for the navy and support for amphibious assault forces, as well as for other operations, for example, on the African coast. Probably, realizing the prospects that such a qualitative strengthening of the Turkish Navy in this strategically important region threatens, Washington considered it necessary to interrupt this takeoff. What did he do?

Recall that the Turks have already built their first aircraft-carrying ship called TCG Anadolu (L-400). It was built according to the modernized design of the Spanish helicopter carrier-UDC "Juan Carlos I". Its total displacement is a little more than 27 thousand tons; a take-off springboard is equipped on the bow. The universal amphibious assault ship can be used for transporting marines and armored vehicles, supporting the assault force using carrier-based aircraft, and also as an anti-submarine helicopter carrier. In the right hands, this floating trough can be extremely useful.

However, the Turks are not going to stop at this UDC. President Erdogan announced plans to build the country's first real aircraft carrier. There are almost no details, but there are hints that Britain could help Turkey in this project by selling blueprints for its newest aircraft carrier, Queen Elizabeth. It is not yet known whether Ankara will build two attack aircraft carriers at once, or it will be limited to one, but will build a second UDC instead. It was here that the United States intervened in the plans of the "neo-Ottomans".

It is believed that Washington excluded Ankara from the project of the fifth generation F-35 fighter in punishment for its purchase of Russian S-400 air defense systems. But, most likely, the problem was somewhat deeper. The fact is that the Turkish Navy was counting on the American F-35B fighter as a carrier for the TCG Anadolu (L-400). The UDC can carry up to 12 F-35Bs or up to 14 helicopters. Also, if we assume that the Turkish aircraft carrier will be built according to a British project, it turns out that Queen Elizabeth and her sister ship are intended for the operation of the F-35B SCVVP. And here the United States basically deprives Ankara of access to carrier-based fighters. What to do with the already built UDC and the planned ones?

We must pay tribute to the Turks that they did not hang their noses. Left without a manned carrier-based aircraft, they relied on an unmanned aircraft. Turkey will convert its TCG Anadolu (L-400) into a so-called "drone carrier". Especially under the UDC, they began to develop a deck version of the Bayraktar TB3, which should become larger and more powerful than its land-based counterpart. It was assumed that the ship could accommodate up to 50 of them with the ability to simultaneously support up to 10 in the air. Undoubtedly, attack UAVs will become a serious help in the implementation of amphibious operations by the Turkish Navy. However, unmanned aerial vehicles are still far from the performance characteristics of fighters, and here the "Western partners" also played a role in limiting the supply of components for their production.

And then Ukraine comes on the scene, which has managed to successfully destroy almost all of its industry, with rare exceptions. This includes, in particular, aircraft engine building, which Ankara has long had an eye on. The Ukrainian enterprises Motor Sich and Ivchenko-Progress have already signed multimillion-dollar contracts for the supply of turbojet engines to Turkey. The manufacturer "Bayraktarov" has high hopes for this cooperation:

We will apply this experience when working with the AI-322F and AI-25TLT turbojet engines produced by Ivchenko-Progress and Motor Sich. This close collaboration will primarily result in a successful and high-end strategic product.
Its result will be the creation of a new generation jet UAV called MIUS. The performance characteristics of this unmanned fighter, as the Turks call it, are impressive. Having received the Ukrainian AI-322F engine, which has a thrust on afterburner of 4 kgf with a weight of only 200 kg, it will be able to climb to an altitude of 560 kilometers with a flight range of 12 hours, its speed will be more than 5 kilometers per hour, and the combat load - about 900 ton. It will be armed with air-to-ground and air-to-air missiles, effectively turning it into a fighter jet. In the future, MIUS may become supersonic. Impressive.

Note that the Turks intend to send the UAV on its first flight as early as 2023. It is planned to create a deck version of MIUS. He will take off from the springboard and land on the deck with the help of an aerofinisher. It is stated that in addition to Bayraktar TB3, the TCG Anadolu (L-400) aircraft wing will include heavier and more promising MIUS UAVs. It is likely that not only the UDC, but also the future Turkish aircraft carrier will be armed with UAVs. This means that Ankara, left without American F-35B fighters, will be the first to receive its own aircraft carrier fleet, equipped with supersonic attack drones. This direction seems to be very promising, which should be taken into account by the domestic military-industrial complex.
Reporterin Yandex News
Reporterin Yandex Zen
41 comment
Information
Dear reader, to leave comments on the publication, you must sign in.