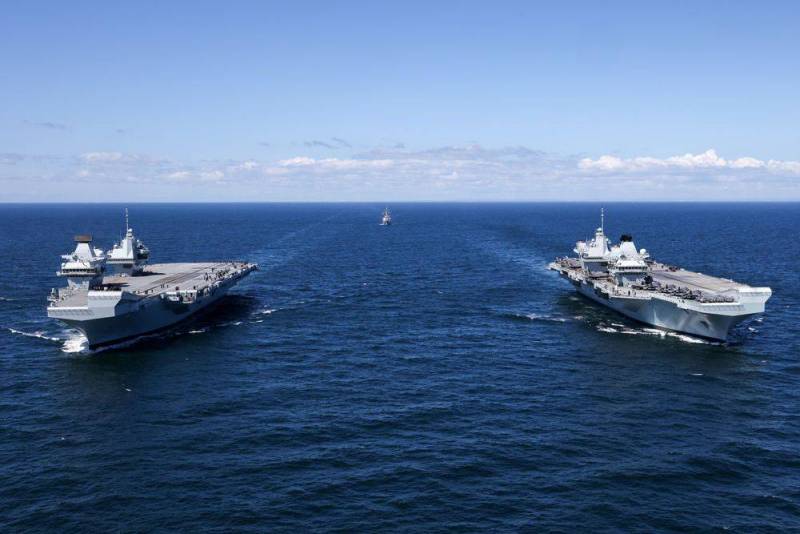 When it comes to a possible war between the United States and Russia, as a rule, arguments of varying degrees of adequacy begin about who will "glaze" whom first, we are theirs or they are us. The objective reality is that there is no need for Washington to fight directly with Moscow. It is far more rational for the Americans to put some of their own allies ahead of them, perhaps by intervening at a critical moment.


On the eastern flank of Russia is Japan with the "northern territories", and on the western - NATO. However, the North Atlantic Alliance is essentially a too loose entity, in which the overwhelming majority of its members do not need a war with Moscow at all under any sauce. For this reason, it seems that the United States has relied not on the bloc as a whole, but on one of its very specific members, a long-proven ally and “accomplice” smeared in blood, Great Britain.

Yes, the Americans quite deliberately surrendered Ukraine to the British in "fiefdom". The British military are already building military bases in this country for their needs, the local media write that up to 600 special forces can go to Independent against the Russians at any time. Lived. It is obvious that Washington is deliberately pushing London to clash with Moscow. Direct evidence of this is the provocation perpetrated by Her Majesty's destroyer "Defender" in the territorial waters of Crimea. But how did it happen that Great Britain from the "mistress of the seas" turned into a servant of Uncle Sam?

At first glance, this is really strange. The United Kingdom emerged from World War II with the status of a victorious country. Despite the fact that the Germans thoroughly battered the "Grand Fleet", the British were able to restore its power and strength with a huge effort. Combat operations at sea have proved that the time of battleships is running out, and the era of aircraft-carrying ships is coming, the effectiveness of which is immeasurably higher. During World War II, Great Britain was able to build four ships of the "Illustrious class" at once, entering the closed club of aircraft carrier powers.

However, after the end of the war, a new stage began in the history of the Royal Navy, which can be called a gradual degradation. The lead ship of the Illastries series was scrapped in 1956, a year earlier the same fate befell its brother, the Indomiteable. The third in the Formideble series was sawed for scrap in 1953. Longest of all, until 1969, held out the famous "Victoriez", which participated in the destruction of the German "Bismarck".

During World War II, two more British aircraft carriers were laid down, known as the Audacious class, later renamed the Eagle class: the ships Odeshes and the Arc Royal. They were disposed of in 1978 and 1979, respectively. At the same time, it is believed that the last two aircraft carriers were quite suitable, could serve for many more years. Why were they dealt with, as with Soviet TAVRKs in the young "democratic" Russian Federation?

It is believed that the change in attitudes towards the Royal Navy was associated with the coming to power of the Laborites, led by Prime Minister Harold Wilson. The island state, according to the updated military doctrine, was to fight in Europe against the USSR, which in itself sounds rather strange, given the traditionally small and relatively weak British army. The local "Americanophiles" in fact proclaimed Great Britain a "great land power", which, of course, does not need aircraft carriers. They scrapped first the Victorieuse, then the Eagle, then the Arc Royal. Only the light "Hermes" remained from the old guard, which was turned into a helicopter carrier.

To replace the aircraft carriers, the Laborites gave the go-ahead for Invincible class anti-submarine helicopter-carrying cruisers, of which three were built. Their main task was to fight the Soviet nuclear submarines. True, they were modernized, which made it possible to use them as light aircraft carriers, receiving vertical take-off and landing Harrier fighters. It is clear that the functionality of the British has fallen sharply in comparison with the American aircraft carriers. There is no doubt that London later more than once regretted their decision to actually abandon full-fledged carrier-based aircraft when they had to take part in the Falklands War, which the British won with great difficulty.

All three anti-submarine ships were decommissioned and scrapped in Turkey between 2005 and 2014. Instead, the United Kingdom laid down and built two Queen Elizabeth-class aircraft carriers that were finally going to be real. But they didn't. Why did it happen?

Frankly speaking, behind this whole history of controlled degradation of the British and then the Russian fleet, the hand of "Uncle Sam" is clearly traced, which categorically does not need real rivals in the World Ocean. Even the last two aircraft carriers of the Queen Elizabeth class cannot be considered full-fledged aircraft carriers due to the lack of launching catapults on them. The British found money for huge ships, but for some reason they did not have enough money for catapults. As a result, both KVMS aircraft carriers are equipped with American F-35B short takeoff and vertical landing aircraft, which are significantly inferior in tactical and technical characteristics to horizontal takeoff fighters. In addition, being carried away at one time by the Harriers, the United Kingdom ruined the school for training its deck pilots. Imagine, currently all F-35B pilots on British aircraft carriers are American military personnel.

In other words, here and now the British do not have their own carrier-based aircraft yet, they still need to be trained, and the fighters must be purchased from the United States. And it is in Washington, not London, that ultimately decide whether to take off the F-35B or not. Add to this that the nuclear submarines of the Royal Navy are armed with American Tomahawk cruise missiles, Harpoon anti-ship missiles and Trident II ICBMs. This, so to speak, completes the picture of the dependence of the former "mistress of the seas" on Uncle Sam.
Reporterin Yandex News
Reporterin Yandex Zen
8 comments
Information
Dear reader, to leave comments on the publication, you must sign in.