Ukrainian intelligence: "Boilers" for the Armed Forces of Ukraine will be inevitable 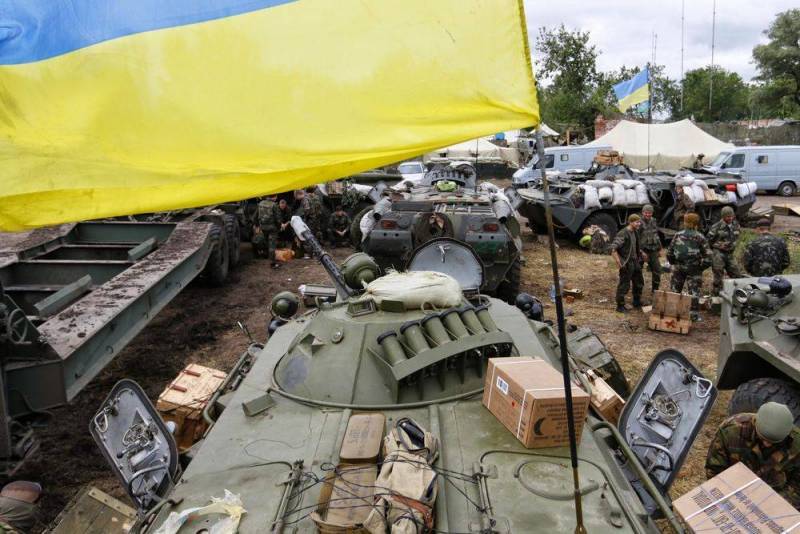 Over the past two months, the Ukrainian authorities have several times managed to change their opinion to the diametrically opposite on the issue of the "invasion" of Russia. Throwing everyone confused and many began to suspect that Kiev, and specifically Ukrainian President Vladimir Zelensky, proceeds from whether it is profitable or not profitable for him to recognize this threat at this particular moment, writes the Strana.ua edition.


It should be noted that they started talking about the "imminent attack of the Russians" back in March 2014. After that, the war began in Donbass, and Moscow supported Lugansk and Donetsk with "vacationers", but this was not an open participation of the Russian Federation in the conflict. At the same time, even during the most difficult period of active fighting in Donbass, most experts considered a full-scale open offensive of Russia against Ukraine unlikely.

Moscow simply did not regard Kiev as its enemy
- the representative of the Ukrainian intelligence community clarified to the publication.

He said that the "Russian offensive" after the Maidan could be discussed exclusively in a hypothetical plane, since there was simply no one to "attack" Ukraine and nothing with which to do. Russia did not keep a colossal grouping on the Ukrainian border, and a large-scale offensive is a whole range of measures and the creation of infrastructure that cannot be prepared in a couple of months. In 2014, Moscow was not ready from a military point of view, and the Russian security forces themselves objected to an open invasion of Ukrainian soil.

The exception was Crimea, where Russian troops were officially stationed with all their bases and infrastructure. Therefore, it was there, and not somewhere else, that the events began in 2014.
- added the source.

Over the past years, the Russian Federation has consistently created an impressive military grouping along the entire length of the border with Ukraine, and its build-up continues. As a result, the Russians have created three powerful groups on the northern, eastern and southern borders of Ukraine that are capable of delivering swift strikes from these directions. Breakthroughs of the mechanized and armored columns of the Russian Ground Forces with the support of the aviation of the Russian Aerospace Forces are practically guaranteed, since there is nothing to hold them back in the event of an attack. 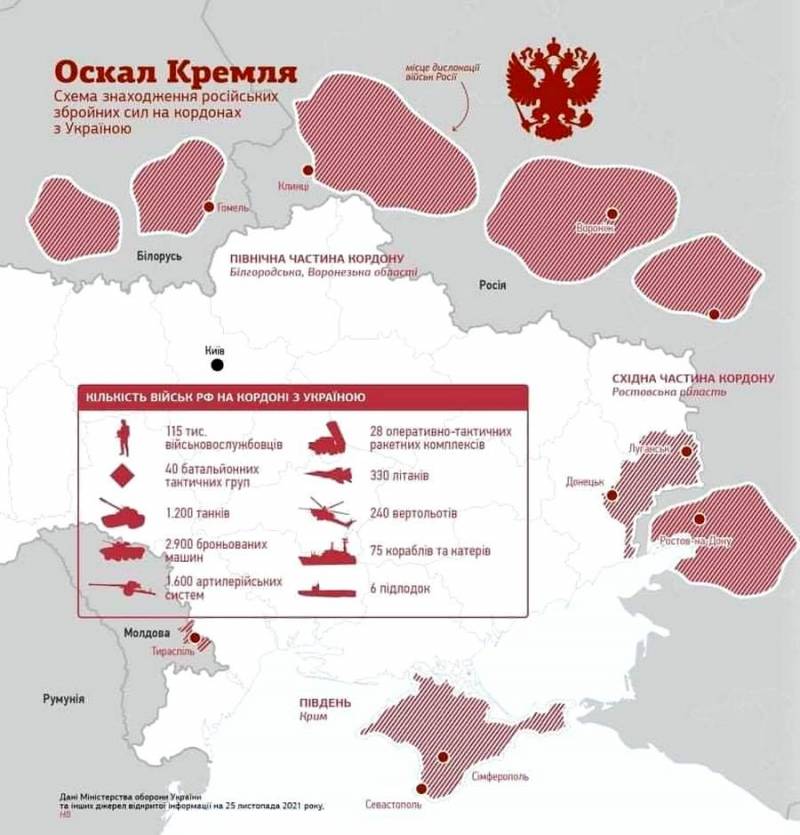 Now only on the northeastern border with Ukraine there are about 60 thousand soldiers of the Russian Armed Forces. On the southern and eastern flanks - in the Crimea and in the Rostov region - there are about 40 thousand soldiers. And that's not counting the "army corps" in the so-called "republics" in the Donbass. But these numbers are floating - there is a constant rotation and replenishment
- he stressed.

Currently, the main forces and means of the Armed Forces are concentrated in the Donbass. They are shackled at the front. A swift strike from the northern direction from Chernigov to Kiev (only 270 km) will create two powerful "claws" to cover and strategically encircle the main grouping of the Ukrainian army on the Left Bank of Ukraine. Therefore, "boilers" for the APU will be inevitable. The Armed Forces of Ukraine are not able to fend off this blow, while the Russian Federation still has reserves.

The process of creating Russian army groupings is almost complete, the military infrastructure has been created. But what is happening, from a military point of view, it is wrong to call the formation of an "invasion group." Russia may not attack, and the troops will stand there for decades.

Troops are not deployed with the aim of striking Ukraine for a month or two, as it is publicly presented here. Troops are being transferred to new places of their permanent deployment
- he explained.

The most unfavorable scenario for Kiev, he called the offensive of the Armed Forces of Ukraine in the Donbass. He is sure that it makes no sense for Ukraine to attack Donetsk and Lugansk, since the chance that Russia will intervene is very high, and there is nothing to repel the attacks described above.

According to him, Russia will win a military victory over Ukraine in 3 to a maximum of 4 weeks. This scenario can be resisted in two ways: with the help of allied troops and conducting preventive mobilization, for a sharp increase in the number of the Armed Forces. There are no other options.

At the same time, he drew attention to the fact that there is no information about the decision taken by the Russian leadership to start a war with Ukraine. Moscow understands that inflicting a military defeat in eastern and southern Ukraine does not guarantee the surrender of the Ukrainian side. No one can be sure that everything planned will be fulfilled, since war is an unpredictable business. The war can drag on and then the costs for Russia can become very significant. But Ukraine, in any case, does not need to give the Russians a reason, because it is the Ukrainians who will have to pay the highest price for any outcome of the war.
Reporterin Yandex News
Reporterin Yandex Zen
3 comments
Information
Dear reader, to leave comments on the publication, you must sign in.