What prevents the Kremlin from deciding on a war with Ukraine 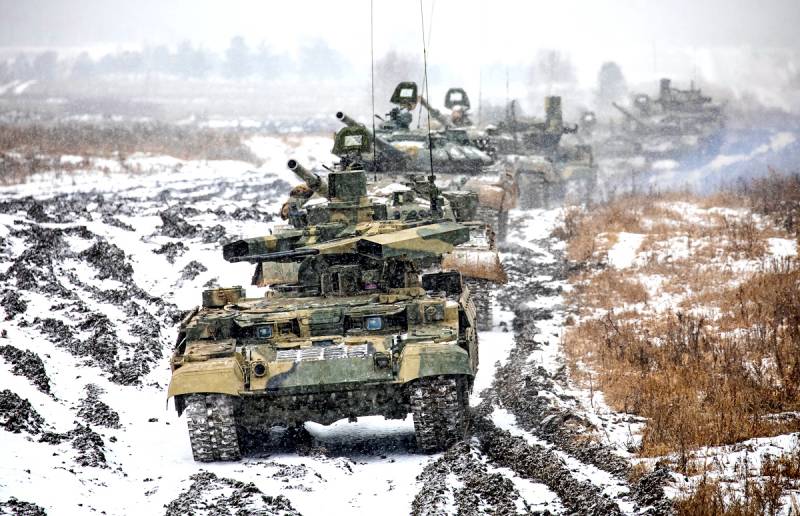 Western journalists were sent a new training manual with the thesis that Russia is gathering forces to attack Ukraine. An information campaign has begun, the goal of which, however, is not to prevent war, but to fan the hysteria of the "Russian threat".


The Minsk agreements have reached a hopeless impasse, which is recognized by everyone except the leadership of the signatory states. The participants in the Minsk Dialogue continue to insist on the observance of the agreements, accuse each other of their violations, and call for the development of the Minsk format. The other day, Erdogan once again tried to intervene in the stalemate by offering his intermediary services, and was naturally ignored by the Kremlin.

The Minsk agreements have no prospects for implementation in the current situation for the following reasons. The plan of Russian diplomacy was to sign agreements that would become the basis for ending the civil war in Donbass when Ukraine's political leadership changes from pro-Western to pro-Russian. Since this change did not take place, they stalled. The agreements themselves do not reflect either the interests of the people of Donbass, who will never return to the rule of the puppet Kiev government, or the interests of international forces that control the Ukrainian leadership. The latter went to the signing of the Minsk agreements only for reasons of public relations, in order to "prove" that the West is for peace and not for war. Whereas in reality both the United States and Germany are interested in the maximum destabilization of Russia's western borders. Thus, the one who determines the political course of Kiev. If pro-Russian forces came to power in Ukraine, the conditions of “Minsk” would be realized, which would be a victory for Russian diplomacy. In the meantime, the Minsk agreements serve as a cover for American fascism in Ukraine. The people of Donbass have become a victim of these political games, since their will is expressed by the desire for the region to become part of Russia, which, obviously, is recognized by the Kremlin as inexpedient.

This whole situation is clear enough, therefore, fertile soil is being created for the next information campaign against Russia, which is supposedly preparing a power scenario.

According to the Western press, the aim of the Russian aggression is to "break the deadlock in the Minsk agreements" and establish a regime loyal to Moscow in Ukraine. As you can see, these goals themselves are indeed visible in Russia's foreign policy, but this does not mean that in order to achieve them, Russia will move from diplomacy and dialogue to war. Western journalists do not bother to motivate the change of non-violent methods to violent ones; they have long ago made aggression, war and Russia synonymous in propaganda.

The reason for the deployment of the next information attack was the statements of V.V. Putin on the "military development of the territory of Ukraine." Say, since the President of Russia is worried about this issue, it means that the Russians are preparing a military campaign.

The Western press cites the following facts and considerations as arguments.

First, Russia has radically changed the political situation in several conflicts with the help of military force. We are talking about the aggression of Georgia in 2008, the lightning-fast operation in Crimea in 2014, the support of the LPNR in the war with the Armed Forces of Ukraine and the civil war in Syria. Everywhere there is a high-quality political result of the use of military forces. These facts, according to Western journalists, indicate that Russia is not only effective, but also concentrated, organized and suddenly using force to solve political problems.

Secondly, the use of military force by Russia did not provoke the intervention of the United States and Europe, and their international consequences did not undermine either the economic or political situation of the country. The internal political situation and economy The Russians are quite stable, which automatically means for the Western press that the Russians are ready for war. Since there is no devastation and chaos in the country, it means that there are no restraints for external aggression.

Thirdly, the Western press itself admits that the strengthening of NATO's military infrastructure on Russia's borders threatens to violate the strategic parity of forces, and therefore becomes a factor in unleashing a new war.

The scenario of the conflict in the West is seen something like this: the Russian army, with complete air supremacy, with a sudden blow dismembers the Armed Forces of Ukraine, encircles some of the groups, and presses some of them against the Dnieper, along which the front line is stabilized. Capturing Kiev, Russia proclaims a new Ukrainian state. Thus, there will be two Ukraine on the political map of the world: pro-Western and pro-Russian.

It is easy to see that all this “analytics” is a product of Cold War thinking, a concentration of phobias and the implantation of a mythological image of Russia as an aggressor.

The NATO secretary general willingly joined the information campaign, declaring that the alliance was ready for Russia's invasion. However, at the same time, he recalled that "a close and valuable partner" Ukraine is not a NATO member, therefore "we must understand the difference ...". Stoltenberg threatened Russia with "heavy economic and political sanctions" in the event of an attack on Ukraine. What is this if not an attempt to provoke a war?

The co-ordination of the press and the military bureaucracy suggests that the situation is gradually moving out of the framework of information strengthening of the image of an external enemy. Now the United States is experiencing an acute crisis of the loss of world hegemony, and they see the prospect of maintaining their positions primarily in the weakening of their main competitors. Therefore, it is likely that the Armed Forces of Ukraine and fascist gangs on the borders of the LPR will receive the command to organize a major military provocation. And the information campaign in this case will serve as a preliminary processing of public opinion before the next round of conflict.

A liberal-oriented reader may say: "What if Russia really plans to solve the problem of Donbass and Ukraine by military means, is pulling up troops to attack the Armed Forces of Ukraine, and the West is only reflecting on this?" The fact is that a war, even the smallest and most victorious, in the East of Ukraine is unprofitable for the political leadership of Russia, it is beneficial for the United States. There are absolutely no arguments in favor of the scenario proposed by Western journalists, other than the liberals' favorite postulate about the "muscularity" of the Putin regime. Their whole concept is based on extreme subjectivity and phobias.

Moreover, Russia's foreign policy is generally not offensive in nature, there is not a single story in which a constructive, strategic line of behavior aimed at the formation of something long-term and sustainable is visible. Modern Russia always and everywhere only reacts to external threats, responds to aggression and intervenes in situations set by others when non-intervention threatens with large losses. Forcing Georgia to peace in 2008 was a consequence of the need to protect Tskhinvali. The annexation of Crimea was a consequence of the fear of losing the Black Sea Fleet base. The support of the LDNR became a forced decision due to the powerful rise of patriotism and the desire of the Russian people to defend the anti-fascist uprising in the Donbass and somehow maintain their influence in Ukraine. Moreover, it is very moderate and restrained. Intervention in the civil war in Syria was driven by Assad's requests and fear of the revitalization of Islamism in Russia. Intervention in the Nagorno-Karabakh war took place only after the complete defeat of the Armenian forces and is rather passive. In all these situations, it was not Russia that “played combinations” in the international arena, it only reacted to the actions of external forces.

Even the construction of the Nord Stream cannot be considered a fully constructive and strategic solution, because the construction of a gas pipeline under the sea bypassing a couple of countries can hardly be called a long-term solution to the problem. But what if tomorrow more hostile to Russia forces come to power in Germany, the "stream" pulls to Denmark?

But even if we assume that the war can quickly and easily achieve the goal and solve the tasks of Russia in Ukraine, the losses and consequences of the conflict for the ruling strata will clearly exceed the gains. The passivity of Russia's foreign policy is not dictated at all by the weakness or indecision of the country's political leadership, but by the pressure on it from the business community, which is not at all delighted with the confrontation between Russia and the West. A full-scale war will call into question most of the economic ties with Western countries, and since we have a market economy, private interests prevail, insofar as it is dependent on the world market both in terms of supply and sales. This means that business will support the war only when the benefits from it will exceed the loss of markets. To wage a war in a country with a market economy without the support of business means knowingly provoking a political crisis.
Reporterin Yandex News
Reporterin Yandex Zen
44 comments
Information
Dear reader, to leave comments on the publication, you must sign in.