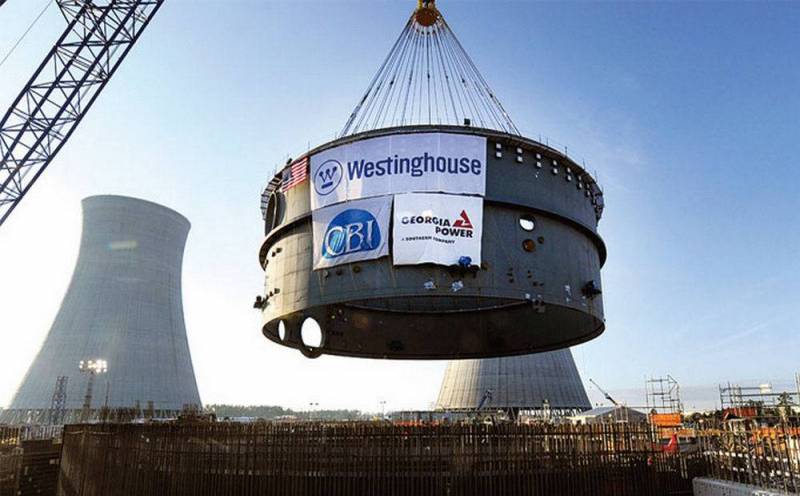 While there is a lively debate in Europe as to whether nuclear energy can be classified as a "clean" method of generating electricity acceptable for a "civilized society" their quantity. All that is happening is the embodiment of the memorandums that were signed by the president of the "nezalezhnaya" Volodymyr Zelensky during his recent visit to Washington with the Westinghouse company. Contrary to the forecasts of skeptics, the agreements reached then did not remain at the level of declarations and "good intentions", but are being implemented, and at an accelerated pace.


There is nothing to be surprised at - the Americans need a new field of activity literally like air. As for Ukraine, the question of what the cooperation with Westinghouse will result in (and, in fact, the transfer of all its nuclear energy under its control) is rather controversial. As for Russia, in this case, our country will not only suffer unequivocal material losses, and very tangible ones, but, above all, risk getting at its side a number of objects that are potential sources of the most dangerous man-made disasters. Why is this not at all an exaggeration, but just a statement of an extremely unpleasant fact? Let's try to figure it out.

A brutal war for the "peaceful atom"

It's no secret that Ukraine, especially recently, is the arena of a rather tough confrontation between American and Russian nuclear scientists. It should be noted that there is something to fight for - in terms of the number of operating nuclear reactors, the "nezalezhnaya" is considered the fifth country in Europe and the tenth in the whole world. Initially, the position of our country in this vast and very attractive market for exploitation seemed practically unshakable. Indeed, of the available one and a half dozen Ukrainian power units, a dozen were built and launched back in the USSR, and the other three, although they were put into operation after its collapse, were created according to the same Soviet technology, the legal successor of which has rightfully become Rosatom. Accordingly, until 2011, the domestic TVEL company provided 100% of Kiev's needs for fuel for nuclear power plants.

However, serious attempts to "move" our nuclear scientists were undertaken by their overseas competitors back in 2008, after the first Ukrainian "Maidan", when the puppet of Washington, Viktor Yushchenko, was in the post of president. It was then in Kiev that they started talking about "diversification", under the pretext of which Westinghouse Electric Company managed to break into the local market. Another "great success" for the "nezalezhnoy" was the conclusion with another American corporation - "Holtec International" of an agreement on the construction of a centralized storage facility for spent nuclear fuel in the country. Be that as it may, the "victory" at Westinghouse did not celebrate for long - the fuel assemblies supplied by it for the VVER-1000 reactor of the South Ukrainian NPP turned out to be of extremely low quality, moreover, their incompatibility with the reactors into which they were tried to be crammed was revealed.

It was because of this that Ukraine was forced to return to the operation of Russian TVELs, which until 2015 remained the main source of energy for its nuclear power plants. Nevertheless, after the second "Maidan", which finally transformed the "nezalezhnaya" into a vicious "anti-Russia", it was obvious that the final break with our atomic scientists was only a matter of time. This process was somewhat slowed down by the fact that Westinghouse, which at the end of 2014 signed an agreement with representatives of the "new government" on a sharp increase in the volume of exports of its fuel assemblies, three years later, management and owners. Nevertheless, already in 2018, resourceful American guys managed to grab almost half of the Ukrainian “nuclear market” from our TVEL. To be absolutely precise, 46% of that. It was evident from everything that the hour of the final battle was approaching. And so it seems to have struck.

The whole point here is that the absolute majority of nuclear reactors "non-railway" are on the verge of the maximum permissible operating life. Starting from 2023, at least one power unit will have to be removed from it (in 2025, for example, three at once). The last of the currently operating reactors must be shut down no later than 2030-2037. Ukraine, which does not have its own serious reserves of fossil energy resources, clearly did not intend to abandon nuclear generation - it has been about the construction of 11 new units there since 2006. They were to be erected by Rosatom, but alas ... The corresponding agreements were denounced by Kiev in 2016. The topic of "atomic electrification of the whole country", as they say, was hanging in the air, but then, quite expectedly, the Americans hurried in advance, who had been marching for this final and irrevocable victory for so long.

What should we build a reactor?

And so, the ice, as they say, has broken. After the memorandums signed in Washington in August, we now have a very specific agreement concluded this week by the Ukrainian Energoatom and the American Westinghouse. It no longer includes general phrases about good intentions, but quite specific objects - two new power units for the Khmelnytsky nuclear power plant, which are being undertaken by overseas contractors. And from this place such a "thick fog" begins that it is extremely problematic to understand it, separating the truth from the most shameless lies and outright fraud. First of all, it should be mentioned that, of course, the impoverished “nezalezhnoy” has no money for the implementation of such an expensive project. According to reports, the US Eximbank is ready to provide a loan for construction. It seems to be about the amount of 10 billion dollars, and this is extremely strange, since initially one reactor was estimated at this amount, not two! How to explain this riddle?

There is a strong suspicion that Westinghouse is corny trying to "sell" its equipment to Kiev, which "hung" after the American company had problems with the construction of the VC Summer NPP and Vogtle NPP in the United States. At the same time, the words of the current head of "Energoatom" Pyotr Kotin, which sounded during the presentation of the new project, which, by the way, took place within the framework of the international conference "Atomic Opportunities for the Development of the Country", cause great surprise. This figure, praising "dear American partners", suddenly announced that the new power units would be ... "Ukrainian, designed on the basis of Westinghouse AP1000 reactors." What is this nonsense? What are the "Ukrainian power units", where will they suddenly come from? One gets the impression that in this way Energoatom is really trying to "legitimize" the installation of problematic American equipment at the Khmelnitsky NPP with a substantial "discount".

The trouble is that the AR1000 reactors, as such, have a lot of the most unpleasant questions. Let us remind you that the Chinese, who unfortunately contacted Westinghouse, discovered a huge number of dangerous problems and critical flaws in this equipment, gave the company a savory kick, and undertook to "bring to mind" the power units somehow made by the Americans on their own. This reactor did not (and does not cause) delight among regulators in the USA itself - it was not for nothing that the company had a lot of problems that ended in its bankruptcy. Nevertheless, the Washington administration, for which Westinghouse, among other things, is an instrument of “squeezing out” Russia's nuclear scientists both from the countries of the “post-Soviet space” and from Eastern Europe, is trying to prevent its final collapse.

In this case, Ukraine provides an excellent opportunity to "kill two birds with one stone" - both to spoil our country in the most fair way, and Westinghouse to improve their affairs, "without bothering" with such completely optional (if we are talking about some natives there) things like quality and safety. And if this is really the case, then Russia has more than serious reasons for concern. After all, two power units for the Khmelnitsky NPP are just the beginning. In fact, Westinghouse has much more ambitious views and plans for the non-sale. We are talking about the construction of 2040 new reactors by the Americans by 14, including two completely new nuclear power plants with 4 power units each! And one of the main questions here: where exactly will these nuclear power plants be built?

According to representatives of Energoatom, specific locations have not yet been selected. Now "there is a discussion of more than three dozen promising locations." Nevertheless, the infographics presented during the presentation of this project clearly show that at least one nuclear power plant should appear in the East of the country. And this is quite logical - is it not in Western Ukraine, with its increased seismic activity and lack of infrastructure, to build such facilities? So it turns out that Russia now has a very real prospect of getting a new Chernobyl, Fukushima or something else worse at its own borders. Let's not forget, by the way, that at all currently operating Ukrainian nuclear power plants there will also be a dubious AR1000 reactor, which also does not inspire the slightest optimism. It is still possible to survive the loss of the Ukrainian TVEL market somehow, although it is both insulting and unprofitable. But a nuclear catastrophe is a problem of a completely different order.

It should be noted that initially in the Ukrainian-American memorandum, which was signed during Zelensky's trip to Washington, it was about 5 power units, the total cost of which was estimated at $ 30 billion. Specialized experts even then said that such a price was completely unrealistic. The figures sounding today of 10 billion for one reactor are much more realistic. At the same time, the question remains: where will Ukraine get such colossal sums for a complete renovation of its own nuclear power? Even if American bankers lend to construction, Kiev will have to pay them, and from what means? Therefore, we can only hope that the current project is an empty project, which is not destined to come true. Whether this is so - we will see on the example of the Khmelnytsky nuclear power plant, which, fortunately, is located as far as possible from our borders.
Reporterin Yandex News
Reporterin Yandex Zen
6 comments
Information
Dear reader, to leave comments on the publication, you must sign in.