"Eastern policy": Germany revolts against the United States and turns towards the Russian Federation 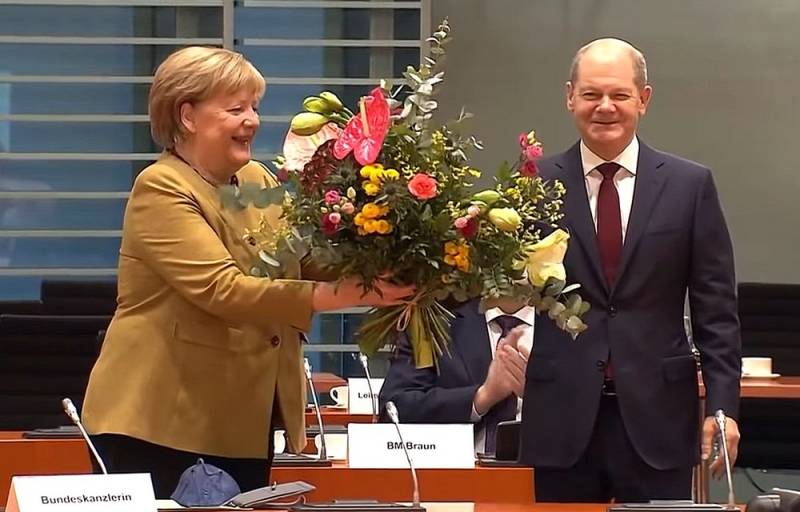 On November 24, the Social Democratic Party of Germany (SPD) announced the final agreement of a coalition agreement with the Alliance 90 / Greens and the Free Democratic Party (FDP). Trilateral consultations, held over the past month, first in 22 working groups and then among the top leadership of the parties, culminated in the signing of a 177-page agreement that takes into account the interests of each of the parties in the future governance of Germany. The final version of the agreement, presented at a joint press conference of the parties in Berlin, is expected to be a key basis for the formation of a renewed German government, which for the first time in sixteen years will be headed by a non-Angela Merkel.


Nevertheless, the new chancellor, who will become SPD leader Olaf Scholz, is far from the only innovation on the German political landscape. Judging by the events unfolding in recent days, in the next four years, Germany may well expect a cardinal reversal in the external policy, suggesting an improvement in relations with Russia and a deterioration - with the United States.

Even without being officially approved as head of the German government, the head of the SPD, who combined the post of finance minister with the position of vice-chancellor in Merkel's cabinet, was already trying to show his different view of relations in the east.

Willy Brandt's "Eastern Policy" served as a change that led to liberation. German reunification and European unity would have been unthinkable without Willy Brandt ... Now we need a new, European "Eastern policy"
Scholz said in a social media post on October 20.

This position of Scholz, obviously, was reflected in the final coalition agreement of the parties forming the government, which will become a "road map" of German politics for the next four years. And by the eastern direction of the policy, the new chancellor of the FRG, like his famous predecessor, who invented this political concept, had in mind first of all Russia.

Russia plays an important role as an international actor. We know the value of strong and stable relations and will strive to maintain them (...), taking into account different perceptions of threats and focusing on a common and coherent EU policy towards Russia
- emphasized in the document.

In addition, the coalition agreement separately emphasizes the need to establish closer ties between the Russian and German peoples.

We want to create opportunities for visa-free travel from Russia to Germany for particularly important target groups, for example, young people under 25
- noted in the text of the agreement, cited by Die Welt.

It is at a young age that friendships are most easily built and a worldview is formed, and the new German leadership, obviously, wants the relations of new generations in Russia and Germany to each other to avoid the negative impact dictated by anti-Russian propaganda coming from overseas. Incidentally, this is the most important indirect sign that in the long term Berlin is going to do exactly what to improve relations with Moscow. Indeed, today an increasing number of European politicians are becoming aware that sanctions are not forever, and the vector of interaction with Russia must sooner or later change in a positive direction. In contrast to Europe's relations with the same United States, for example, whose golden age of transatlantic power is only approaching its decline every day. And it is likely that it is Germany that will be at the forefront of the new anti-American thinking in Europe.

"Greens" sharply criticized the United States - with such a sensational for German politics news TASS spoke on November 24 with reference to the Reuters news agency.

New US sanctions are unacceptable even for opponents of Nord Stream 2,
- said the party's foreign policy expert Omid Nuripur in an interview with Reuters.

It is we, the Greens, who have always fought against the pipeline, who cannot understand what kind of friendship they are striving for if we impose sanctions against friends when they do business with a third party. The pipeline was and remains an erroneous German decision, but not an American one. "
- he stressed.

It is clear that the Greens have long been opponents of the Nord Stream 2 implementation. They are in principle opposed to the use of any fossil fuel, so this is not surprising. What greatly surprised the majority of political scientists and experts is that it was the “greens” who, until recently, were called the closest political force to Washington in Germany. That is, in fact, the mouth of their functionary against Washington was the closest German political allies.

The reasons for such a harsh statement are obvious. Indeed, just a day earlier, on November 23, the US Treasury Department once again imposed sanctions on companies and ships associated with the implementation of the Nord Stream 2 project. Cyprus-based Transadria Ltd., as well as the Russian-flagged ship Marlin, were included in a special blacklist, which lists individuals and legal entities, as well as vessels, with which both citizens and permanent residents of the United States are prohibited from cooperating. The basis for the introduction of new sanctions, as before, was the law "On the Protection of Energy Security of Europe", adopted by American lawmakers in 2019. Washington, apparently, is so used to treating Europe as its backyard that it is adopting separate bills in relation to it, designed to almost directly regulate any activity taking place in the Old World. And it is hardly worth expecting that European politicians will endlessly endure such boorish behavior. After all, who really likes it when a part of your sovereignty is de facto bitten off by an overseas empire that still thinks in terms of the Cold War?

It is worth noting that the situation around Nord Stream 2, which the United States is still trying to prevent from starting by interfering in the affairs of Europe and Russia, is just one of the factors throwing the FRG towards anti-American policy. The second factor is much more ancient in nature and is deeply rooted in the days when Germany was divided, and the United States and the USSR were actively fighting for spheres of influence in Europe. And his name is American nuclear weapons. Placed, by the way, on German territory is far from the first decade. For many years, the inhabitants of the Federal Republic of Germany have been in favor of his withdrawal from Germany, but to no avail. Moreover, independent opinion polls show that the idea of ​​withdrawing American missiles is supported by the overwhelming majority of the German population. Nevertheless, the vaunted democratic principles here apparently failed, and during the many years of rule of the conservative bloc CDU / CSU, this issue invariably escaped the German domestic political agenda.

However, with the coming to power of new persons, Berlin, apparently, is ready to take a course towards final denuclearization. Otherwise, it turns out to be a paradoxical situation: nuclear power plants in Germany are closed - the latter are planned to be stopped in 2022, and American atomic bombs still remain. So, apparently, the new government is seriously going to solve this problem with German pedantry - once and for all.

And apparently the US and NATO are inclined to believe this. Less than a week ago, on November 19, the organization's secretary general, Jens Stoltenberg, announced that American nuclear weapons could be deployed in Eastern Europe if the FRG decides to oppose their deployment on its territory. Speaking at a conference held under the auspices of the German Atlantic Society and the Federal Academy for Security Policy, Stoltenberg expressed his hope for the preservation of the American nuclear arsenal on German soil.

I expect that Germany will continue to be part of the system of joint use of nuclear weapons, this is very important for the whole of Europe, it is a multilateral format. (...) Of course, Germany has to decide whether [a foreign] nuclear weapon will be stationed in this country, but the alternative to this can easily be that nuclear weapons may end up in other European countries, in particular - to the east of Germany. "
- said Stoltenberg, obviously referring to the current leadership of Poland, always ready to please the overseas overseer.

Nevertheless, the fact that seemingly loyal "greens" have come out against the American missiles demonstrates that anti-American ideas in the German political field will occupy an increasing place in the coming years. After all, the rest of the parties from the newly formed ruling coalition have always treated Washington much more restrainedly.

Of course, it is still too early to draw conclusions about the future of Russian-German relations, given that the new government of the FRG has not yet begun its work. Nevertheless, one thing is clear already now: Germany, the first of the EU countries, is gradually beginning to "wake up" and realize that, in fact, it is occupied by the United States in the same way as many other EU countries - by the troops of their NATO military bloc. The United States is listening to top European politicians, placing nuclear warheads in the most advantageous corners of Europe and regularly interfering in the internal affairs of EU countries, seeking to play the role of a puppeteer pulling the strings. The difference in attitude is that in the case of the Federal Republic of Germany this has been going on for the past seventy-six years, which was more than enough to justifiably assess the true motives of American policy. So it is obvious that it is Germany that today has every chance to deploy the policy of the entire EU in an eastern direction and stand at the head of Europe's struggle for independence from the United States. And given the role of Washington in whipping up anti-Russian hysteria in the EU, we can say with confidence that this will ultimately lead, if not to a radical improvement in relations with Russia, then to their normalization - that's for sure.
Reporterin Yandex News
Reporterin Yandex Zen
6 comments
Information
Dear reader, to leave comments on the publication, you must sign in.