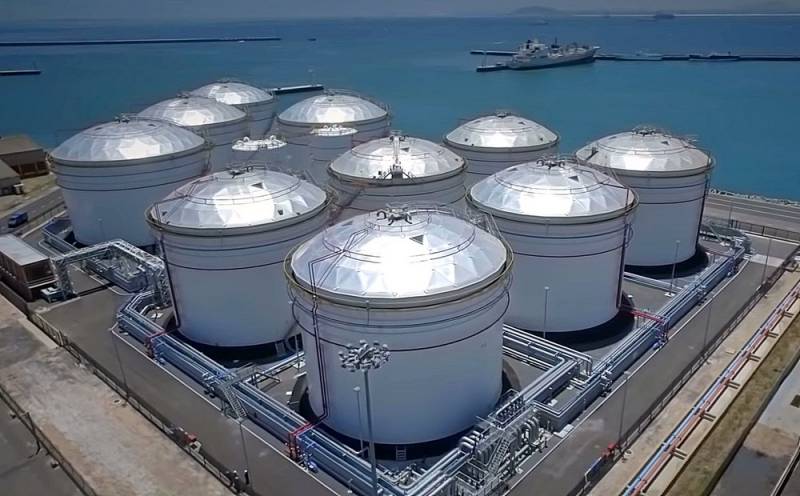 The United States will release 50 million barrels of oil from national strategic reserves to lower energy prices for American consumers. This was announced on November 23 by the leader of the United States, Joe Biden.

Today, the president announces that the Department of Energy will provide access to 50 million barrels of oil from the strategic oil reserve to lower prices for Americans and bridge the mismatch between demand emerging from the pandemic and supply.
- emphasized in a press release issued by the administration of the American head.

Thus, the United States officially announced an unprecedented in recent history intervention on the world oil market, which will affect both producers and consumers of "black gold" around the world.

The main reason for such a large-scale American intervention in the global oil market is the negative impact of price increases, noted in Biden's statement, felt by US residents "at gas stations and on their heating bills." So, in order not to expose American citizens, who are not accustomed to inflation levels above a couple of percent, unnecessary stress, and further reducing the already low personal rating, Joe Biden decided exactly a month before Catholic Christmas to present them with a gift in the form of cheaper energy resources. Well, if not to present, then at least firmly promise.

Oil prices have risen more than one and a half times since the beginning of 2021, and the United States, obviously, is extremely unhappy with this. And if something does not suit them in the geopolitical arena, then they begin to take action. And despite the fact that OPEC has recently increased production by 400 thousand barrels per day every month as part of the process of reaching pre-pandemic production figures, this is clearly not enough for Washington. And the price of oil seems too high to the American establishment, so it's time to intervene. After all, it is important to understand that Biden is to a much lesser extent than Trump ready for geopolitical adventures based only on his own vision, so it is obvious that the decision to adjust oil prices was made precisely at the level of the notorious “deep state”. Who thinks not only of consumers, but of the entire American the economy... Indeed, the largest single-stage reduction in oil production in history, which occurred in 2020, according to a number of economists, continues to negatively affect the US economy. As a result, since the beginning of the year, gasoline prices in the United States have risen by about a third, which has undoubtedly become an overwhelming burden for one of the richest countries in the world. So unmanageable that Biden a month ago declared the need to reduce them.

Obviously, a plan to intervene in the global economy was already developed then.

And after all, considerable efforts have been made to implement it. Nevertheless, having stirred the OPEC countries with their persistent attempts to push through the increase in oil production, the current US leadership nevertheless realized that it would not work to force the largest exporters of "black gold" to dance to their tune specifically on this issue. As they say, friendship is friendship, money is apart. And the largest oil-producing players from the Middle East were simply not ready to give up guaranteed oil revenues for the sake of American domestic political interests. Especially considering that Western countries are soon planning a complete phase-out of fossil fuels, which will undoubtedly bring down world prices.

However, having received an unambiguous refusal, official Washington did not despair and decided to use its other instrument - political resource in the form of the leadership of the countries of the collective West, obviously ready to subscribe to any American geopolitical adventure. As a result, a press release from the White House proudly, if not boastfully, notes that steps to bring energy prices will be taken not only by the United States, but also by a number of other developed countries, including Great Britain, Japan, India and South Korea. These countries agreed to follow the United States at the right time to print out the required volumes of strategic oil reserves in order to systematically bring down prices on the world market. Of course, the United States will not be able to replace OPEC by its actions, but of course it will not be possible to start playing the role of a price destabilizer. After all, the point is not only that gasoline in the States has risen in price, and it will be difficult for Biden to be re-elected. It is already clear that the issue of energy prices will become a key issue within the framework of the concept of energy transition adopted in the West. Consequently, the process of preparing for the "price wars" should be started now.

The United States and the Struggle to Preserve World Inequality

Analyzing the situation arising in the world energy market as a result of the actions of the United States and its allies, it should be understood that this is primarily an attempt to preserve the asymmetric nature of the state of affairs that has developed in the world. It is clear that with the collapse of the socialist bloc and the collapse of the USSR, the idea of ​​building capitalism has become key for most countries in the world. Nevertheless, the situation in which the rich get richer and the poor get poorer is gradually becoming the norm for the modern "pandemic" world and fair not only for individual societies, but also for entire states, which, of course, cannot but cause concern.

The developed countries of the so-called "Golden Billion" are making every effort to maintain their own standard of living, regardless of what consequences may threaten the less wealthy states. Moreover, this increasingly looks like a planned program, in which individual political decisions are not spontaneous attempts to solve immediate problems, but an attempt to build a new world order in which energy supply issues will be directly addressed by states, regardless of the principles of a market economy extolled by the West.

After all, it is getting worse and worse to continue solving the emerging economic crises by launching the printing press. For example, inflation in the same USA, which carried out unprecedented cash injections into its economy against the background of the pandemic, this month reached a maximum in thirty years - more than 6% in annual terms. And as noted above, this is already becoming a problem for the States, because their citizens are not used to this. Although in fact, such a sharp increase in the emission of the American currency has a negative impact primarily on the world, and not on the American economy, because four out of five dollars today circulate outside the United States.

Thus, each unit of American currency printed out of thin air means that the United States is getting into the pocket of every person on planet Earth. Moreover, even the one that never used the American currency and did not store savings in it. Alas, this is the essence of the modern financial structure of the world. The increase in demand for goods, triggered by the explosive increase in the dollar money supply, leads to supply shortages and higher prices. As a result, the United States is simply shifting the problems of its own economy onto the shoulders of other countries within the framework of the phenomenon known in economic science as the export of inflation. Washington prints money uncontrollably, simply taking advantage of the fact that the US dollar is the world's reserve currency and it accounts not only for most of the mutual settlements in the world, but also for most of the foreign exchange reserves of countries.

Nevertheless, even exporting inflation was not enough to solve the problems of the United States, and they decided to take the simplest path - to cut costs. As you know, the economy of developed countries is largely built on the cheapness of imported manufactured goods and energy resources. And the rise in oil prices has banally led to the fact that American citizens and companies have to spend more, which, according to Washington, of course, is a threat to the stability of the existing economic system, which must be eliminated. The current distorted balance of redistribution of financial resources between rich and poor countries must be maintained at all costs. And of course, you shouldn't even think about the consequences for other states. Although exactly what is an item of expenditure for the economies of developed countries, for the oil-exporting countries is the most important source of budget replenishment. Thus, the declared noble goal of helping American consumers, in fact, will be achieved at the expense of lost profits, expressed in additional funds pulled from the economies of other countries, already suffering from inflation exports.

Thus, it becomes obvious that the impending large-scale interventions on the world oil market, prepared by Washington and its allies, are only part of a much larger project designed to maintain global inequality at the same level. And the United States not only does not want to give up its existing absurdly disproportionate geopolitical positions in comparison with other powers, but, on the contrary, is striving with all its might to undermine any international associations that dare to disobey their will. The signal about this to the world can now be traced quite clearly. It does not matter whether it is OPEC or some other organization, if it does not agree to fulfill the will of the States, the result will be obvious - war. In this case, so far only economic.
Reporterin Yandex News
Reporterin Yandex Zen
17 comments
Information
Dear reader, to leave comments on the publication, you must sign in.