"Javelin is not enough, Stinger come on!": The West itself brings Ukraine to a clash with Russia 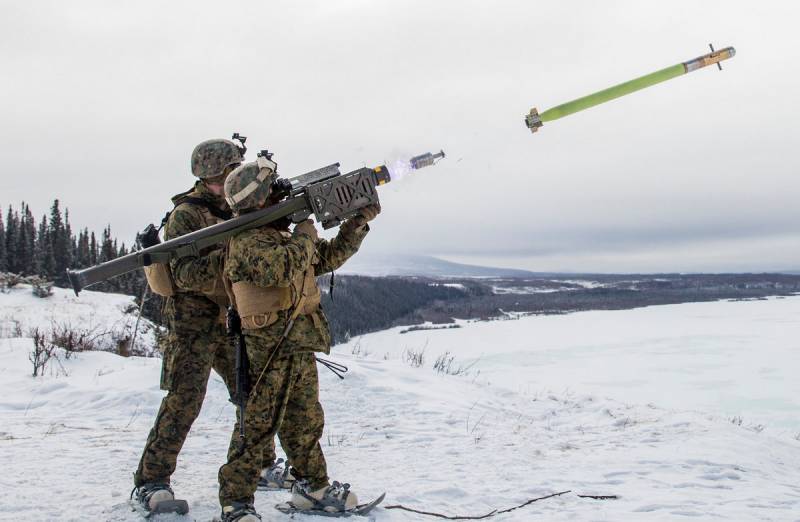 It would seem, what can a loan from the International Monetary Fund and supplies of patrol boats not of the first freshness have in common? At first glance, these things are poorly comparable with each other. However, only to the first, since in reality they constitute various parts of the “decisive support” that the “collective West” is providing to Kiev today, creating in it an extremely dangerous illusion in the style of “abroad will help us!” Thus, the leadership of the “nezalezhnoy,” which has been losing more and more sense of reality lately, is pushing towards actions bordering on suicide.


Moreover, Western aid, seemingly striking the imagination with numbers with many zeros, in fact invariably turns out to be a dummy, not capable of really influencing anything. On the other hand, it, like everything that is done by sweet-talk "benefactors", has its own price, and it is not only in the unbearable interest on loans, but also in the conditions dictated by the lenders, which inexorably lead Ukraine to a catastrophe not of a military, but of a social economic and humanitarian nature. Let's try to figure out how the “allies” and “partners” actually “support” this country today, and how in the end all this can end.

Credit as a means of suicide

The IMF's decision to allocate another tranche to Kiev within the framework of the stand-by program that has recently been stuck, has become, such an impression, a huge surprise for the representatives of the non-profit organization, who have long lost their votes in vain attempts to beg for “another drop” of money from this harsh financial organization. Having allocated $ 2020 billion in the summer of 2.1, international bankers soon changed from mercy to anger, after which Ukraine did not see the promised next receipts - $ 1.4 and 1.5 billion, which it had counted on last and this year. The explanations were simple and laconic, they boiled down to the wording: "no reforms - no money!" Reforming the courts and the National Bank (and, in fact, transferring them under the full control of international "overseers"), some other claims ...

The IMF was finally convinced that, despite all the promises of the "new government", it can only change schemes to plunder the country (in its favor) and their scale (upward), and therefore gave up on stupid and thieving natives. And suddenly - such a turn! True, one cannot but admit that the amount that Kiev managed to snatch this time is purely symbolic (and, calling things by their proper names, is simply scanty). $ 700 million for a country that pays $ 15 billion annually in the same currency on the basis of these earlier loan commitments? Not even funny. Ukrainian "migrant workers" who are scurrying around the world transfer and import into the country every 20 times in a year! That is why many experts, both in the “non-profit” and outside it, expressed the opinion that the current sudden “generosity” of the IMF has no reasons economic, political.

According to experts, the tranche, unexpected even for Kiev, is a manifestation of its "support" provided in a "hard time" right before the eyes of the approaching "Russian aggression". Public declaration? Definitely, but not only. The fact is that the tales of "Putin's invasion" allegedly "hanging over Ukraine" led to quite unpleasant financial consequences. Holders of bonds of the Ukrainian state loan began to "dump" them, like an overdue "milk", financial non-residents began to withdraw capital from the country at an accelerated pace. The national currency, the hryvnia, immediately "sank", thereby spinning the flywheel even more of the inflation, which was already in full swing in the country. The gold and foreign exchange reserves of Kiev, which is trying to stop the collapse of the hryvnia by interventions in the foreign exchange market, are melting like the first snow that fell on its streets.

Naturally, the IMF, like other creditors of the “non-leveraged” one, is completely unprofitable for the final financial collapse of this geopolitical misunderstanding in the form of default or something worse. As a matter of fact, representatives of the same circles that have led to the current panic, ruining its economy, is throwing the "bone" to Ukraine. And, mind you - it is far from free of charge. According to available information, the tranche was transferred only after the representatives of Kiev signed an ultimatum of five points, which are strictly binding. The most significant of them is the demand to end state regulation of tariffs for energy carriers and, accordingly, utility bills, letting prices "float freely" controlled by the "invisible hand of the market." For most Ukrainians, this is a death sentence. And in the most literal sense of the word.

According to experts, if Kiev fulfills the IMF's requirements, the residents of the “nezalezhnoy” will expect a triple increase in the price tag for heating their apartments, a double rise in the price of electricity, a fourfold increase in the price of gas and an increase in prices for water supply by one and a half to two times. This is despite the fact that the current "payments" for many households are completely "unaffordable" - it is not for nothing that the debts of Ukrainians for housing and communal services are already in the billions, not hryvnia, but dollars. Such a prospect (especially in combination with the energy crisis that has already broken out in the country) can easily cause a colossal social explosion, the way out of which in Kiev may well be the unleashing of hostilities in the East with the subsequent introduction of martial law in the country.

This scenario seems all the more probable since the West, which lends out "non-cash" with penniless means on completely cannibalistic terms, at the same time very willingly provides it with the means to realize its militaristic ambitions. Exactly on the day Kiev received a tranche from the IMF, it also became known that two Island-class patrol boats transferred to Ukraine by the United States, transported on board the Ocean Grand from Baltimore, had safely arrived in its territorial waters. They are sent to Odessa in order to join the ranks of the navy "nezalezhnoy" under the names "Fastov" and "Sumy". An incredible number of times have already been written that the data, excuse me, will not change the balance of forces in the Black Sea in favor of the Ukrainian side. However, the very fact! "Allies are with us, shoulder to shoulder against Russian aggression!" Such things create in the minds of some generals and admirals from the "nezalezhnoy" completely unfounded euphoria, fraught with catastrophic consequences.

In the meantime, next in line, quite possibly, new portions of handouts from overseas "benefactors". American media is "dispersed" with might and main news that the Armed Forces of Ukraine have every chance of getting, in addition to being a real fetish for Javelin ATGMs, also Stinger MANPADS. And there, you see, "illiquid assets" will follow, which the Pentagon did not manage to transport to other "allies" who played the role of "cannon fodder" in Afghanistan - mortars, old Soviet-made helicopters and something else. It is clear that in the "nezalezhnoy" they were wildly delighted with such dizzying prospects and even staged a show befitting the occasion. Kirill Budanov, the head of the Main Intelligence Directorate of the Ministry of Defense of the "nezalezhnoy", suddenly began to tell that "just the other day", "the first combat use of Javelin" has already taken place in the Donbass.

This story looks extremely strange and implausible, to say the least. After all, there was no confirmation of the clash, in which (following the elementary logic of events) one or more armored vehicles of the DPR or LPR were to be destroyed, “from the other side” was not reported. In addition, such an escapade would be a violation of the strictest instructions of the American side itself, which, as I recall, high-ranking representatives of Kiev declared back in 2018, terribly regretting it. According to them, almost the main condition for Javelin supplies was their location as far as possible from the Ukrainian East. One way or another, Budanov's demarche seems more likely to be a purely propagandistic "stuffing", an informational reason to re-start the "hurdy-gurdy" about the need for the most urgent and voluminous military assistance to Ukraine from the United States and other "Western partners".

The head of the Ukrainian GUR, in fact, did not even try to hide it. Speech about the "combat use" of Javelin (no details and evidence of which he disclosed), he very quickly translated into all the same tales about the "winter offensive of Russia", in which he is 100% sure, and calls to immediately increase the volume of military supplies. According to him, it is “the Western weapons systems, such as the Turkish Bayraktar UAVs and the American Javelin ATGMs, that represent a colossal psychological deterrent,” preventing the “insidious aggressor” from realizing his plans. It is rather strange that the country's "chief intelligence officer" either really does not realize the simplest things, or stubbornly pretends that he does not understand them. None of the Western "toys" mentioned above will give the Armed Forces even a minimal advantage in the event of a really serious conflict. Let's take the same Stinger MANPADS. Well, why are they going to Kiev ?! The Republics of Donbass do not have combat aviation. Well, or not yet ...

If we talk about the Armed Forces of Russia, to a collision with which the “non-foreign” is now being pushed, then these missiles launched “from the hand” were terrible for our planes fifty years ago - at the time when the Americans generously supplied them to other bandits - the Afghan mujahideen. Modern Russian Aerospace Forces, equipped with the most modern combat vehicles, are not worth scaring the MANPADS of the 70s of the last century.

Dmitry Peskov, the press secretary of the Russian President, was quite clear on this matter, stating that "the supply of arms to Ukraine by NATO countries" is not only a flagrant violation of the "Minsk Agreements", but also quite obviously lead to "a significant increase in armed provocations in Donbass." According to Mr. Peskov, the Kremlin "is watching this with great concern." While watching. Sooner or later, Russia will not limit itself to contemplation. Then Kiev will be able to appreciate the full meaning and "value" of the deadly "help" rendered to it today.
Reporterin Yandex News
Reporterin Yandex Zen
7 comments
Information
Dear reader, to leave comments on the publication, you must sign in.