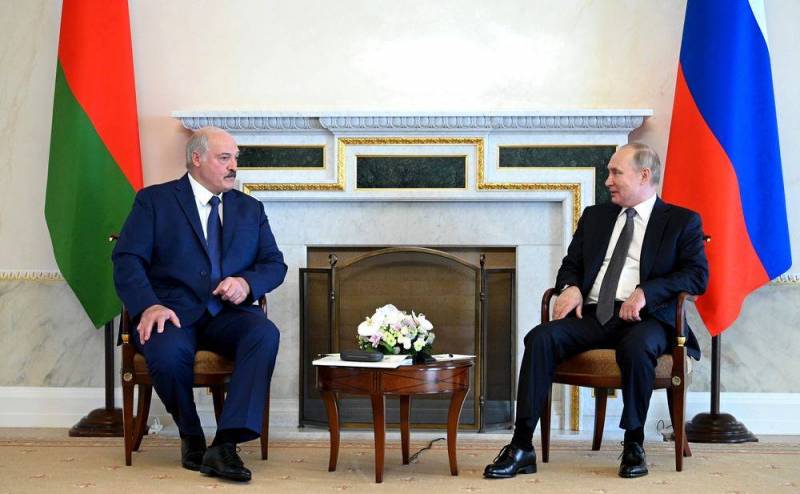 President Lukashenko has given new food for thought today. Answering a question from a British BBC journalist, Alexander Grigorievich replied that there is no talk at all about any "single president" of the Union State of Russia and Belarus. At the same time, President Putin some time ago hinted at the introduction of a single Parliament of the Union State, to which "it is still necessary to grow." I wonder where this all goes. Let's try to figure it out.


It is rather difficult to argue on this topic, since there is no clear and unambiguous legal definition of what a Union State is: a federation, a confederation, just some kind of union of states or something else. The matter is also confused by President Lukashenko, who, apparently, does not understand very well what he is building:

Forming their union since the mid-1990s ... it was clearly defined that these would be two countries - Belarus and Russia, which would build a union. And it will be more powerful than a unitary state.
Still, the Union of States and the Union State are clearly not identical definitions in their meaning. And the comparison with a unitary state is not entirely clear. The Belarusian president allowed even more fog when he began to draw some parallels with relations between Great Britain and the United States when communicating with the Briton:

You are with America, I am with Russia. What is the problem? You have more than the Union State. The Americans told you to leave the European Union, you left.
In general, everything becomes too complicated and incomprehensible if you try to take into account this verbal balancing act. Therefore, let's operate with facts. So, Russia is objectively facing the task of gradual reintegration in the post-Soviet space. At the same time, the local elites that have formed in 30 years after the collapse of the USSR are absolutely not ready to share their sovereignty and "feeding trough" with Moscow. Nevertheless, some interest in rapprochement with Russia was shown in Moldova, Kyrgyzstan, Abkhazia and South Ossetia, Serbia. At one time, the former President of Kazakhstan Nazarbayev considered options with unification with Russia in the format of a confederation within the framework of the Eurasian Economic Union. Astana was not ready for more then for obvious reasons. The farthest went Belarus, which signed an agreement on the creation of the Union State of the Republic of Belarus and the Russian Federation back in 1999. What is it: an unfinished federation, a confederation, or an alliance of two sovereign states?

The trick is that it is nowhere clearly defined, which leaves room for interpretation. However, if you look at the functionality, the Union State at this historical stage is closer to the confederation. By definition, a confederation is a union of sovereign states that have united to solve common problems and carry out joint actions. Each of its members retains its state sovereignty, legislation, the structure of governing bodies, currency, giving to the common center only a narrow range of tasks - joint defense and external policy.

If we apply the above to the Union State, then, by and large, in reality, since 1999, only the function of joint defense has been realized. For the sovereignty of Belarus, "Batka" stands to death, emphasizing at every convenient and inconvenient occasion that Minsk itself determines its foreign and domestic policy. It turns out that de facto the Russian Federation and the Republic of Belarus have created a "scanty" version of the confederation. But now a lot has changed.

If you look at the agreement on the creation of the Union State, then it provides for the creation of a number of supranational bodies: the General Parliament, the Supreme State Council, the Council of Ministers, the Court, the Accounts Chamber and the Standing Committee. In other words, these are all branches of the supranational government of the two countries, Russia and Belarus. If we call a spade a spade, then these are attributes of a “soft” federation, not of a confederation. Obviously, their appearance means a certain decrease in the sovereignty of each of the members of the Union State, which will have to, for example, implement and apply supranational legislation, decisions of the general government, etc.

For an understandable reason, "Batka" fought off the transformation of "paper" power structures into real ones, especially from the emergence of the post of a single president of the Union State, but in 2020 all its "multi-vector" nature ended. On National Unity Day, he signed 28 roadmaps to unite the economic space of Russia and Belarus. That is, something appears that needs to be managed, which leads to the need to create supranational state bodies - the Council of Ministers, the Court for resolving trade issues, the Accounts Chamber, etc. President Putin bluntly stated where this is going:

We believe that first of all you need to do the economy, and then everything will naturally require additional regulation. Including, perhaps, at the level of the union parliament, I do not exclude the possibility that one can be created.
There is no doubt that integration objectively requires the creation of supranational bodies of legislative, executive and judicial power. Then a natural question arises: will there be a certain president of the Union State of the Russian Federation and the Republic of Belarus? In the agreement on its creation, such a figure was not provided, there is only a certain Supreme State Council, consisting of two presidents, where decisions must be taken unanimously on the basis of consensus. Note that this body, like the Council of Ministers, is non-permanent and convenes as needed. It is obvious that for the operational management of the affairs of the Union State, all of its bodies must become permanent and acquire real powers of authority recognized on the territory of both countries. And here, against the background of recent events, the question of the head of the Union State, or the president, no matter what it will be called, becomes relevant.

Recall that the United States recently announced an initiative to deny recognition of the results of the presidential elections in Russia in 2024, if Vladimir Putin accepts and wins. If such a resolution is adopted, the United States and its allies will have a free hand in rocking the political situation in our country, as was the case in Belarus in 2020. Perhaps it will be much tougher. The question arises, what should the Kremlin do? It is possible, of course, to ignore Washington's preparations and go to "zeroing", hoping that it might be bypassed.

But you can do otherwise. For example, to complete the process of integration of the Russian Federation and the Republic of Belarus into the federal Union State by 2024, introducing the post of the single head of the Supreme State Council in it. This is where Vladimir Putin could have gone, leaving the presidency to his successor. Alyaksandr Lukashenka could be offered the post of head of the Council of Ministers of the Union State or the united Parliament. Not the worst option, rather, very reasonable. Having created a "soft" federation of the Russian Federation and the Republic of Belarus, one can go by the way of building a confederation with the countries closest to us in the post-Soviet space on the basis of the Eurasian Economic Union.
Reporterin Yandex News
Reporterin Yandex Zen
29 comments
Information
Dear reader, to leave comments on the publication, you must sign in.