A new threat to the world: AUKUS begins to spread nuclear technology 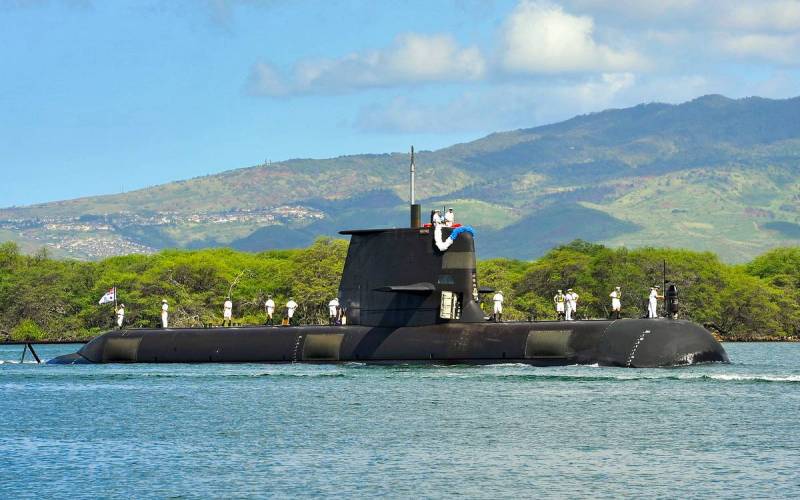 On November 22, Australia, the United Kingdom and the United States signed the first trilateral agreement under the new military bloc AUKUS, involving the exchange of information on naval nuclear power plants. As reported by TASS with reference to the AFP news agency, the agreement was signed in Canberra by Australian Defense Minister Peter Dutton and the US and British ambassadors.

An agreement with the United States and Great Britain on the exchange of information on nuclear power plants of the Navy will allow Australia to become a reliable and responsible partner of these countries in using the latest of technologies
- said the head of the Australian defense department.

Earlier it became known that on Friday the agreement was approved by US President Joe Biden, who stressed that its implementation "would not pose an unreasonable risk to the collective defense and security" of the three states. However, what the American leader chose not to talk about was the inevitable risks to global security that the implementation of such an agreement entails. There is no doubt that they will be.

The creation of a new military bloc AUKUS, which was announced in September this year, was apparently intended to strengthen the geopolitical position of the United States and strengthen the concept of the so-called "Anglo-Saxon peace." In turn, the agreement on the construction by the Australian side of at least eight nuclear submarines, equipped with the latest American military equipment, became the main agreement reached within the framework of the formation of this alliance. Nevertheless, the more thoroughly the situation around AUKUS is analyzed, the more strange it looks. Especially from the point of view of the official Canberra and the real prerequisites for such a hasty consent to all the conditions of Washington and London.

After all, if Australia already had a signed contract for the supply of submarines with France, why was it necessary to tear it up so loudly? Not only did this seriously worsen the country's relations with official Paris - the French Foreign Minister called Australia's decision "a stab in the back" and declared "devoted trust", but also a penalty will have to be paid under the contract. After all, the fact that it will never be fulfilled does not mean that you will not have to pay. According to the executive director of the French state corporation Naval Group Pierre Eric Pommel, the penalty may significantly exceed the costs actually incurred by his company for the design of new submarines. Pommel assumes that the amount of compensation for breaking the agreement will include, among other things, the future costs of production infrastructure and the redeployment of employees and, as a result, will exceed a billion dollars. This billion, blown into the wind, above all, is important evidence proving that before the Americans made the offer, the Australians had not heard of any future military blocs. Too large a sum at stake, even for a seemingly developed Australia.

It is clear that part of the losses can be covered by the American side, but joining the new bloc does not imply a formal ban on the purchase of weapons by Australia. Yes, and the contract could not have been completely broken, so as not to heat up tensions in relations with France, but simply to reduce. It would have looked much more logical and diplomatic. There is a serious difference between the quantitative reduction of the volume of the contract and its complete break, tangible even at the level of interaction between commercial enterprises, not just international relations.

However, the Australians decided to cancel the contract, regardless of any costs, both financial and reputational. And it all looks more like as if someone persistently convinced them of this. Someone who categorically does not want any other side to be somehow involved in the situation with Australian submarines and the technologies supplied to them in the coming years. One area, related technologies, classified information may well leak ... Especially if it potentially violates the most important international agreements on such a sensitive topic as the proliferation of nuclear technologies.

To call a spade a spade, having reached an agreement on the transfer of information related to nuclear power plants to Australia, the United States and Great Britain took the first step towards the gradual transfer of dual-use technologies to the country, i.e. potentially capable of being used in the development of nuclear weapons.

But Article 1 of the UN Treaty on the Non-Proliferation of Nuclear Weapons of June 12, 1968 directly prohibits this. According to the treaty, each of the participating States with nuclear weapons undertakes the obligation “not to transfer nuclear weapons to anyone (...), as well as control over such weapons (...), either directly or indirectly; nor in any way assist, encourage or induce any non-nuclear-weapon State to manufacture or acquire (...) nuclear weapons or other nuclear explosive devices, or to control such weapons. "

By the way, the nuclear nonproliferation treaty was ratified by all the AUKUS bloc member states, two of which, by a strange coincidence, are nuclear powers, and the third is not. And it is to the third party - Australia, that the transfer of information about nuclear power plants is suddenly planned. As a result, the question inevitably arises, how exactly does the fact of transfer of such technologies to a non-nuclear power by the United Kingdom and the United States compare with the nonproliferation treaty? Was it assessed by the representatives of the IAEA, UN and other international organizations? When it comes to the construction of Russian nuclear power plants in Iran, for example, the collective West, led by the United States, always sharply activates and loudly declares a violation of international obligations. And in this case, for some reason, deathly silence reigns in the international arena. Apparently, it is very unprofitable for someone overseas to raise this topic, and this “someone” broadcasts this idea to his satellites.

After all, it was no coincidence that Biden stated that there were no risks for the collective defense of precisely three countries: the United States, Great Britain and Australia. It is obvious that the more "natural" Anglo-Saxon allies of Washington possess nuclear weapons, the stronger will be its position in the geopolitical arena. Thus, by exporting nuclear technology to Australia, and not through a peaceful, but that through a military, that is, a secret line, the United States, in theory, may well try to circumvent the nuclear non-proliferation treaty. After all, it is not hard to guess that all data transmitted by the United States and Britain to the Australian side under the new agreement will carry an exclusively highest level of secrecy, that is, access to them will be strictly limited even within the framework of the top military leadership of the countries, let alone foreign observers. In Australia, by the way, unlike the nuclear powers, large-scale checks on the "nuclear line" are not carried out due to its almost complete absence of any nuclear technologies.

The construction of a nuclear power plant on the “green continent” was completely prohibited by the laws “On nuclear and radiation safety” and “On environmental protection and conservation of biodiversity” adopted back in 1998. The only exception is the Opal isotope research reactor, which has a capacity of 20 MW. Nevertheless, Australia has some of the world's richest uranium reserves and is a major supplier to the international market. That is, in fact, it has all the necessary conditions for creating its own atomic bomb. The necessary technologies are owned by the United States and Great Britain, which have just concluded a military alliance with Australia. Raw materials - uranium, there is plenty. Polygons for testing - as many as you like. The vast, almost uninhabited land in the center of the Australian continent is ideal for nuclear tests, it was not for nothing that the British tested their atomic bomb there.

The only problem is that it is not openly possible, even for the United States, to begin the process of transferring military nuclear technology to the Australian military. Too much resonance will cause such a gross violation of international agreements. Much easier and more cunning - to gradually begin to transmit information through related areas. Such as the construction of nuclear submarines, for example.

As a result, a situation threatening geopolitical stability is now emerging in the world, and the new American military bloc AUKUS directly threatens global security. After all, the United States may well begin transferring dual-use nuclear technologies to its Anglo-Saxon allies in the very near future under the pretext of ensuring its own defenses. Donald Trump has already demonstrated to everyone that Washington is free to withdraw from any international agreements, practically without any consequences for itself.

Only this time, the withdrawal of the United States from the nuclear non-proliferation treaty will inevitably upset the fragile global balance of power in this area. And the result of this is quite easily predicted even now - a further escalation of tension in the geopolitical arena, which could lead to a new world war.
Reporterin Yandex News
Reporterin Yandex Zen
1 comment
Information
Dear reader, to leave comments on the publication, you must sign in.